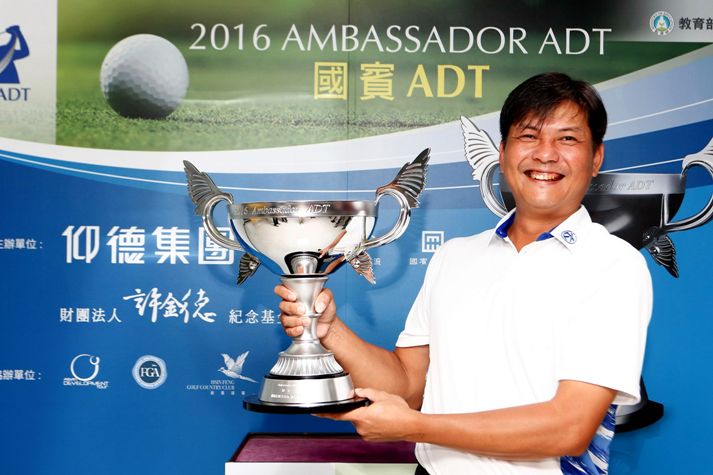 Lin Wen-ko of Chinese Taipei cruised to an eight-shot victory at the US$120,000 Ambassador ADT on Sunday to give himself hope of reviving his professional golf career.

Lin, who has been struggling with a hip injury since 2003, closed with a one-under-par 71 to win his first Asian Development Tour (ADT) title with a stunning total of 20-under-par 268 at the Hsin Feng Golf and Country Club.

Lu Wei-chih of Chinese Taipei fired the low round 63 to finish second while Thailand’s Poom Saksansin ended his campaign a further shot back in third place on a 278 total to move to fourth position on the ADT Order of Merit.

The 41-year-old Lin enjoyed a career breakthrough on the Asian Tour when he won the 2003 Taiwan Masters but had to stop playing professionally after undergoing a hip surgery in the same year.

He felt pain in his hips after the surgery and was forced to put his career on hold as he became a full time teaching professional. It was only in 2013 when he continued training again.

The victory propelled him to fifth place on the ADT Order of Merit and he is determined to stay inside the top-five on the final Merit rankings to regain playing rights on the 2017 Asian Tour season.

“It was disappointing but I had to replace my hips after getting hit by a car about 13 years ago,” Lin explained. “It was only three years ago I didn’t feel any pain when I swung a club and that’s when I trained again regularly.”

“This victory means so much to me. It was nice to see the home fans come out to support me even though it was raining. After going through so much, this is a very memorable victory for me. It is nice to taste success again after so long,” said Lin.

He dominated the Ambassador ADT from start to finish, thanks to his local knowledge on his home course. With the win, he earned six Official World Golf Ranking points and won US$21,000.

“It was tough today as compared to previous rounds. You can tell from the scores. It was raining and I had to play safely. Luckily I had a big lead,” smiled Lin, who held an overnight 11-shot lead.

Lu produced the round of the week thanks a hot putter after making 21 putts in a round of nine birdies. He is also on a comeback trail after having a brain tumour surgery slightly more than three years ago.

“I still feel tired after every round but my game is coming back. I’m starting to feel confident again but I need to improve on my fitness. This is a good result for me and I hope it will give me a boost for the remainder of the season,” said Lu.

The baby-faced Poom, who traded three birdies against one bogey, was delighted to finish third and move into the top-five on the Order of Merit.

“My goal is to earn an Asian Tour card. I really hope I can achieve that. I don’t really care if I win. I just want to continue playing well and finish inside the top-five on the final money list,” said the 22-year-old Thai.