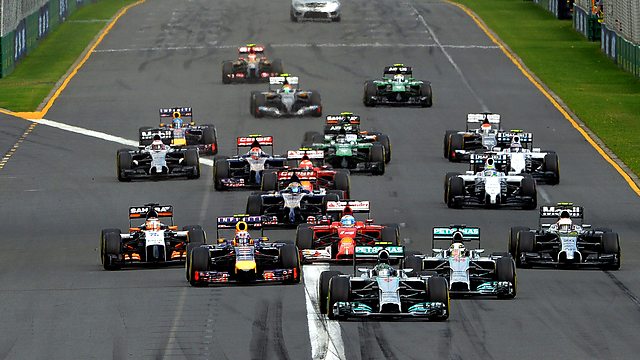 A list of the 18 confirmed drivers for the 2015Formula One season ahead of the first practice session of the season in Jerez on Sunday.

After a troubled final season with Red Bull, the four-time world champion will carry the hopes of delivering a first world title for Ferrari since 2007.

The Finn was the last man to deliver a title for Ferrari, but failed to live up to expectations on his return to the Italian team last season as he finished 12th in the drivers’ standings without a podium finish in 19 races.

The Mexican will be looking to prove his worth having penned a multi-year deal with Force India with an improvement on last season’s 10th-placed finish in the drivers’ standings expected.

Hulkenberg regularly outperformed his teammate last season to register a career best ninth in the world championship. However, he will be targeting an elusive first podium in 2015.

Grosjean will be hoping for a return to his 2013 form after a disappointing season riddled with retirements last season, although much will depend on the competitiveness of his Lotus car.

Maldonado fared even worse in the luckless Lotus in 2014 with just two points to his name, but the Venezuelan has maintained his seat in Formula Onefor a fifth consecutive season.

Alonso’s quest for an illusive third world title has taken him back to McLaren, where he suffered a turbulent year in 2007 marked by his frosty relationship with then rookie teammate Lewis Hamilton and McLaren being expelled from the constructors’ championship and fined $100 million for spying on Ferrari’s technical data.

2009 world champion Button will be under pressure to perform after being left waiting until December to know for sure that he would have a seat for a 16th consecutive season, just edging out Kevin Magnussen for the right to be Alonso’s teammate.

Fresh from a second world title and 11 race wins in 2014, Hamilton rightly starts as favourite for a third drivers’ title presuming Mercedes new model can live up to the standards it set last year.

Rosberg’s remarkable consistency that saw him finish outside the top two only four times in 19 races would have been enough to deliver a maiden world title in plenty of other years. A new season offers a new chance to renew his sometimes tense rivalry with Hamilton.

Australia’s Ricciardo will be hopeful of building on a sensational first year with Red Bull as he outperformed Vettel to claim third place as best of the rest behind the two Mercedes in the drivers’ championship.

At just 20, Kyvat already has a full season of F1experience behind him at Toro Rosso, but the demands will be much higher as takes the step up into Vettel’s shoes.

Ericsson has switched from the financially stricken Caterham to Sauber after a debut season to forget in which he failed to register a point in 16 races before the money at the Malaysian team ran out and he was replaced by British rookie Will Stevens for the final race of the campaign.

Former Formula 3 champion Nasr will make his bow as an F1 driver this season after performing test duties for Williams last season.

At just 17, Dutch wonderkid Verstappen will become the youngest ever F1 driver when he takes to the grid in Australia come March. Son of former Formula Onedriver Jos Verstappen, he takes the step up after just one season in Formula 3 during which he recorded 10 victories.

Another of rich motor sport heritage, Sainz Jr is the son of former World Rally champion Carlos Sainz and will also be making his F1 bow at just 20 years old.

The veteran Brazilian enjoyed a return to form at the end of 2014 with back-to-back podiums to finish the season as Williams moved ahead of Ferrari in the constructors’ championship, but he was still second best in his own team behind Valtteri Bottas.

Bottas overshadowed his countryman Raikkonen to finish fourth in the world championship in 2014 with four podiums. Staying ahead of the likes of Vettel, Alonso and Button may prove a big challenge this season.