Home 2020 Duplantis turns his attention to next major targets 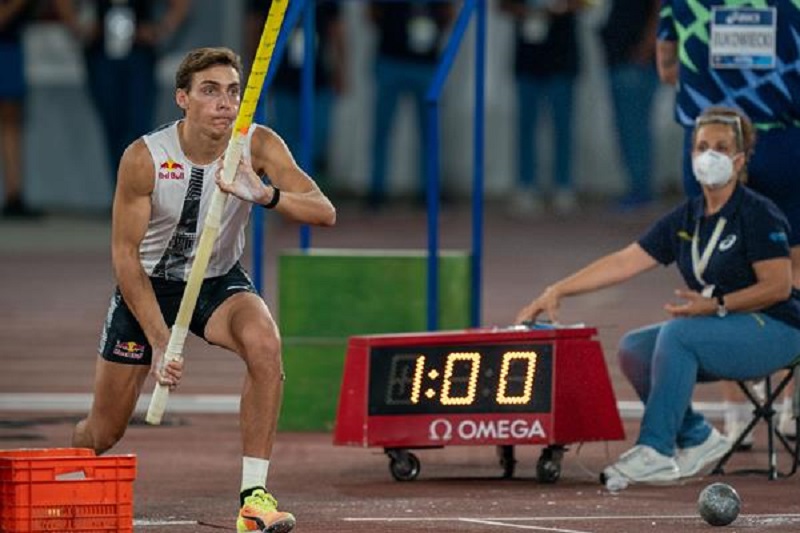 The world records are not enough for Mondo Duplantis.

Fresh from recording the highest outdoor pole vault clearance in history at the Wanda Diamond League meeting in Rome last night, the 20-year-old mapped out his plan for total world domination over the coming years.

None of that plan will come as a surprise to his closest rival, two-time world champion Sam Kendricks, who did not compete in Rome but noted recently: “We saw him coming”.

At every age since his father began teaching him when he was still a toddler, Duplantis has been a pole vaulting phenomenon, in the vein of golfing great Tiger Woods.

He is not only undefeated since taking the silver medal behind Kendricks at the World Championships in Doha last October, he has barely been challenged. But he said this week that he never took winning for granted.

That it was always his first priority when he entered the arena.

He has one more competition to come this year – the final Diamond League meeting in Doha on September 25 – but he has already blazed across the athletics firmament this year.

In February, he set world records of 6.17m and 6.18m on the World Athletics Indoor Tour, the highest anyone had ever jumped in any venue, indoors or outdoors.

But he was not content with that because he still didn’t have the highest outdoor jump. That remained the domain of Sergey Bubka, whose 6.14m monument from 1994 had stood unattainable for 26 years.

“If you want to be remembered as the best ever, you have to get it right when the moment is right and when you really need to. I like to think of myself as a big-time performer and I can get it done when it counts but you have to go out there and prove that.

“So when it comes time for the Olympics, World Championships, even the next European Championships, I will go there and get it done and try to be on top of the podium, because you can jump as high as you want but if you can’t do it when it counts…’’

But Duplantis has made his intentions for that clear from the opening Diamond League meeting in Monaco little more than a month ago in this shortened outdoor season. He has attacked the benchmark relentlessly over the last month, taking 13 attempts at 6.15m across five different competitions before he arrived in Rome this week.

None of those were closer than his first attempt at the Stadio Olimpico last night, when he was over the bar but dislodged it with his chest as he began his descent.

However that gave him confidence that this would be his night.

In the absence of his parents Greg and Helena, who have coached him since he was a small child, he turned to his big brother on the circuit, former world record-holder Renaud Lavillenie as his ‘replacement coach’.

Duplantis asked if he should move his run-up in slightly to get more penetration on his vault, but Lavillenie, a supreme technician, advised that he just needed to put a little more force into the pole at the moment he planted it.

On his 15th attempt at the historic height, he got everything right and soared over the bar before celebrating in the freefall back to the earth.

“I hit the mat but I haven’t really fallen back to earth,” a delighted Duplantis said afterwards.

“I think I’m still up in the clouds right now. It’s just one of those feelings where you are kind of dreaming a little bit… It’s surreal, it’s surreal, it’s a super-crazy feeling when everything lines up like that and you do a really good performance.”

His only regret was that neither of his parents were there to see it live.

“Usually one of them is with me (so) I am a bit disappointed about that,” he said. “My dad has never been with me when I jumped a world record.”

Given his son’s youth and extraordinary ability, Greg Duplantis is likely to have plenty more opportunities.

It’s a shame that so few people witnessed this performance live, after the local authorities ruled that the meeting organisers could not admit spectators to the cavernous Stadio Olimpico. But that is the new normal in this pandemic year and it didn’t impede Duplantis at all. – Nicole Jeffery for World Athletics