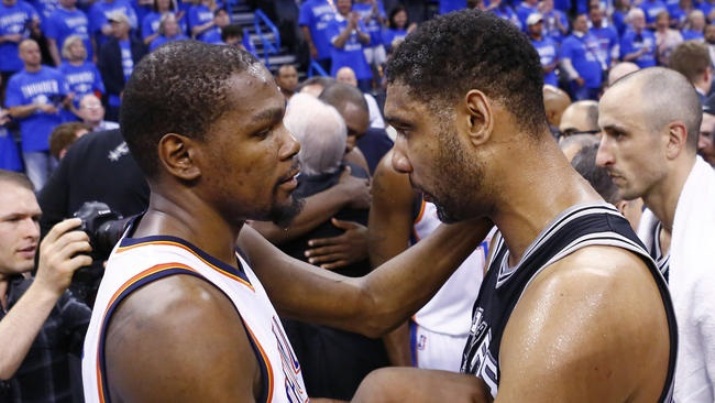 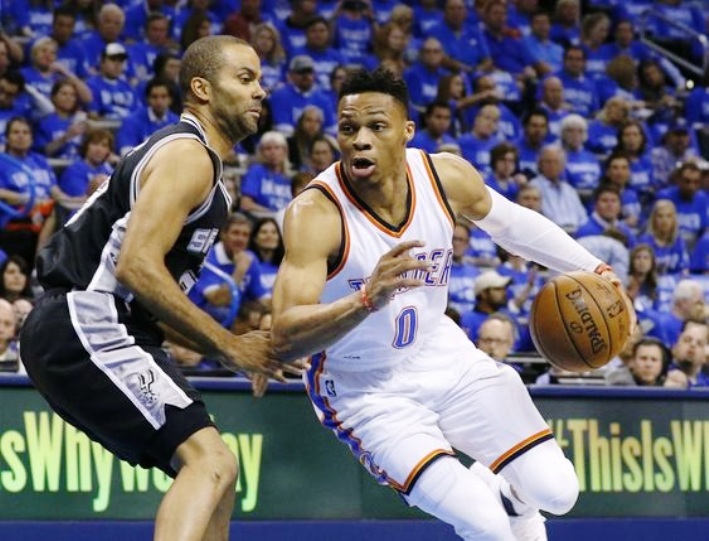 Kevin Durant scored 37 points as the Oklahoma City Thunder completed a 4-2 series victory over the San Antonio Spurs to advance to a Western Conference finals showdown with the Golden State Warriors on Thursday.

Durant left the game to a standing ovation after a superb personal contribution which also included nine rebounds and two assists.

The host Thunder punched their ticket to their fourth Western Conference finals in six years with a 113-99 victory in front of a crowd of 18,200 at Chesapeake Energy Arena.

The finals will be a chance for Oklahoma City to avenge their regular-season record against the Warriors, where they lost all three games.

San Antonio, NBA finals champions as recently as 2014, were always struggling against a powerful Thunder team led by Durant and Russell Westbrook, who finished with 28 points.

“We just came out with great intensity,” said Westbrook, who had two back-to-back strong performances against the Spurs. “We knew how important this game was.”

“They been a great team for years,” he added. “Tonight was a tough game but we came out with the win.”

Oklahoma City showed that when either Durant or Westbrook get in a groove, they are tough to beat and when both get going at the same time, it’s almost impossible to stop them.

“We know what we can do as a team,” Westbrook said. “We are confident in ourselves.”

The Spurs had trailed by as much as 26 points at one stage in the game, but despite narrowing the gap in the fourth quarter, were always struggling to overhaul the deficit.

The Thunder continued their rebounding dominance with a 50-40 advantage. They turned the ball over 12 times, while the Spurs gave the ball away just 10 times. Oklahoma City outshot San Antonio from the floor, 47 percent to 43 percent.

The semi-final exit could conceivably mark the end of the road for at least two of San Antonio’s long-serving veterans, with Tim Duncan, 40 and Manu Ginobili, 38, in the twilight of their NBA careers.

The evergreen Duncan finished with 19 points, while Kawhi Leonard was the top scorer for the Spurs with 22.

Duncan turned 40 last month and hasn’t made it clear whether he plans to return for another season. He has a player option on his contract.

Although Duncan’s minutes were reduced this year, he still came up with some turn back the clock moments and played a big role in helping lead the veteran Spurs squad to their best regular season in franchise history.

Asked in the Spurs’ dressing room what the future holds for him, Duncan said, “I will get to that when I get out of here.”

In order to reach the finals, Westbrook said, they must beat Golden State on their home court — which he believes they can accomplish.

“Very confident we can beat them,” he said. “They are a good team. They are the defending champs. We are going to go there to take care of business and try to move on.”

“It is time to knuckle down.” – Agence France-Presse