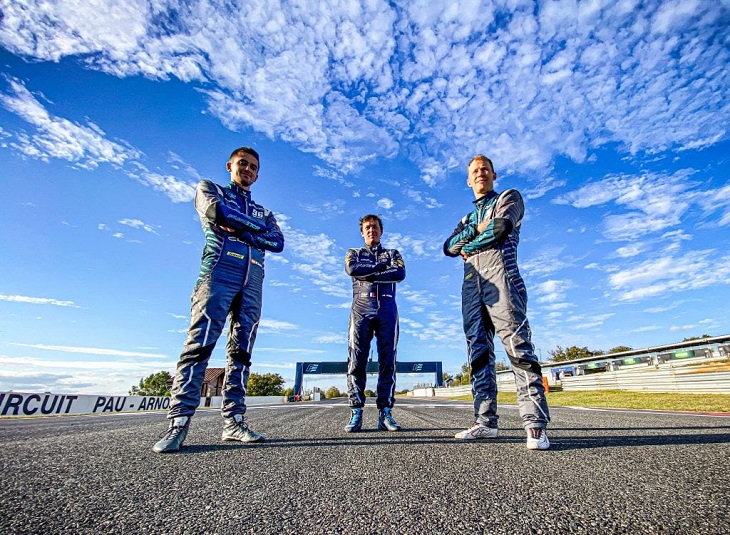 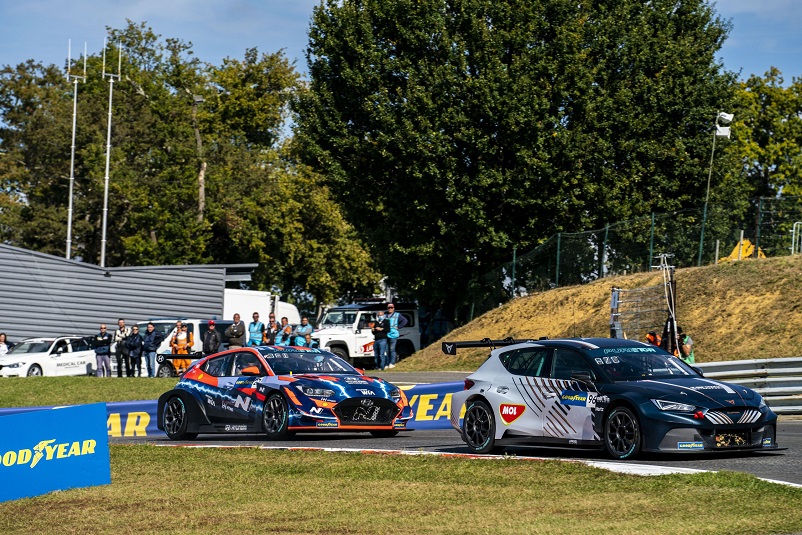 Three of the world’s top racers will battle tooth and nail to be crowned as the winner of the first all-electric, multi-brand touring car series on Sunday after two action-packed days of competition at PURE ETCR Race FR at Pau-Arnos E-Circuit in France.

The weekend so far has been one of CUPRA domination with Ekström winning both of his Battles to top Pool B with a perfect score and then pacing his Time Trial – the flat-out, single-lap blast at peak 500kW (670bhp) power to secure pole position for DHL SuperFinal B.

Azcona – the only one of the title contenders drawn in Pool A – has an identical points total thanks to wins in Rounds 1 and 2, but made a crucial error on his Time Trial lap as he ran through the gravel at Turn 3 and dropped to fifth on the grid as a result.

Vernay – racing in front of his home crowd – was beaten by Ekström in the opening round, but bounced back with victory over Rodrigo Baptista’s Romeo Ferraris-M1RA Giulia ETCR on Saturday morning.

Baptista and Jordi Gené – Ekström CUPRA team-mate – also began the weekend as title contenders, but were eliminated from the fight during the first two rounds; the latter after being defeated by Ekström on Saturday morning.

The spectacular and undulating Pau-Arnos E-Circuit has proved an immense challenge to the PURE ETCR contenders so far; the circuit chosen as the season finale not only for its electric-racing infrastructure, but also for the Pau-Tarbes region’s status as one of the most environmentally-aware in Europe, with several scientific institutions dedicated to sustainable research.

Under spectacular Autumn skies, the world’s top touring car racers put on a fantastic display for the assembled crowd with plenty of door-to-door racing entertaining those present.

While CUPRA’s drivers grabbed the headlines, there was joy for Hyundai as Augusto Farfus – another Round 1 winner after contact with Luca Filippi’s Giulia ETCR – set the fastest time across both Time Trials to secure the TAG Heuer Best Lap Trophy.

There were highlights for Romeo Ferraris-M1RA too as Oli Webb – currently second in the Pool A points – Luca Filippi and Philipp Eng all won Battles across the first two rounds, while CUPRA’s Dániel Nagy impressively qualified second for DHL SuperFinal A.

CUPRA X Zengo Motorsport, Hyundai Motorsport N and Romeo Ferraris-M1RA all head into Sunday with a chance of being crowned the series’ winning Manufacturer, meaning even more celebrations are in store.

Mattias Ekström, CUPRA X Zengo Motorsport, said: “Yesterday we came here on the right foot. We haven’t had to touch the set-up of the car all weekend long. That’s the base you need to be competitive. I really like the car and that also makes it easier to do a good job. Both days have been fun. The Time Trial lap was fun and to be on pole is great. I will drive tomorrow’s race like any race. If Philipp [Eng] or Jean-Karl [Vernay] want to race crazy, I will let them go. I want to make a good start, fire off as much Power-Up as possible and say ‘goodbye’. If they manage to catch me in the end, I’ll say ‘please go ahead’. There; I’ve told you my strategy.”

Jean-Karl Vernay, Hyundai Motorsport N, said: “I had maybe two minutes break between WTCR qualifying and the PURE ETCR Time Trial today, so the preparation isn’t ideal, but the lap was okay. I maybe over-drove a bit in the last sector, but I wasn’t the only one. I can be happy. I think tomorrow’s going to be fun, so we have to see [what’s possible]. We are all happy and working together and super-happy that we get the best laptime. In Budapest we were a long way away from the pace of the CUPRA and also the Giulia. So to come here and have my team-mate Augusto [Farfus] setting the best laptime in the Time Trial was a really good result and a nice reward for everyone who’s worked super-hard. I don’t wish anything bad to happen to Mattias, but anything can happen in motorsport, so let’s see what happens tomorrow. The first target is to be second in the championship, but I’ll definitely go for the win.”

Mikel Azcona, CUPRA X Zengo Motorsport, said: “I made a mistake in the Time Trial early in the lap, so pushed extra hard in the last two sectors, but it was impossible to make up the lost time. I didn’t lose any points though. I feel quite good for the SuperFinal and my car is working very good, so I have big confidence. With the Power-Up I think we can easily change the position here, but we still have to work hard tonight to prepare. The fifth position tomorrow is better than fourth even because being in the middle is better and more grippy. I’m really confident. We have to work hard to maximise the power-up. I think maybe I’ll have to use a lot on the first lap and then be smart with it for the rest of the battle. The objective is to have the car in one piece for Mattias, but it should be good.”