Home Badminton End of the road for Malaysians in Gimcheon 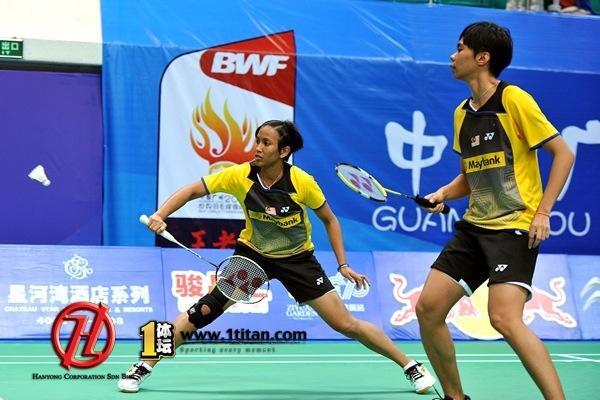 The surviving Malaysian pairs in the men’s and women’s doubles in the Asian Badminton Championships failed to get past their quarter-finals at the Gimcheon Indoor Stadium in Gimcheon, South Korea on Friday.

Low Juan Shen-Heg Nelson Wei Keat, who marched into the men’s doubles quarter-finals without lifting their racquets after Taiwan’s Tsai Chia Hsin-Lee Sheng Mu conceded a walkover in their second round tie, fell 18-21, 13-21 to China’s Shi Longfei-Chen Zhuofu in only 33 minutes.

In the women’s doubles Anscelly Amelia Alicia-Soong Fie Cho failed to get their revenge against India’s Ashwini Ponnappa-Jwala Gutta and made their exit with a 12-21, 12-21 defeat in 40 minutes. The Malaysians had also lost to the Indian pair in the Indian Open Grand Prix Gold.

Ashwini-Jwala will meet China’s Luo Ying-Luo Yu in the semifinals.

Olympic and World champion Lin Dan, who is unseeded in the Asian meet, continued his relentless march in Gimcheon when he gave another master class display to book his place in the men’s singles semi-final with comparative ease.

The Chinese ace whipped Hong Kong’s China-born Wei Nan 21-10, 21-7 in 34 minutes to stay on course for his second title in two weeks after winning the China Masters GP Gold. He will now play teammate Liu Kai for a place in the final. Liu Kai stopped India’s R.M.V. Gurusaidutt in three sets 22-24, 21-9, 21-13 in the quarter-finals.

India’s up and coming women shuttler PV Sindhu continued her winning ways to reach the semi-finals with a 14-21, 21-13, 21-10 win over Thailand’s Busanan Ongbumrungpan and will face top seed Wang Shixian of China in the semifinals. Shixian beat Korea’s Lee Jang Mi 21-16, 21-19 to advance to the last four.