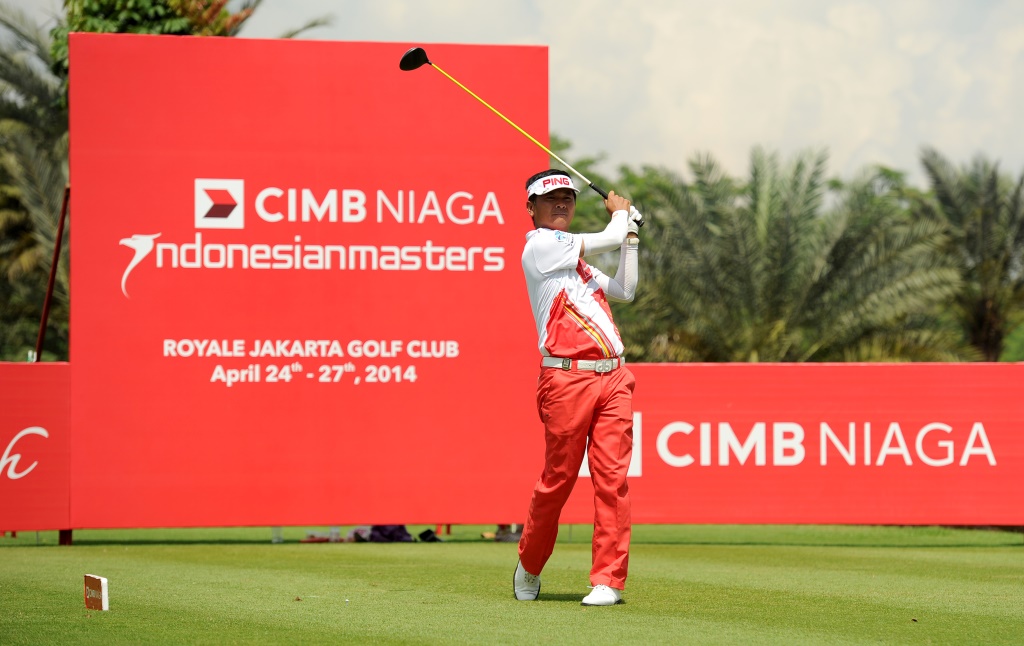 Chinese Taipei’s Lin Wen-tang took advantage of a well-rested break and fired a sparkling eight-under-par 64 to take the second round clubhouse lead at the weather disrupted US$750,000 CIMB Niaga Indonesian Masters on Friday.

Lin, a six-time Asian Tour winner, is clearly the man to catch when play resumes on Saturday morning as he marked his card with nine birdies against one lone bogey to take his place atop the leaderboard with his two-day total of 10-under-par 134.

Inclement weather brought a halt to the day’s action at 5pm (local time) and 19 players will now have to return to Royale Jakarta Golf Club to resume their round at 6.45am (local time) tomorrow.

Australian rookie Cameron Smith continued to impress in what is only his second start on the Asian Tour by carding a 67 to trail Lin by one while a grieving Nicholas Fung of Malaysia held back his emotions and battled to a 69 to share third place with Thailand’s Chapchai Nirat.

Lin was forced to withdraw from an event in Malaysia last week because of heat and fatigue.

But having taken a well-rested break, the 40-year-old came out with all guns blazing in the morning.

“I wasn’t feeling very well coming to this week. I had to withdraw from the tournament in Malaysia last week because the weather was just too hot! I spent two days resting in the hotel. I have never slept so much before it was quite scary. I guess my body really needed some rest,” said Lin.

Taking advantage of the cooler conditions in the morning, Lin reached the turn with an outward 33.

He then played like a man possessed as he ran off two birdies in three holes before surging ahead with three successive birdies from the seventh hole.

“I don’t really like playing in the hot weather. I’ve to walk with an umbrella and use ice to cool my face all the time. But I guess I had an advantage today because the weather was cooler when I started in the morning. I putted better than yesterday too. My drive has been pretty good the last two rounds as well,” said Lin.

After missing the cut in his debut event in the Philippines in March, Smith is relishing the prospect of playing in the weekend rounds at the CIMB Niaga Indonesian Masters.

The Asian Tour graduate, who finished tied-18th in Qualifying School earlier this year, traded eight birdies against three bogeys to put himself into contention for his maiden win.

“Today was a better start for me as I got the ball rolling pretty quickly early. I got a couple of bogeys which was disappointing but hopefully I can wipe them off the cards over the weekend,” said Smith.

“My life has changed a little bit since I turned professional. There’s a little bit more travel, more work into golf which is nice but overall it’s not a bad job that I have,” added the Australian.

Despite carrying a heavy heart with the passing of his grandmother, Fung continued his chase for his career breakthrough on the region’s premier Tour.

The Malaysian, who started on the front-nine, simply could not find those decisive birdie putts as he made 11 straight pars.

“I think I lost focus in my front nine. Then my caddy told me to put aside the unhappiness of my grandma’s passing and concentrate on my game,” said Fung.

A superb eagle-three on 12 hauled Fung back into the mix before a birdie on 16 ensured he would head into the weekend rounds in a favourable position on the leaderboard.

“I will try and win this week just for my grandma. I’m very happy with my 69 today and still seeing my name on the leaderboard,” said the Malaysian.

Chapchai believes he is close to rediscovering his winning form as he fired four birdies, one eagle and two bogeys to put himself in a good position of ending his five-year title drought at the CIMB Niaga Indonesian Masters.

The three-time Asian Tour winner’s last victory on the region’s premier Tour came in 2009 where he posted a stunning 32-under-par 256 winning total in India to set a 72-hole world scoring record.

“I feel I’ve got a good chance to do well this week. I’ve been hitting the ball really good and I know that I just got to stay patient and not get too distracted to get that win.

It has been a long time and it will really be nice if I can land another victory.  But I don’t want to think too far just yet as I only want to put myself into contention on Sunday,” said Chapchai.

“Scores after round 2 of the CIMB NIAGA Indonesian Masters being played at the par 72, 7340 Yards Royale Jakarta GC course (a- denotes amateur):”