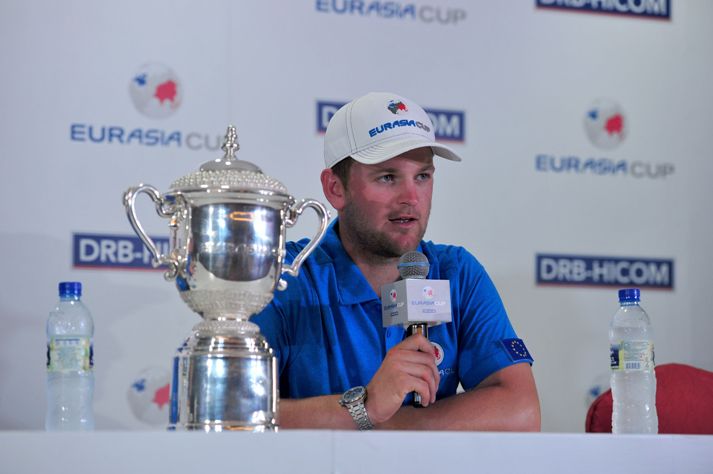 Danny Willett, Andy Sullivan and Bernd Wiesberger believe the strong camaraderie in Team Europe will give them an edge at the EurAsia Cup presented by DRB-HICOM which starts on Friday.

Willett, Sullivan and Wiesberger, who have each won three European Tour titles each, are confident Europe, under the captaincy of Darren Clarke, will rise and defeat Team Asia at Glenmarie Golf and Country Club.

World number 34 Sullivan, a three-time winner last season, hailed the bond that exists between all members of Team Europe. The 29-year-old will make his debut at the EurAsia Cup but holds good memories in team match-play event after featuring for Great Britain and Ireland in their victory over the USA in the 2011 Walker Cup while he was an amateur.

“We were having a good laugh out there … got a lot of camaraderie on the team. Again, like Darren was saying, it’s a young team and a bit of an experienced team, but again at the same time, it’s a good team,” said the 29-year-old Sullivan.

After winning on the Asian Tour in Indonesia in 2013 and finishing runner-up to Anirban Lahiri of India at the 2015 Malaysian Open, Wiesberger believes Team Asia, led by captain Jeev Milkha Singh of India, will be a tough team to beat.

“I think we’re facing a really strong opponent. But I think the main advantage we can bring to this week is we play with each other, week-in and week-out, even though we compete against each other, we know each other’s game pretty well,” he said.

“So I think we have a good set up of teams and an idea to go into this match the Asian Team, which looks strong on paper, are spread out through different tours, so maybe don’t get to play with each other as much,” added Wiesberger.

Willett, runner-up on the European Tour’s Race to Dubai last year, will be eager to impress Clarke, who is also the Ryder Cup Captain.

“The Asian Team is pretty good. I think they have got a good mixture of young and old. The last time, I think they halved. A lot of the players are from the Asian Tour, maybe some we don’t bump into, but they have a very good team,” said Willett.

“In Asia with the heat, obviously benefits them guys a little bit more. But yeah, I think you’re going to see a pretty good contest,” he added.