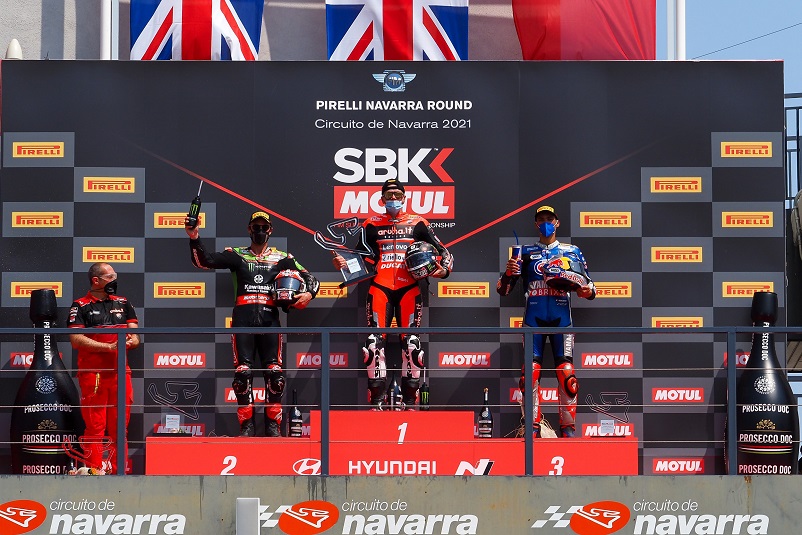 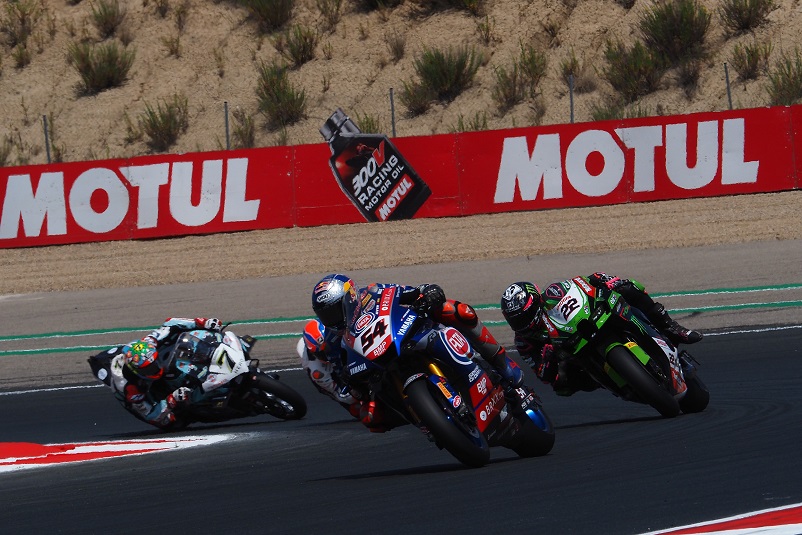 The Circuito de Navarra hosted its first MOTUL FIM Superbike World Championship for the Pirelli Navarra Round with Scott Redding (Aruba.it Racing – Ducati) claiming his second consecutive WorldSBK win in a row and the ninth of his career after a commanding victory as he closed the gap to title rival Jonathan Rea (Kawasaki Racing Team WorldSBK) to 45 points in the Championship standings.

FIGHTING AT THE START

As the lights went out, Redding got the jump over polesitter Rea into Turn 1 but Redding’s advantage did not last long as Rea fought back at the Turn 6-7 section of the circuit to re-take the lead of the race, also withstanding an early challenge from rookie Andrea Locatelli (Pata Yamaha with Brixx WorldSBK) on the opening lap.

At the start of Lap 6, Redding got a better run out of the Turn 15 right-hand hairpin to make a move on Rea into the incredibly fast right-hander of Turn 1, getting the move completed just before they turned in for the opening turn of the lap, before pulling out a gap of over a second on Rea over the next handful of laps.

Toprak Razgatlioglu (Pata Yamaha with Brixx WorldSBK) was a rider making moves from the start as he battled from eighth place to fourth on the opening lap and found himself behind teammate Locatelli, but spent numerous lap behind him before he was able to pass his rookie teammate on Lap 7 after he ran wide.

BATTLES UP AND DOWN THE GRID

Rea was running in second place but survived two errors into Turn 9 into just a handful of laps as he first had a big moment before running wide a on Lap 15, losing a total of around two seconds to Redding but did not lose out to Razgatlioglu in either the race or the Championship battle; Rea extending his lead over Razgatlioglu to seven points.

There were plenty of battles up and down the field as riders searched for the best possible position, with Alex Lowes (Kawasaki Racing Team WorldSBK) coming home in fifth place behind Redding, Rea, Razgatlioglu and Locatelli, with Tom Sykes (BMW Motorrad WorldSBK Team) leading teammate Michael van der Mark in sixth and the Dutchman in seventh.

Axel Bassani (Motocorsa Racing) and Garrett Gerloff (GRT Yamaha WorldSBK Team) had a battle in the latter stages of the race over eighth place, with American star Gerloff unable to make a pass on the youngest rider on the WorldSBK grid, Bassani holding on to take eighth place with Gerloff in ninth. Michael Ruben Rinaldi (Aruba.it Racing – Ducati) completed the top ten after a challenging Race 1, the Italian involved in battles in the midfield throughout the race.

Rookie Kohta Nozane (GRT Yamaha WorldSBK Team) claimed 11th place after a strong race battling throughout the field ahead of Tito Rabat (Barni Racing Team) in 12th; Rabat involved in a long battle with Leon Haslam (Team HRC) with the British rider coming home in 13th place. Jonas Folger (Bonovo MGM Action) scored his first points since Race 2 at MotorLand Aragon with 14th place, with Christophe Ponsson (Gil Motor Sport – Yamaha) completing the points. Ponsson found himself on the ground at Turn 3 after an incident involving Leandro Mercado (MIE Racing Honda Team) on Lap 3 at Turn 3 but was able to re-mount his Yamaha machine to secure one point in Race 1; Mercado retired from the race.

Three riders finished the race but were unable to claim a points finish in Race 1 at Navarra with Suzuki wildcard Naomichi Uramoto (JEG Racing) finishing in 16th place, just two tenths behind Ponsson and narrowly missing out on points. Loris Cresson (OUTDO TPR Team Pedercini Racing) had been running in the points-paying positions during the 23-lap race but fell down the order to finish 17th, with teammate Jayson Uribe in 18th; the American having a crash on Lap 13 at Turn 13 but able to recover to finish the race.

Lucas Mahias (Kawasaki Puccetti Racing) had an incident on his own at Turn 11. Chaz Davies (Team GoEleven) retired from the race after he crashed on his own at Turn 9 while, at the same time, Alvaro Bautista (Team HRC) had a crash at Turn 12 but was able to re-join before bringing his machine back to the pits.