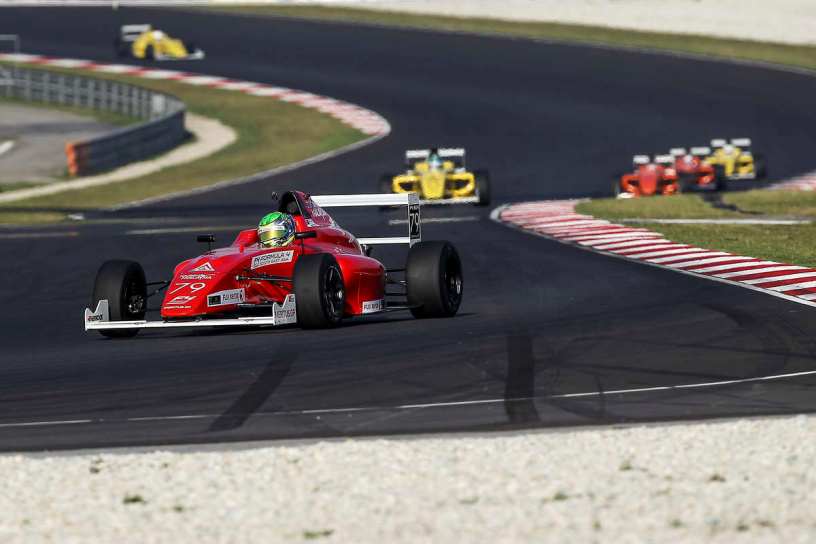 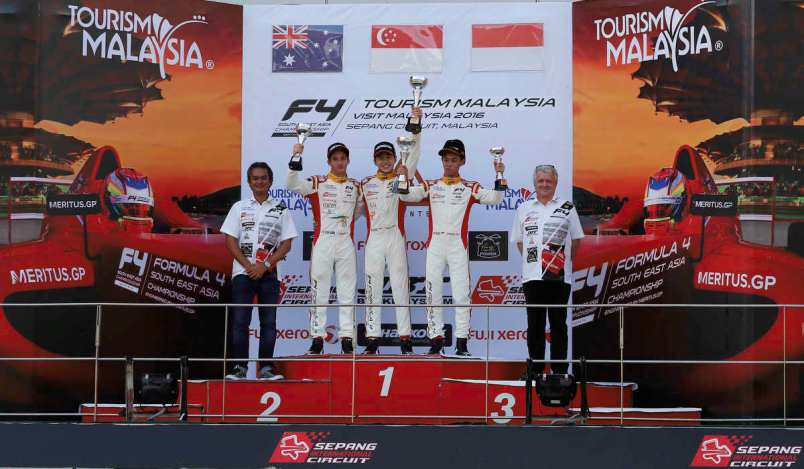 The opening event of the inaugural Formula 4 South East Asia Championship (F4SEA) – certified by FIA drew to a successful conclusion on Sunday with the young drivers competing in the final three races of the six scheduled.

The second race of the day – the fifth out of the six scheduled, saw Danial Frost return to his winning ways, finishing ahead of Kahia. In third place was Malaysian Nazim Azman, with the Rookie win going to Presley Martono (INA, Car #32) of Indonesia. With the grids reversed for the final race of the opening event, India’s Akash Gowda (IND, Car #33) had the honours of starting from pole-position.

The closely-fought and exciting affair produced some spectacular racing, with Danial emerging victorious in a sprint to the finish just ahead of championship rival Love with Martono in third place, which was also the Indonesian’s first podium finish in the race and third Rookie win of the weekend.

With this result, Danial leads the championship race with 127 points with Jordan Love in the silver medal position with his total points haul of 108. Rounding off the Top 3 is Faine Kahia with a total of 96 points. Danial’s performance also saw the young Singaporean walk away from the weekend with the Fuji Xerox Star Driver Award for the first event of the championship.

After suffering a mechanical failure in the previous race that prevented Love from claiming a third race victory, Jordan Love was back to his usual form with a great start for Race 4 early on Sunday morning. Pulling out an early lead through to the end of the 10-lap race, Love had left the rest of the field in his wake. The bulk of the action was thus mostly concentrated on the fight for the final two positions on the podium between Nazim Azman (MAS, Car #17), who had started on the front row and Faine Kahia.

Meanwhile, a mistake by Race 3 winner, Danial Frost had seen the youngster drop down the order, though the youngster made the most of a safety car period to make his way back up the order, enough to start challenging by the second lap. Before long it had become a 3-way fight for the final podium spots between Nazim, Kahia, Akash Gowda (IND, Car #33) and Danial. Lapping consistently faster than Nazim, it did not take Kahia long to edge past the Malaysian, leaving Nazim and Danial to battle for the final spot on the podium.

Unfortunately, a drive-through penalty for an on-track racing incident involving Nazim effectively removed him from the fight, leaving Danial to inherit the position through to the chequered flag. A commendable fifth place finish for Muhammad Nalwalla also saw the young Indian on the podium to collect his second Rookie winner’s trophy of the weekend.

With Love, Danial and Kahia again locking out the top three positions on the grid for the midday Race 5, proceedings did not go as scripted particularly for Love. Despite getting ahead and successfully defending his position from Danial, the Aussie ace was given a drive-through penalty for jumping the start. This allowed Danial to take the lead of the race, ahead of Kahia and Nazim, with the trio evenly spread out through most of the race.

Towards the tail end of the race, Nazim did come under some pressure from rookie Presley Martono (INA, Car #32). With fresher tyres, the Indonesian had managed to close to within a second of Nazim, but was unable to pass.

With a comfortable win for Danial – his second of the weekend, Kahia finished second ahead of Nazim, who managed to defend his third place finish for his first visit to the podium. Martono’s impressive form saw the youngster finish fourth and claiming another Rookie win.

With the grid positions for the final race of the weekend reversed for the top five finishers from the previous race, sitting in pole position was India’s Akash Gowda with Martono lined up alongside him from P2. Following a clean start by the drivers, the Indian kept his cool as he fought to defend the lead in what turned into a five-way fight on the opening lap of the 8-lap race.

The young Indian did however find himself in the clutches of a charging Danial who eventually wrestled the lead off Gowda midway through the second lap. Meanwhile, a determined drive from Love saw the Aussie recover significant ground from his seventh grid position start to eventually find himself in contention by the third lap, pressuring first Kahia, then Martono. A supreme defensive effort by the Indonesian driver forced Love to work hard to gain the position, which he successfully did with three laps to go.

After putting down a series of fastest laps, the Aussie was able to catch race leader Danial, as he began piling on the pressure for the lead of the final race of the weekend. The thrilling affair ended up being a sprint to the finish with the young Singaporean holding his nerve as he emerged victorious over Love, who had to settle for second place with Martono in third for his maiden podium finish in addition to collecting another Rookie win. The closely fought race was the closest finish of all six races with the top three separated by just five-tenths of a second, which proved to be a fitting conclusion to the first event.

“What an amazing weekend overall to come away with three race wins, and to come away with the championship lead and the Fuji Xerox Star Driver of the event is something I did not really expect. Thank you to everyone, my family, the team, coaches and engineers! In Race 3, I came in wanting to challenge Jordan but could not quite manage the pace but I was able to build on my race craft and improve my overtaking maneuvers. In Race 5, I tried to challenge Jordan at the start but then he had a penalty, which allowed me to take the lead of the race, which I managed to hold on to the end. The final race was incredible, especially as I had to start from 5th on the grid. So my strategy was to make sure I had a good start and make up as much ground as I could. I am glad that I managed to take the lead and was involved in a good fight with Jordan at the end, but I managed to hold on for the win.”

“After suffering a terrible result due to a mechanical issue in Saturday’s race, I am really happy with this result with another win in Race 4! There were a few things I struggled with, which did make it a bit challenging for me. The pace was really good in the race, perhaps a factor from yesterday’s DNF, that the race was held quite early today and the new tyres, so it was cooler than usual making the track quite quick. Race 5 was hard especially as I had a drive through penalty, which meant that I had to make up a lot of ground. The final race was quite challenging, as I had to start from 7th on the grid. That meant that I lost quite a lot of time while trying to make my way up. By the time I was able to catch Presley and Danial, they both gave me a good fight, but I am a little bit disappointed with the overall outcome of the weekend. Nevertheless, I am happy with what I was able to achieve and would like to thank everyone involved.”

“Overall, I am quite happy with my performance this weekend, as I was quite consistent throughout all the races as I managed to collect five podium finishes out of the six that was held. That final race was quite challenging! To come away from the weekend with third overall, is a great motivation for me to continue to push. There were quite a few interesting battles in all the races today but I also know that there are a few areas that I need to work on. But what a good ending to the opening season of the Formula 4 South East Asia Championship.”

“Unfortunately, I had to start from the back of the grid for Race 5 as I did not finish the previous race. But, I had a really good start and managed to climb up to fifth. I managed to catch Nazim at one point, but when I did get right behind him, I missed a gear and lost the opportunity to challenge Nazim. Overall, I am happy with my performance this time. I had a much better race in the final race and overall, I am happy that it ended on a high after struggling at the start of the event. One of the things that I was really happy about was that my pace was starting to match Danial. I am not quite as close to Jordan, who was simply too fast. But, there are plenty of positives to take away from this weekend.”

“This was my first podium of the weekend in Race 5 and it’s such a nice feeling. I started fourth on the grid, and spent most of the time behind Faine. But then when Jordan went in for his drive-through, I stayed in third. Towards the end, Presley had caught up with me, but he had made a few mistakes, which allowed me to open up a gap to him. Faine also had a few moments, but by the time I had closed the gap to Faine, the race was over. Overall though, I am really happy.”

“Really happy that I was able to come back to the podium for my second Rookie winner’s trophy in Race 4, but I still have to work on my pace, as there is still a lot of ground to make up. I did lose a couple of positions during the safety car period in the race, and there are quite a few areas I need to work on. Overall, I am really happy and there are a lot of positives as well as areas for me to work on for the future.”

“It was a truly fantastic start to the Formula 4 South East Asia Championship, which was a success. The whole operation ran smoothly without any hitches, considering that this was the first event. The drivers showed considerable progress and were extremely professional in every respect. Congratulations to Danial Frost for claiming the Fuji Xerox Star Driver Award for Event 1 and on his stellar performance overall. This sets us up well for the coming event next month.”

”It was a fantastic weekend, with considerable pressure on us, but we managed to pull it off. We had six amazing races, which ended on a high with a thrilling final race today. The racing has been very competitive and tough, for instance to have the top three finishers within five-tenths says a lot about the level of competition and definitely bodes well for the coming events.”

The next event in the 2016 Formula 4 South East Asia Championship calendar will take place from 2 to 4 September at the Sepang International Circuit.