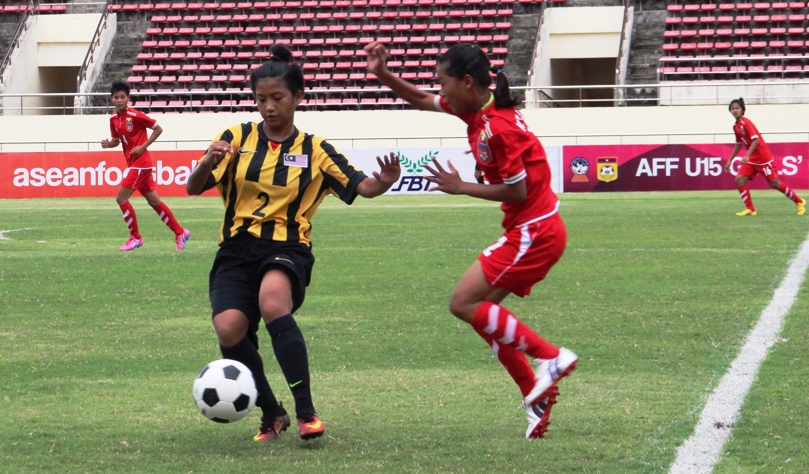 A hat-trick from striker Myat Noe Khin puts Myanmar in the semi-finals of the AFF Under-15 Girls’ Championship 2017 when they blasted Malaysia 4-2 in their final Group A fixture this afternoon at the KM16 National Stadium.

In the match which Myanmar needed to win for them to make the next round, there was no doubting the quality on their side as against a Malaysian team already out of contention.

“We were confident of a place in the semi-finals and today, we played quite well,” said Myanmar head coach Nu Nu Khine Win.

After stamping their authority right from the onset, it took Myanmar or more specifically Noe Khin just four minutes to get on the score sheet when she beat the offside trap to blast past Malaysian keeper Siti Noor Maslinah Asiruddin.

To the credit of the Malaysian girls, they did not give up one bit as they still put in the hard work to give a better account of themselves as they fought for every ball.

But their lack of experience was telling and in the 21st minute, the Malaysians fell further behind with Thiri Kyaw latching on to a cross from Pont Pont Pyae Maung.

Two goals down, Malaysia then replied with their first goal in the 31st minute with Nur Syafinaz Abdul Rajak pouncing on a rebound after the earlier attempt from Ayuna Anjani Lamsin was blocked.

However, Myanmar still had plenty of gas in the tank and just three minutes later they nailed their third goal of the game with an individual effort from Noe Khin.

Malaysia came back stronger into the second half and seven minutes in, Henrietta Justine unleashed an exquisite shot from 20metres out to beat Myanmar custodian Htet Eindra Lin to the top left corner.

Growing in confidence, Malaysia went into the attack but Myanmar were just too steady at the back as they closed ranks before Noe Khin fired in the fourth goal of the game in the 57th minute from the edge of the Malaysian box.

With the win, Myanmar will now take on the Philippines in the second game of the semi-finals in two days. The first semi-final will see Thailand playing Cambodia. 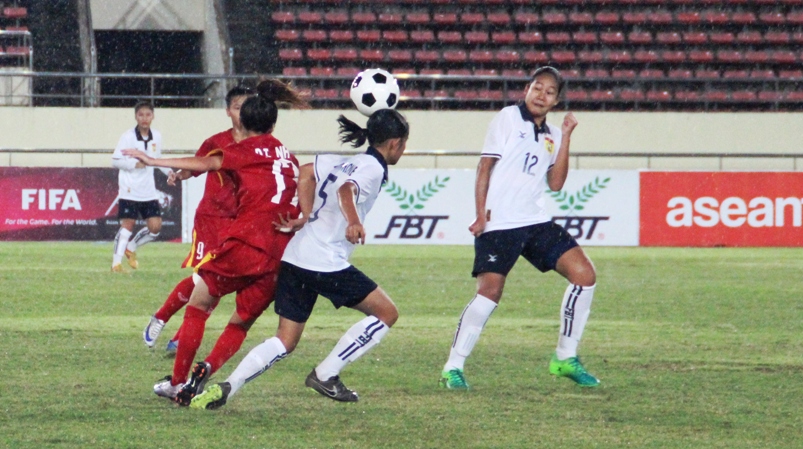 In the meantime, Vietnam came in third in the competition this year when they beat hosts Laos 2-0 in the final fixture in Group A.

With any hopes of Laos making the cut to the next round already dashed earlier following Myanmar’s win over Malaysia, the hosts seemed to be a little out of it against a Vietnam side eager to win back some measure of respect.

The goals for Vietnam were scored by captain Nguyen Thi Tu Anh in the eighth minute and then Tran Thi Thu Xuan in the 73rd minute.