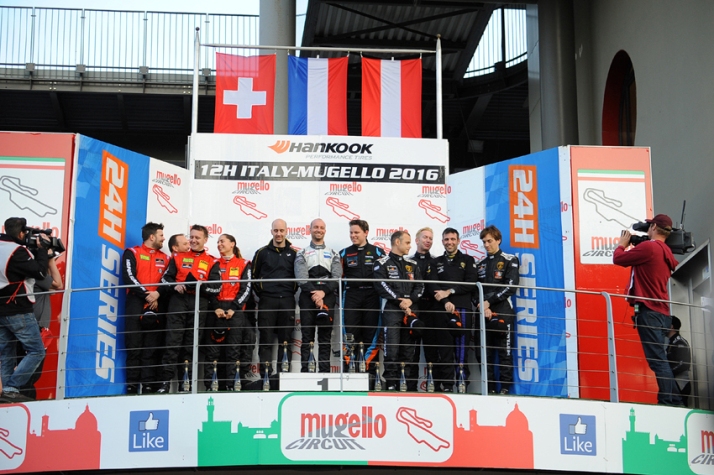 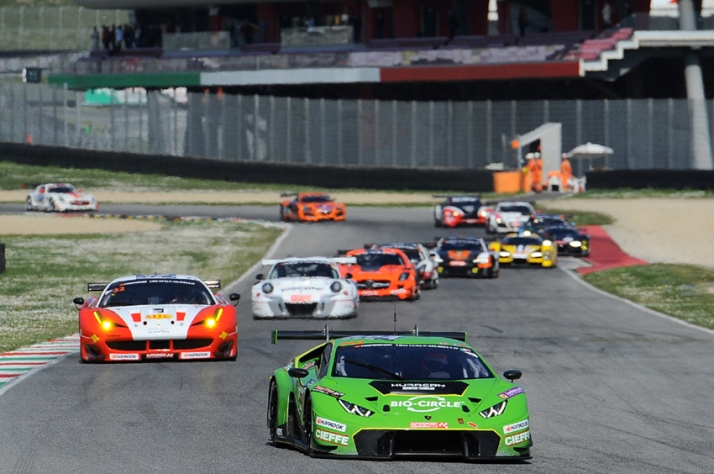 “We are really happy that we still made it,” commented team principal Gottfried Grasser. “With everything that happened, it was a really hard race. Our drivers really gave it all!.”

Christian Engelhardt had claimed pole position for the Grasser team. Start driver Rolf Ineichen managed to keep the lead, but not for too long: “Already after the first 20 laps, we were spun  around by a Ferrari”, said Grasser.

But it should become even worse: “During the second pit stop our fuel tank suddenly burst up in flames due to a broken fuel valve and our refueling guy,  Benny, got hurt. Of course this overshadowed our whole race weekend.”

Furthermore the incident meant that the team dropped back to ninth position at the end of the first day, after the first four hour leg of the the race.

But after the restart at the second day things turned to the better for the four drivers of the Grasser Lamborghini. Their speed was perfectly okay from the beginning and at the same time some other cars started to get hit by trouble, too.

When the long time leading Audi number 14 stopped with gearbox problems on track with only a bit more than one hour to go, it not only caused a spectacular crash with two following cars. It also meant that third position for the Grasser car was secure, “even if we also had to deal with a puncture in between.”

It was a very special success for everybody in the team due to the  events the day before: “The thoughts about the refueling accident were always with us in the car”, admitted Marc Ineichen. “It was really a thriller whether we would make it to the podium or not. But we did a really good job, even as luck was not really on our side this weekend.”

His brother Rolf Ineichen was happy about the impressive fighting spirit of the whole team: “What a chaotic race! I had a very good start, but after one third of my stint  bad luck started to hit us. After the first four hours we were not where we wanted to be. The second day, we managed to give it all, we fought for the podium – and in the end  we got there! Third place was only possible due to great teamwork and a perfect strategy.”

Christian Engelhardt war slightly proud of having managed to „claim pole position and than even finishing on the podium even with all the difficult circumstances“ in his first start for Grasser Racing.

Adrian Amsturz reflected thoughtfully: “We had so many ups and downs in this race. Honestly I would have preferred to have come fourth with Benny being here with us.”  In this point everybody, drivers and team principal, agreed: “This trophy is for Benny. Our thoughts and best wishes are with him. We all hope he will get well again very soon.”