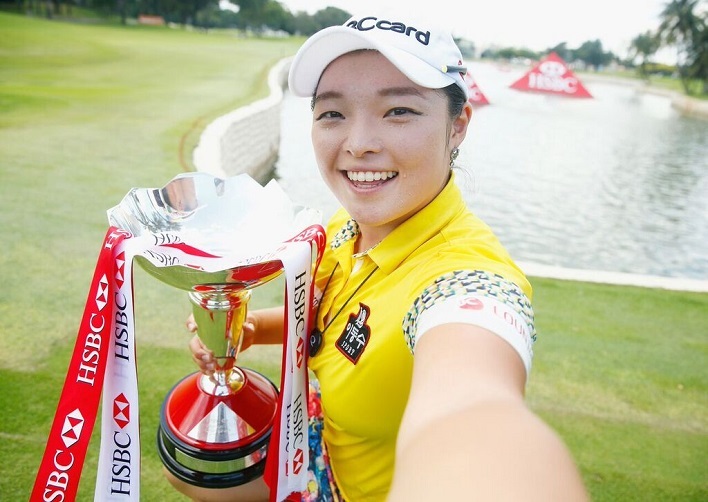 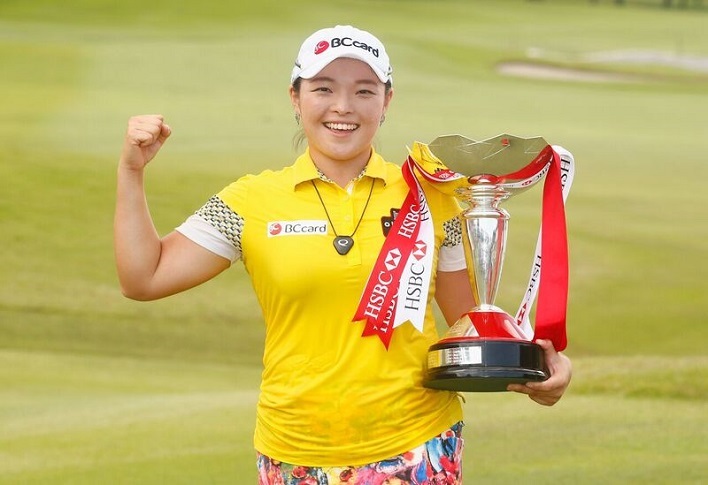 Ha Na Jang has won the HSBC Women’s Champions with a commanding four-shot win over Thailand’s Pornanong Phatlum to become the third South Korean after Jiyai Shin (2009) and Inbee Park (2015) to hold aloft the prestigious trophy.

The front runner since day two, the World No. 10 saved her best until last, carding a 7-under par 65 in round four, to finish with a total of 269 at 19-under. Jang began the day with a slender one-shot lead over Phatlum but gradually increased the margin with some superb putts.

The nine-time tour champion underlined why she has been the form player all week by eagling the final hole of the tournament, to rapturous applause of the watching fans. One of the original socalled ‘Seoul Sisters’, she celebrated in true style, with an Beyoncé-inspired jig on the 18th green.

The champion, who takes home a winner’s cheque of US$225,000, said: “It’s amazing right now because the last eagle was very fun, very enjoyable, and exciting in my mind.

Two wins (this year) right now, (I am) very happy. (The difference this year is) just be patient every day and practice a little more, and very hard practice.”

Thai star Phatlum completed her campaign with a bogey-free round four-under 68 to finish with a total of 15-under 273. Despite 11 career wins, a first LPGA Tour victory continues to prove elusive for the 26 year-old, but she believes she can take a lot of positives from her efforts this week.

She commented: “I played good (this week), a good start to the year, so that’s made me confident. Everything is getting better and better. I now have more experience, and I have new equipment so I can play with more distance. Here (at HSBC Women’s Champions), it was my best performance this week.”

Amy Yang finished in third place at 11-under par with Candie Kung, Na Yeon Choi, Chella Choi and Mirim Lee tied in fourth place, one shot further back at 10-under par.

The lone Singaporean in the field, Koh Sock Hwee, completed the week at 10-over in tied-59th place.

For the first time in its history, the HSBC Women’s Champions became a four-day festival offering the best in golf, music, and food. British pop band Take That performed for the first time in Singapore in over 20 years on Saturday night, while Electronic Dance Music DJ Jack Novak flew in from the US to spin for fans.

Celebrity chef Monica Galetti headlined the culinary element offering visitors to the HSBC Women’s Champions the chance to be amongst the first in Asia to sample her critically acclaimed dishes.

Giles Morgan, Global Head of Sponsorship & Events at HSBC, said: “Congratulations to Ha Na Jang on her victory at HSBC Women’s Champions 2016, joining some of the greatest players of all time who have won the tournament over the past eight years. It’s our ambition to open up the game of golf to new audiences. Great golf personalities such as Ha Na’s are fundamental to us doing that and so too are the new experiences we have brought to Singapore for the fans, including the return of Take That.

Our vision was to create one of the leading golf events in the world. If you look at the leaderboard, with the top 8 players coming from the region and today’s winner, we have done that. This is undoubtedly Asia’s Major.”

Sentosa Golf Club President, Low Teo Ping said: “Sentosa Golf Club is proud to have hosted the HSBC Women’s Champions for the past three years, and we are delighted to witness Ha Na Jang’s emphatic victory today on the Serapong course. We always enjoy hosting these talented ladies and look forward to welcoming them back next year. We would like to thank HSBC, the Singapore Tourism Board as well as all the other sponsors, partners, staff and volunteers for their continuous support of this prestigious event.”

Guy Kinnings, Global Head of Golf at IMG, the tournament organiser, added: “Many congratulations to Ha Na Jang in winning her first HSBC Women’s Champions title. Along with this great champion, we have been delighted to see how all the innovative ideas HSBC have incorporated, such as the music and gastronomy components, have captured the imagination of the fans. Our congratulations go to HSBC on a fantastic tournament and our thanks to both the Singapore Tourism Board for their all-important support and to Sentosa Golf Club for providing such a perfect stage. We look forward to returning next year to celebrate the 10th anniversary of the HSBC Women’s Champions.”

For more information on the HSBC Women’s Champions 2016, visit the tournament website at http://www.hsbcgolf.com/womens or official Facebook page: www.facebook.com/hsbcwomenschampions