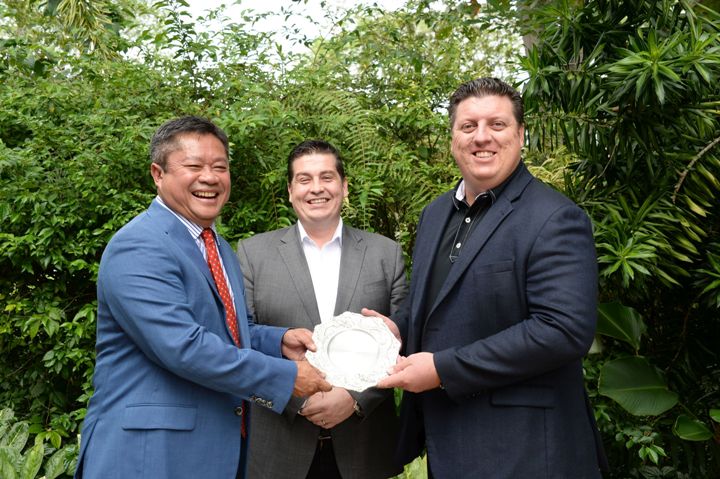 Few events can lay claim to creating such an impact in their first year as the Ho Tram Open, and the success of Vietnam’s richest sporting event has today been recognised by the Asian Tour.

Members of the Asian Tour vote annually on their top performers through the season, and it was the Ho Tram Open which proved to be the standout event amongst some of the world’s best golfers.

“We enjoy such a great roster of events on the Asian Tour, but what we experienced at Ho Tram was exceptional,” commented India’s Himmat Rai, who was part of a four-man play-off ultimately won by Sergio Garcia.

Asian Tour Commissioner Kyi Hla Han added: “Billing an event as ‘Asia’s Grandest Stage’ immediately sets a high expectation, but from the moment we touched down to the moment we left, the hospitality and service were off the charts, leaving us all excited about returning for the next event.”

The Ho Tram Strip is an emerging destination on Vietnam’s stunning south-east coast. The beachfront property is home to a 541 room five-Star luxury hotel, The Grand, which is embarking on its second phase, adding another hotel tower and luxury condo development.

The Bluffs golf course, recently voted ‘The World’s Best New Golf Course’ by the World Golf Awards and ranked 74th in Golf Digest’s ‘World’s 100 Greatest Courses’, sits on unspoilt dunes next to the nation’s East Sea, and has recently seen the addition of The Gallery Villas, a state-of-the-art real-estate complex, carefully placed throughout the golf course.

“This award is the icing on the cake for us,” commented Ben Styles, Vice-President Golf & Residential. “The Ho Tram Open is an advert for all stakeholders within this exciting new destination, both on a local and national level. Vietnam has ambition to grow its golfing prowess and we feel we have played our part in increasing awareness, sparking interest with the global golf community, who will consider Vietnam and Ho Tram a must visit destination.”

The event was promoted and staged by a unique team of golf specialists, Performance54 and world’s leading management group, Troon Golf, providing the pathway to deliver the innovative vision from the ownership group, Asian Coast Development Ltd. ‘Where-Golf-Meets-Entertainment’ became one of the events leading themes and with black-tie gala dinners, concerts and a unique fight night, it certainly lived up to its billing.

“Golf has the ability to shape a destinations economic profile,” commented Jed Moore, Managing Director, Performance54. “When you are given license to create and develop unique initiatives, you can drive far stronger returns with more immediate effect. The leadership from Asian Coast Development Ltd gave us the freedom to do something different and lay the foundations for the destinations future success. This award gives us great confidence for what was achieved and the future of the event.”

A thrilling four-man playoff provided the most dramatic of climaxes, pitting the wits of global star Sergio Garcia, against Thaworn Wiratchant, one of the Asian Tour Godfathers, India’s Himmat Rai and Lin Wen-Tan from Taipei, who had entertained crowds all week with his colourful on and off-course display. Ultimately, it was Garcia who held his nerve to claim the title under the severest of pressure.

“The Ho Tram Open was one of the real success stories for me personally and for golf in general,” commented Sergio Garcia. “To bring together such a great field, at such a great resort and create a weeks’ worth of world-class entertainment certainly made it a unique week for the players.”

The world’s media, whose experience of world golf events is matched only by the players, were also rich in praise with what was achieved.

“This was a wonderful advert not only for Vietnam, but also the great game of golf. The staging of the tournament was as good as anything we have seen in golf in Asia over the past 20 years. Members of the media certainly have something new and exciting to talk about and Vietnam has a new-found status as one of golf’s most exhilarating new destinations,” commented Spencer Robinson, Chief Communications Officer, Asian Golf Industry Federation

The announcement of the second Ho Tram Open will be made shortly, with expected developments that will see the tournament set out to further establish itself as one of the player’s favourites.