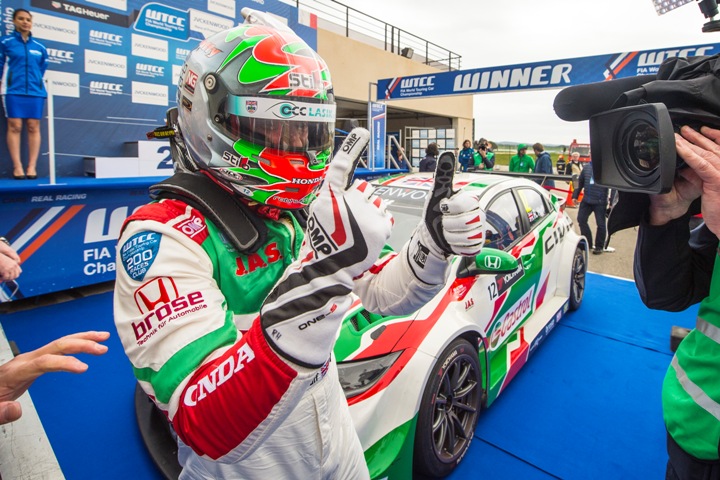 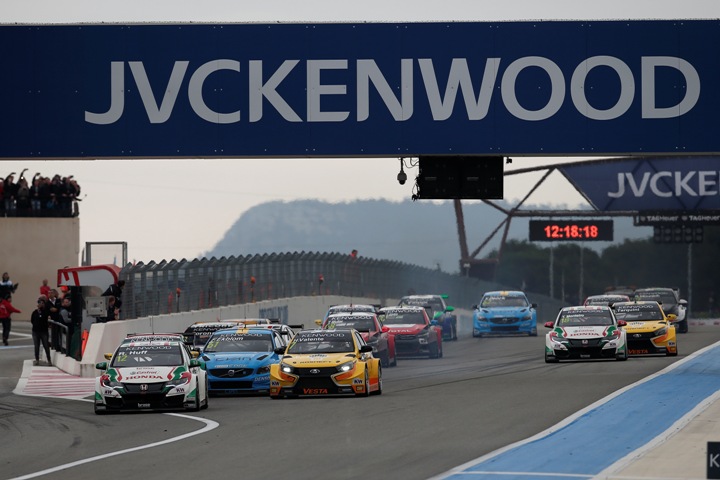 Honda heads WTCC makes’ standings by a point from Citroën

Huff, celebrating WTCC start number 250, took the JVCKENWOOD WTCC Race of France Opening Race spoils on his debut for Honda after powering ahead of LADA’s Hugo Valente at the start. López then made the most of his DHL Pole Position Award to claim the Main Race victory for Citroën by a scant margin of 0.284s as Tiago Monteiro gave chase.

Mehdi Bennani’s second place overall in the Opening Race ensured the first of two wins in the WTCC Trophy for independent drivers with Norbert Michelisz, who beat Bennani to last season’s privateer title, twice finishing third on his first outing as a factory Honda driver.

Polestar Cyan Racing began its long-term commitment to the WTCC with Thed Björk and Fredrik Ekblom both scoring, while LADA was twice in the top five through Valente and Nicky Catsburg.

Victory for López, who now has 51 WTCC starts to his name, means he leads Tiago Monteiro by four points heading to Slovakia from 15-17 April with Huff and Michelisz in close pursuit.

OPENING RACE REPORT: HUFF ON A HIGH FOR HONDA
Rob Huff enjoyed a perfect start to life as a Honda driver in the WTCC, taking his first win since Macau in 2014, 504 days ago. Starting from second under the new-for-2016 reverse-grid format for the first race at each WTCC weekend, Huff made a better start than pole-sitter Valente to take the lead. The 2012 WTCC champion quickly built an advantage of two seconds over Citroën driver Mehdi Bennani on his way to winning on his first outing for Honda. While Bennani, who was starting his 150th WTCC race in front of his watching team boss Sébastien Loeb, claimed the WTCC Trophy honours, Honda enjoyed a hugely successful first race of 2016 with Norbert Michelisz taking third and Tiago Monteiro finishing fourth, the latter climbing from ninth place on the grid. The pair both got past LADA driver Valente with three laps to go, pushing the Frenchman down to fifth. Defending champion José María López finished sixth for Citroën despite falling to 11th on the opening lap. He benefitted from a jump-start penalty for team-mate Yvan Muller, as well as a spin for Fredrik Ekblom and contact between Nicky Catsburg and Tom Coronel on lap five. There was a further clash between the Dutch duo on the final lap, giving Thed Björk seventh in the first race for the Volvo S60 Polestar TC1. Gabriele Tarquini joined Ekblom in retirement after contact from Grégoire Demoustier, who took P10

MAIN RACE REPORT: CHAMPION LÓPEZ HOLDS ON FOR VICTORY
José María López held off a charging Tiago Monteiro to win the Main Race and grab a four-point championship lead. While López led the race from pole and pulled away out front, Monteiro had to recover from losing second place to Yvan Muller. On lap nine he finally got ahead of the four-time champion after contact at the final corner, with his Honda team-mate Norbert Michelisz following him through into third. Monteiro set about cutting the gap to López and the lead pair were running nose to tail starting onto the final lap. Howeve, Citroën driver López just held on by 0.284 seconds, denying Honda a double victory in France. Muller finished fourth ahead of Nicky Catsburg (LADA). Opening Race winner Rob Huff was forced wide at the first corner after contact from Gabriele Tarquini, but recovered brilliantly to finish in sixth after passing Hugo Valente, who was also involved in the Turn 1 skirmish. Mehdi Bennati took the WTCC Trophy honours for the second time in eighth overall ahead of his Sébastien Loeb Racing team-mate Tom Chilton. Polestar’s Fredrik Ekblom completed the top 10, but team-mate Thed Björk failed to finish due to an electrical issue. Tom Coronel beat John Filippi to P11 by just 0.024s in an all-Chevrolet battle.

HUFF TAKES TAG HEUER BEST LAP AWARD
Rob Huff had double reason to celebrate at Circuit Paul Ricard when he was handed the inaugural TAG Heuer Best Lap Award for his lap-record performance in the Opening Race. Going to the driver setting the fastest lap of all during both races, the prize is presented by the WTCC’s new Official Series Sponsor and Timing Partner.

CITROËN MAKES MOTORSPORT HISTORY BY 0.030s WITH WTCC MAC3 BEST
Motorsport history was made in the FIA World Touring Car Championship on Saturday afternoon when Citroën won the inaugural WTCC MAC3 competition, the team trial inspired by professional cycling events such as the Tour de France. In a dramatic finish, the Citroën team of Mehdi Bennani, José María López and Yvan Muller edged LADA (Nicky Catsburg, Gabriele Tarquini and Hugo Valente) by 0.030s after two flying laps of the 3.841-kilometre Circuit Paul Ricard. Honda was forced to settle for third after a slow start from Rob Huff meant it took the Japanese make 2.453s longer than Citroën to get its three cars over the line with Nobert Michelisz and Tiago Monteiro also in action for the team. Citroën scores 10 points toward its FIA WTCC Manufacturers’ Championship total with its WTCC MAC3 victory. LADA earns eight points while Honda collects six. A highlights video is available here: https://we.tl/iOTOZNwxtM 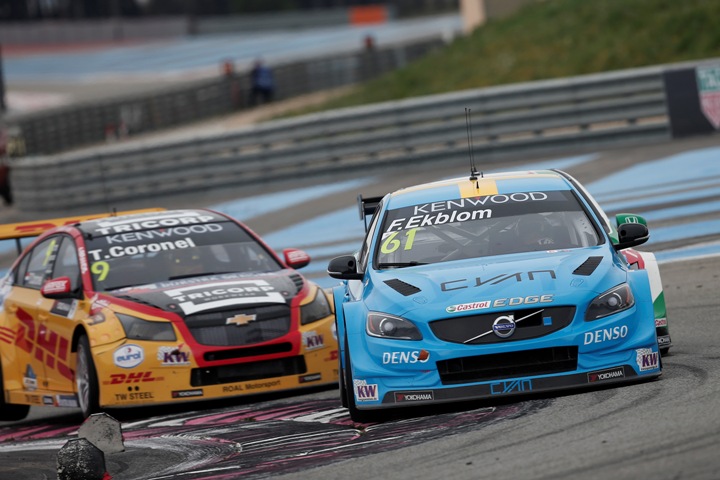 RACE WINNER QUOTES (full transcript available at http://media.fiawtcc.com)
Rob Huff (Opening Race winner): “We’re back! A huge thanks to Castrol Honda Racing for giving me the opportunity to stand on the top step of the podium. I’m not going to lie, we struggled yesterday. Just a couple of very small niggly problems which ultimately when you’re looking for three tenths of a second in qualifying, the difference between being third and 10th, that’s how competitive this championship is. But the boys worked tirelessly overnight to rectify the problems and I think we proved in race one that they fixed the car fantastically and it was brilliant. The car was faultless all the way through. I could see Mehdi in the mirror and could just sort of peg where he was each lap and then I could sort of control the pace quite nicely and really just reeled the laps off. I managed to get a fantastic start, jumped Hugo, and I think really from Turn 1 I made a gap and after two or three laps just managed to hold the gap to Mehdi. I could see a couple of laps in the middle when I just relaxing a little bit he came a bit closer, so I just put a couple of faster ones in in the middle and yeah, the car was absolutely fantastic so a huge thanks to Castrol Honda and the team.”

José María López (Main Race winner): “First I want to start by congratulating Norbi, Tiago did a fantastic weekend, Mehdi, again, had a fantastic weekend, all the Citroën team and all the people involved in the working of the car and everything. Where to start? I think we start from the start. I didn’t know exactly the potential of Tiago with the start, I saw him very quick on the jump of the first race so I had to do a good start, I took a little bit of risk on the jump but I saw in the mirror maybe he didn’t get the right start. But it was important to arrive first at the first corner. Then I managed to pull away, Yvan was struggling a little bit with the pace. Definitely the heavier car makes it more difficult in the race, the drop-off of the tyres is bigger. I wasn’t suffering too much with that so I could pull away a bit, but when Tiago passed Yvan he just came like a train. I was pushing to the limit, he was pushing to the limit, but for me it was not enough. He was just half a second quicker and I think the most important thing is the gap I managed to make in the beginning, otherwise it was going to be very difficult. Also I think Turn 5 was one of my in favour corners because I didn’t need the potential of the tyres there, I did it more with the aero, so I was pulling away from him a little bit in sector two and that was keeping me alive. But he came really strong in the end and it was very difficult. Seven laps to go, I couldn’t keep the pace and it was just about two or three tenths a lap dropping, the tyres were gone. But we knew that, so hats off to Citroën, they worked hard and we knew that was going to be very close. It’s going to be tough but we need to resist at least one more race and then see what happens with the penalty weight.”