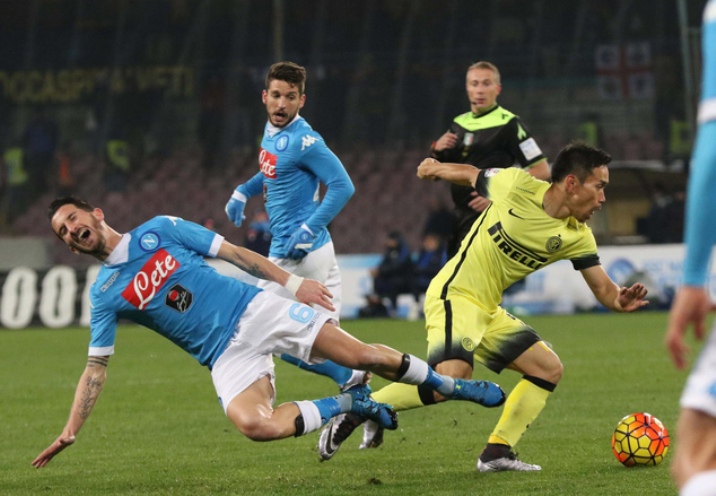 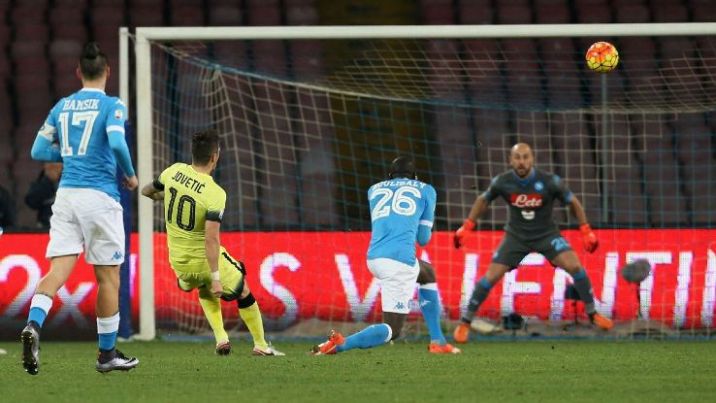 Goals by Mauro Icardi and Marcelo Brozovic earned Inter Milan a Champions League lifeline on the way to virtually ending Napoli’s hopes of a first Serie A title in 26 years with a dramatic 2-0 win on Saturday.

Napoli travelled to the San Siro hoping they could make light of 30-goal Gonzalo Higuain’s three-match ban following his dramatic meltdown in a 3-1 defeat at Udinese two weeks ago.

But Maurizio Sarri’s men were stunned in the fourth minute when an apparently offside Icardi ran behind the Napoli defence to lob Pepe Reina.

Inter then soaked up a lengthy spell of Napoli pressure to hit their second on the stroke of half-time to leave the visitors with a mountain to climb.

Napoli remain in second place at six points behind Juventus but could be nine points in arrears if the champions and leaders account for Palermo in Turin on Sunday, after which there will be five matches remaining in the season.

Inter remain in fourth place but Roberto Mancini’s men are now just three points behind Roma, who occupy the third and last Champions League qualifying spot ahead of their potentially difficult trip to Atalanta.

Amid an ongoing Napoli media boycott, Mancini was left alone to speak post-match.

“In defence we were really strong,” said Mancini. “When they had the ball we didn’t concede anything to Napoli and that means the whole team played well.

“Tomorrow’s game (between Atalanta and Roma) doesn’t change much for us in the sense we still have to keep on claiming as many points as possible from now till the end of the season.

“We’ll have to wait until the final matchday on May 15.”

The last time these sides met — an Italian Cup quarter-final that Inter won 2-0 — Sarri ended up in hot water for calling Mancini “a poof” during a homophobic tirade on the touchlines.

But at a packed San Siro that saw Inter fans rally to the cause, the former Manchester City manager was the one left smiling.

Napoli made a bright start, but after just four minutes Icardi ran on to Gary Medel’s long ball as Napoli’s defence went the other way.

Amid calls for offside, the Argentine striker promptly lobbed the onrushing Reina to give the hosts a shock early lead.

Television replays suggested Icardi was marginally offside, an unfortunate turn of events for Napoli amid their battle to claim a first league trophy since 1990 when the legendary Diego Maradona was still at the club.

Hamsik then found Jose Callejon in space down the right but the Spaniard’s cross into the box was straight at the ‘keeper.

When Danilo D’Ambrosio gave possession away cheaply, the ball was worked to Allan, and Handanovic was at full stretch to tip the Brazilian midfielder’s 25-yard drive over.

Inter finally awoke from their slumber but somehow missed two great chances in the space of two minutes.

Icardi set up Stevan Jovetic but Reina was quick to the Montenegrin’s shot on the turn, then van Perisic sent a header inches wide from Brozovic’s delivery.

But Inter had the momentum and doubled their lead just before the interval, Icardi finding Brozovic unmarked to beat Reina with a crisp angled drive — although Jovetic was the creator, holding off several players before setting up the Argentinian striker.

Napoli fought back early in the second half, Jose Callejon notably narrowly missing the target with a crisp volley after he latched on to Hamsik’s deflected cross.

But Inter remained a threat and could have had their third on the hour when Reina was caught out of his net.