Asian Cup organisers scrambled on Sunday to deal with a sensational protest from Iran claiming that Iraq fielded an ineligible player during their stormy quarter-final defeat.

The Asian Football Confederation (AFC) disciplinary committee was considering the complaint against Alaa Abdulzehra, who is alleged to have committed a doping violation last year.

Iraq won Friday’s spicy encounter against their neighbours and bitter rivals 7-6 on penalties after Iran were reduced to 10 men and extra time finished with the scores at 3-3.

An AFC official did not confirm whether the disciplinary committee could annul the match or reverse the result in Iran’s favour — an outcome which would put them into the semi-finals.

Iran’s objection centres on its claim that Abdulzehra’s contract with Tractor Sazi was terminated after he failed a doping test last August.

But the player told the Iraqi Football Picture Gallery website the allegation was untrue and insisted that his stint at Tractor Sazi ended amicably.

“It’s not true — it’s just a way for (Iran) to overturn the loss,” he was quoted as saying on the Arabic-language site.

“There is no complaint or suspension against me and I’ve never made mistakes of this kind in my whole career.

“In addition Al Shorta sent my name on the squad list for the Asian Cup, and there was no word from the AFC concerning such thing.”

Word was expected from FIFA about whether it was aware of any doping case, but an AFC spokesman said the final decision on the matter would be made by the regional body.

Whether the AFC will take any action remains unclear. Competition regulations state that any protest about the eligibility of players must be made “no later than five days before the (tournament’s) opening match”.

Team officials from Iran and Iraq were not immediately available for comment when contacted by AFP.

Recriminations started immediately after the match when Iran coach Carlos Queiroz complained bitterly about Australian referee Ben Williams, who sent off one of his players for simulation.

As the eligibility controversy swirled, Iraq were preparing for Monday’s semi-final against South Korea seeking their second Asian Cup title in eight years.

The Iranian team was reportedly still in Australia as it awaits the outcome of its protest. – Agence France-Presse 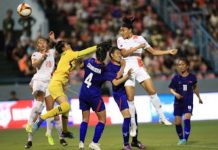