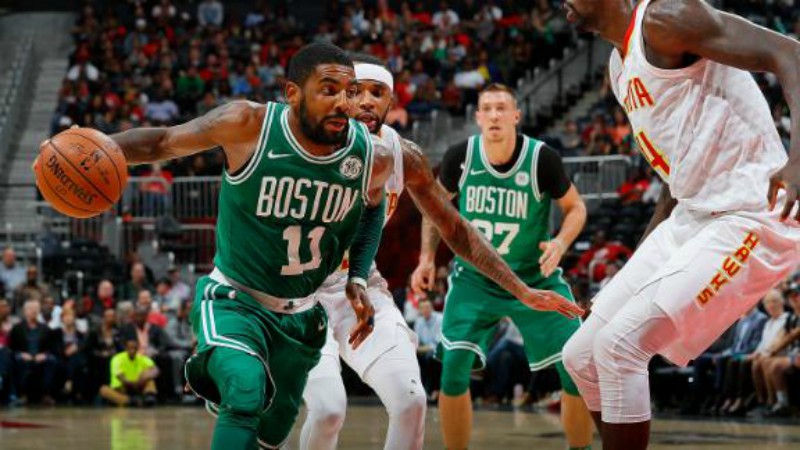 Kyrie Irving exploded for 35 points to steer the Boston Celtics to a ninth consecutive victory on Monday as Golden State extended their winning streak to four games.

Irving broke the 30-point barrier for the first time since his summer move to the Celtics as Boston overcame a battling Atlanta Hawks side to win 110-107 on the road.

Boston needed a three-pointer from Irving with 1min 37sec remaining to finally subdue the Hawks, giving the Celtics a 104-103 lead.

It was the final twist of a game that saw no fewer than 25 lead changes.

“He made huge plays down the stretch,” coach Brad Stevens said of Irving. “I thought he not only made the plays, but he made a lot of right reads, too.”

Stevens said he suspected Irving might be due a big performance after an 11-point outing in his previous game at Orlando on Sunday.

“When you’re coaching against people, I always look at the box score for the game before,” Stevens said.

“If they really struggled but they’re really good, that’s just scary stuff. Guys like that don’t have quiet nights twice in a row.”

But Irving’s virtuoso display was the main talking point amongst his team-mates after the win.

“It’s exciting to be out there on his side, watching him do all those incredible things,” said Celtics rookie Tatum. “He’s a great player.”

Irving, meanwhile, was pleased with the way Boston held on to close out the win.

“We had to get our act together,” Irving said. “You could just tell that mentally and physically, we were dragging a little bit.”

Boston now lead the Eastern Conference with a 9-2 record. Atlanta, who had stunned Cleveland on Sunday in an upset win, are bottom of the conference at 2-9.

In the Western Conference, Kevin Durant and Draymond Green steered Golden State to a scrappy 97-80 victory over the Miami Heat at the Oracle Arena.

Durant scored 21 points with eight rebounds while Green weighed in with 18 points and nine rebounds as the Warriors were made to work for victory by a physical Miami team at Oracle Arena.

The win saw the Warriors improve to 8-3 in the standings, putting them alongside leaders Houston.

Curry added 16 but had an off night with his normally reliable three-point shooting, making just two of nine attempts.

“It wasn’t pretty we couldn’t make our shots, so we knew we had to just stick to the basics, play physical and grind out a win.”

Miami’s top scorer was James Johnson with 21 points, followed by Goran Dragic who scored 19 and Kelly Olynk with 10.

The Warriors had opened up a 50-37 halftime lead but were never able to fully cut loose from a dogged Miami team.

Miami rallied to cut a 20-point deficit to just 10 points in the third quarter but the Warriors were able to keep their opponents at arm’s length for the remainder of the contest.

In Monday’s other game, the Brooklyn Nets held off a late Phoenix Suns rally to clinch their first road victory of the season.

D’Angelo Russell scored 13 of a 23-point haul in the final nine minutes to help the Nets close out the 98-92 win in Phoenix.

“I just didn’t want to lose and wanted to do whatever it took to win,” said Russell. – Agence France-Presse