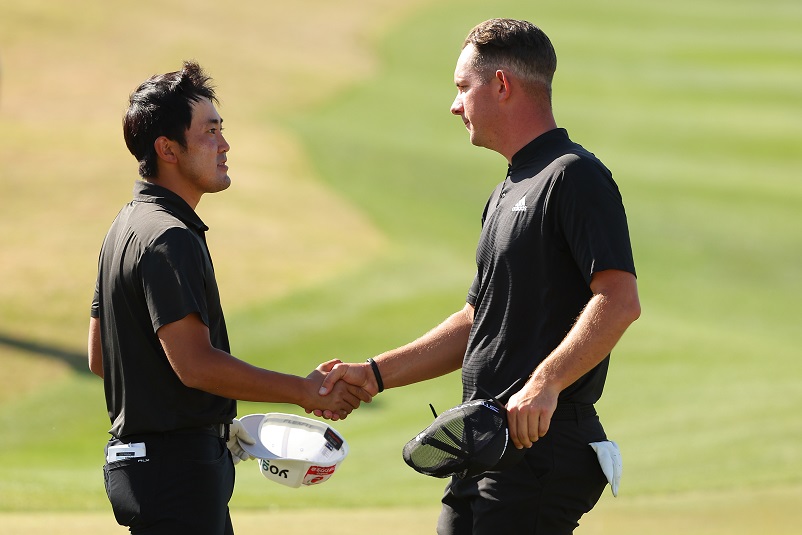 Japanese debutant Takumi Kanaya extended his dream run at the World Golf Championships-Dell Technologies Match Play when he defeated Lucas Herbert twice on Friday, first with a convincing 5 and 4 victory in their final Group 7 match and then prevailing over the Aussie again in a sudden-death playoff to book his place in the Round of 16.

It was, however, the end of the road for Asia’s two other representatives in the elite 64-man tournament as Korean duo Sungjae Im and Si Woo Kim bowed out of the US$12 million showpiece at Austin Country Club.

After an opening defeat to Xander Schauffele on Wednesday, the 23-year-old Kanaya has since emerged as one of the surprises in Austin with his gutsy run. The slightly built 23-year-old clawed back from two down with four to play to beat Tony Finau 1-up in his second match and then dominated Herbert with five birdies in 14 holes of their final group match.

Kanaya and Herbert, with two wins each, then proceeded into extra time where the Japanese made a superb par save on the par-4 first hole after finding the fairway bunker. He earned his place in the next round after Herbert, the World No. 44, missed his par attempt from inside of three feet.

He became the first Japanese golfer since Hideto Tanihara in 2017/4th place to move beyond the group stage and next faces Canadian Corey Conners on Saturday morning with the winner qualifying for the quarterfinals in the afternoon. Toru Taniguchi holds the best finish by an Asian when he came in third in the 2001 edition.

“I’m feeling so great. I am happy I got through and I’m proud of myself,” said Kanaya.

His magical run has been due largely to a never-say-die attitude. As a child, Kanaya was taught by his father, Hiroshi, to keep fighting till the fat lady sings and his determination was for all to see. “My father tells me when I was young, anytime don’t give up, keep going, keep going, keep trying, don’t give up. He would say that always to me,” said Kanaya.

“The game against Tony was tough, so through 14, 2-down but I never give up. I’m pushing myself to play good golf. I feel so good today and was hitting it straight, putting good. I have confidence. (In the playoff) I hit into the bunker and had a tough lie. I lay up but I never give up any shot. I think I have a small chance I can make up-and-down (for par) and I was focused on making it. I thought we’d go to the next hole. It’s a tough finish for Lucas, very much pressure.”

Now that he is in the weekend play, he dreams of emulating Taniguchi’s high finish. “He is a great player, he hits it short but straight and is great at chipping. I have same style of playing as him,” Kanaya smiled.

Three-time PGA TOUR winner Kim notched a convincing 6 and 4 win over South African Christiaan Bezuidenhout for his second point in Group 13 but it was England’s Tyrrell Hatton who progressed into the next round from the group following his third win where he defeated American Daniel Berger 2-up.

Im, a two-time TOUR champion, suffered a second defeat in Group 4 when he went down 2-up to reigning FedExCup champion, Patrick Cantlay.