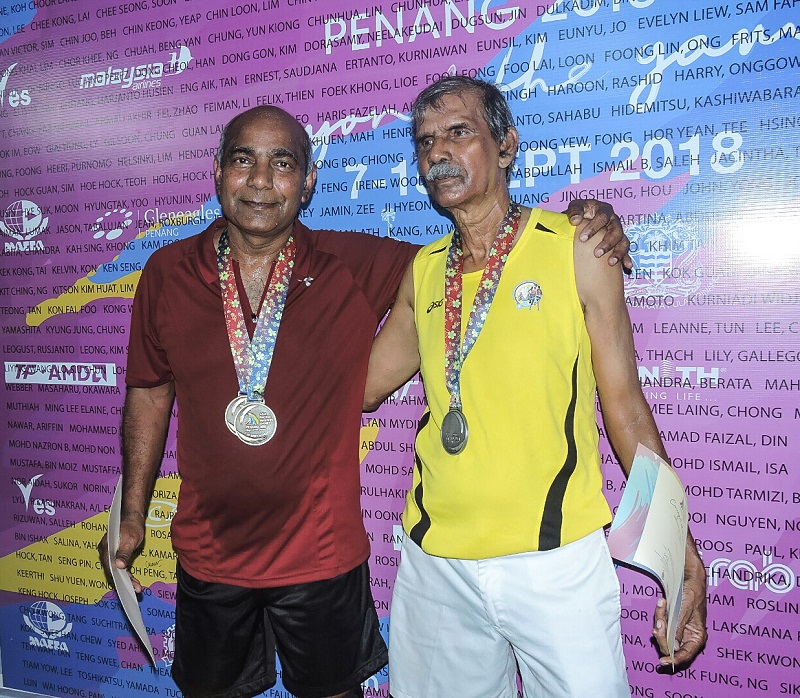 The 72-year-old Penangite, who had been a Penang state coach alongside badminton legend the late Datuk Eddy Choong, carried on playing in the tournament despite suffering the injury on Wednesday.

He started the competition at the Penang Badminton Association Hall full of confidence, but a hamstring pull during the men’s doubles 70 years and above match foiled his chances.

Although he fought gallantly to down Australian Anthony Lourdes 21-16 – 21-11, in the semis on Friday, Karunakaran was no match foranother AustralianSomaluSinniyain the final, going down 10-21, 12-21 in 22 minutes on Saturday morning.

“My priority was to win in the singles and I joined the doubles just for fun, but unfortunately I had the injury during my doubles match.

“Although I could not play at my best, especially in the final, I will not take any credit away from my opponent Somalu who is a good player. It would have been a better final if not for my injury,” said Karunakaran.

Karunakaran, who used to work in a textile company,has been playing badminton for more than 40 years. He started training during his mid 20’s and represented the Penang Amateur GansUnited badminton team.

“Back then, I was the only Indian player in the squad, training with all my Chinese friends.

“The best matchI played was during one of the Penang Closed badmintontournament back in the 60’s. I played with poor fitness and practice due to mybusy work schedule. However, I managed to win the first gameagainst one of the greatest players of the time,MohFuh Lian, 10-3. I eventually lost the match, but I walked out of the court feeling proud “

“Badminton is not a cheap sport. When I worked at the textile company, I would spend about RM 200-300 per month just to purchase a quality net and racquet. Now being a retired person, it’s difficult to spend so much for me.

But I am still happy to be here meeting new friends.”

The highlight of the day was the men’s doubles 35 years and above final involving the Badminton Association of Malaysia representatives Muhammad Hafiz Hashim and Sairul Amar Ayob.

The badminton finals were among a handful of sports which completed their competitions on Saturday.
Later in the evening, the Asia Pacific Masters Games 2018 was officially declared closed by the Penang Chief Minister Chow Kon Yeow during the closing ceremony.

The closing ceremony, held at the SPICE Convention Center roof garden, was attended by the participants, officials, volunteers and members of the public.

Among the highlights of the closing ceremony were the joget and boria dance performances and a fireworks display which lit up the Penang skyline.

The APMG 2018 was the inaugural multi-sport Masters Games event to be held in Asia. A total of 5,564 participants from 64 countries took part in 22 sports from 6th-15th September at various venues in Penang.