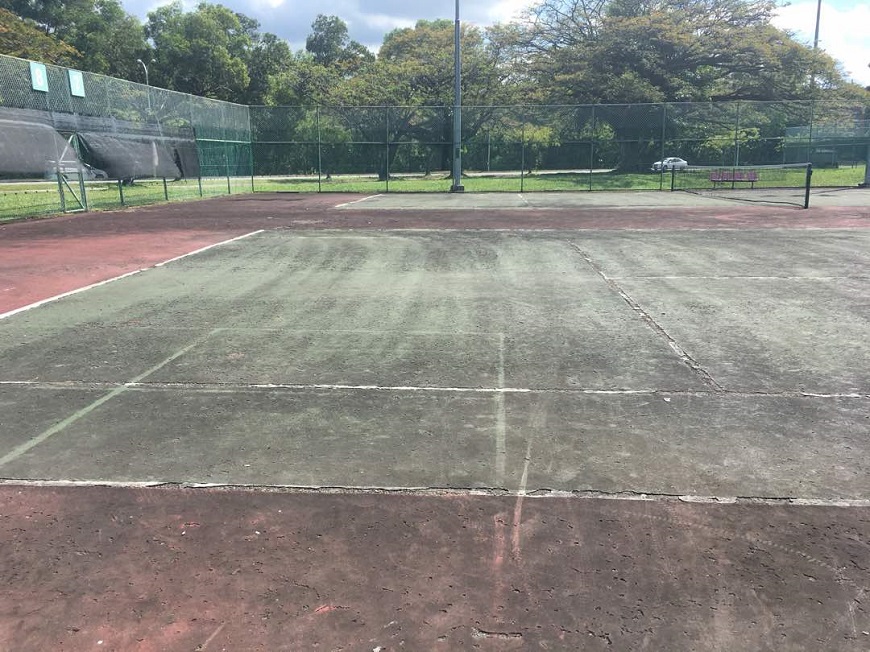 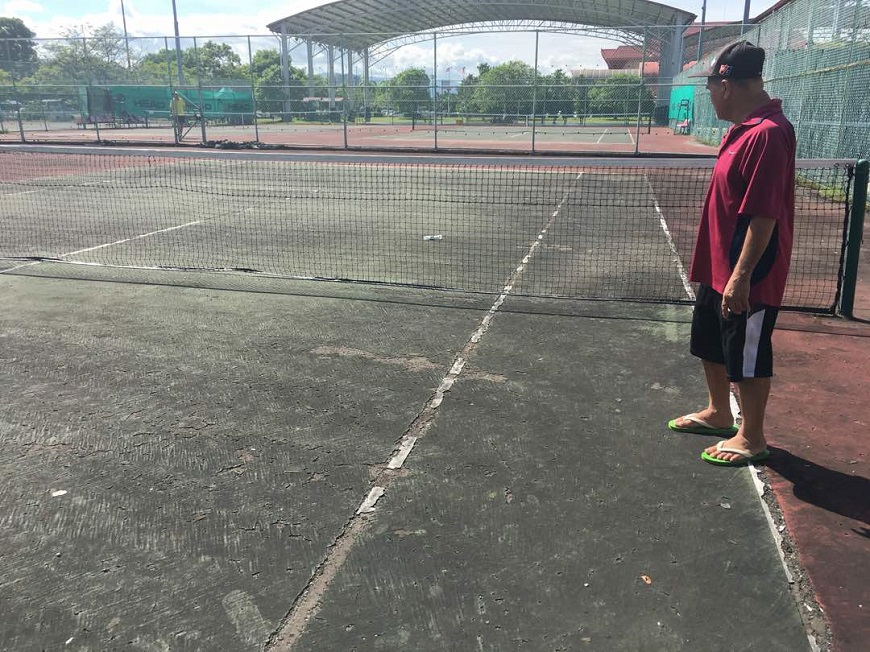 Sabah Tennis President have been bombarded by tennis players, coaches and parents on the current status  of the Likas tennis courts.
Several coaches have also voiced their concern and disappointment with the tennis courts condition.
One group captain of one of the several group, Edmund Jaikul playing at the tennis courts commented that the last time the courts were resurfaced was during the former sports minister Datuk Peter Pang’s time which has been more than 8 years.
Those courts that were resurfaced was only 2 of the 13 courts. Prior to that the last resurfacing was during the SUKAN MALAYSIA when Sabah was the host which is in 2002, 15 years ago.
According to STA President Johnson Koh, STA has written in to the Lembaga Sukan and Ministry several times but were acknowledge as waiting for funds “peruntukan”.
5 years back STA wrote and applied for the resurfacing and the roofing of the courts.
STA is grateful that the roofing of the 4 courts were implemented last year, which brought a big relief to the organizers and competitors of tennis tournaments.
It also gave tennis players and parents a big good feeling for they can play even in the noon sun and raining days.The other  sports that benefited from STA President’s relentless  effort are volleyball, sepak takraw and basketball as they were also roofed at the same project effort.
However the courts surface has deteriorated more and have pot holes and cracks which can derail players runs and tennis balls chasing momentum. This  current situation is dangerous to the players.
STA have again this year met the Sabah Chief Minister through the assistance of YB Luyang Datuk Hiew.
The CM have noted back to the sports ministry. They then apply to the Ministry of finance for funds and this is not good news as the ministry have been allocated only certain funds and they have to take care and maintain the  more than 5 district facilities.
These facilities are also in urgent need of maintenance uplift especially Keningau tennis courts.
STA President met up with YB Luyang again to seek further help to utilize Luyang YB funds and also to seek for the CM to give special allocation on this urgent taskthrough YB Luyang.
STA have given YB Luyang all the back up data and photos for this purpose.
YB Luyang have also inspected the courts during the construction and completion of the roofing project.
STA wants the public to know that STA have taken all the efforts and reach all avenues of power in the Sabah state to get the courts resurfaced.
STA president Johnson Koh hope this last effort through YB Luyang as a ruling representative YB  will bear fruits.
In the meantime Johnson Koh appeal to the players and stake holders to be patient and wait for the positive response from the government. – RIZAL ABDULLAH