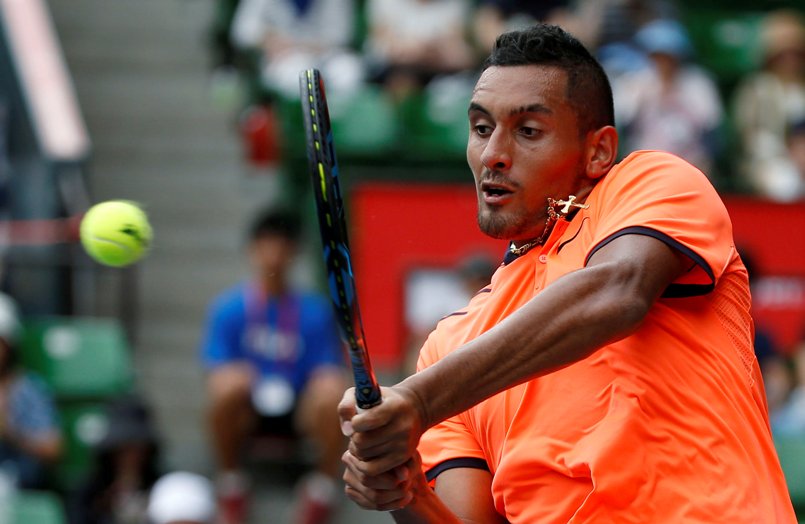 Australian firebrand Nick Kyrgios will take on Belgium’s David Goffin at the Japan Open final after both men stomped on more experienced opponents in their semifinals Saturday.

Sixth seed Kyrgios overpowered French second seed Gael Monfils with a succession of fiery forehand shots that only intensified in the second set, taking him to a 6-4, 6-4 win.

Fifth-seeded Goffin, the world’s number 14, also beat fourth seed Marin Cilic, ranked 11th in the world, in a 7-5, 6-4 victory, demonstrating he is a strong contender for the Tokyo trophy.

The final will be the first tour-level encounter between the two men, with Goffin vowing to make Kyrgios work hard.

“I have capacity to win a tournament like this,” Goffin said.

“Nick has fantastic serves, big forehands. I have to make him run a lot,” soft-spoken Goffin said. “He is really creative. You never know what he is going to do. (I will) try to be…aggressive and make him run.”

Meanwhile Kyrgios, known for his controversial outbursts and unpredictable performances, shrugged off fans’ expectations and called the final “just a tennis match”.

“I am going to go into it like any other match. It’s just a tennis match at the end of the day. I am going to go out there…try to enjoy myself and see how it goes,” he said.

On Saturday, Goffin showed off his consistency against Cilic, hitting deep returns to keep his opponent under pressure and away from the net while waiting for the Croatian to make mistakes.

The strategy paid off, and Cilic visibly started to struggle in the second set, making a series of mistakes as his legs began to give up.

“In the second set, he seemed a little bit tired. I started to win…points by just hitting really long in the middle. He made some mistakes,” Goffin said.

“Execution of shots…I was not too good today,” Cilic said. “I was missing by a little bit, not by too much, but obviously these matches are decided always by small margins.”

The Tokyo tournament has been plagued by injuries that have sidelined many of the finalists’ big-name rivals.

Defending champion and US Open winner Stan Wawrinka withdrew from the Tokyo event due to back trouble, while home favourite Kei Nishikori, winner in 2014 and 2012, was unable to finish his second-round match Wednesday because of muscle strain.