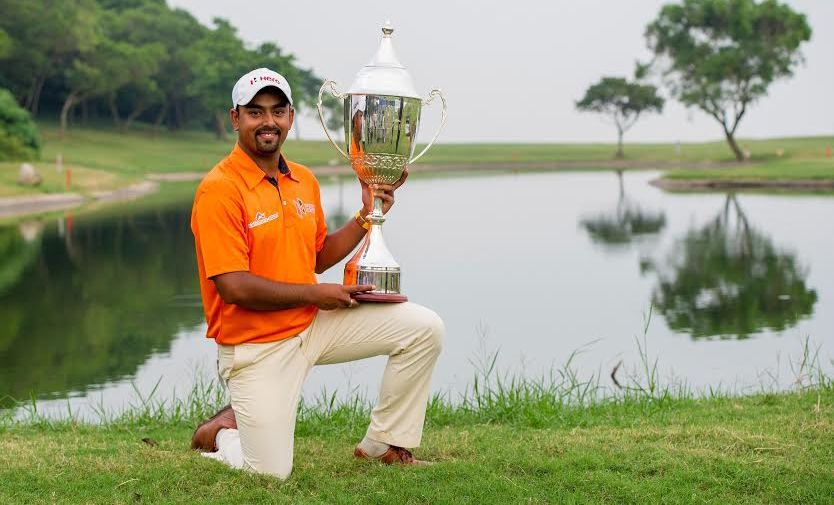 Lahiri started the final round two shots behind overnight leader Hend and trailed by four at one stage at the Macau Golf and Country Club before rallying on the home stretch to pip Hend and Thailand’s Prom Meesawat.

The 27-year-old Indian signed for a final round of five-under-par 66, which included six birdies, and a winning aggregate of 17-under-par 267. The winner’s cheque of US$162,000 raised his season’s tally to US$504,689 as he consolidated his second place on the Asian Tour’s Order of Merit and narrowed the gap on leader David Lipsky of the United States.

Hend, the defending champion who arrived in Macau in top form after winning the Hong Kong Open last week, lipped out a par putt from four feet on the 72nd hole as the roles reversed from last year’s edition where Lahiri was the runner-up. Hend settled for a 69 while Prom charged up the leaderboard with a 66.

“It’s really special. Hendy was playing great golf and it was sad to see him missing that putt on the last,” said Lahiri, who secured his second win of the season and fifth Asian Tour victory.

“I knew he was playing some good golf and I told myself that I was going to keep coming back, keep coming back and keep attacking. I wanted to make him think I was not going to go away. I think I played really well.”

Hend took charge early on and doubled his overnight lead to four shots after nailing an eagle on two and a birdie on seven. However, a tenacious Lahiri fought back with birdies on eight and nine to make the turn only two back. The pivotal moment came on 14 when Lahiri hit a superb seven iron into the par three hole for an easy birdie while Hend bogeyed.

Lahiri, who had opened his campaign with a stunning 61 on Thursday, then led for the first time in the final round with a birdie on 15 but Hend leveled with a birdie at the next hole until his slip-up at the last.

“I hit a perfect golf shot on 14,” said Lahiri. “I had just missed a putt at the previous hole and I knew I needed a birdie to catch Hendy and that was just magic the way it came down. I hit a seven iron as hard and high as I could and it came out perfect. One of the best shots of the week.

“I was chasing all day and on 14, that’s where the momentum switched a bit. It’s fantastic to win my second of the year. I missed the cut last week (in Hong Kong) after a long time so I had time to think about what I was doing wrong and how was I was not thinking positively on the course. I’m happy I managed to turn that around.”

Hend was disappointed he missed his par putt which would have forced a play-off and also the opportunity to join China’s Zhang Lian-wei as the only two-time Venetian Macau Open champion.

“I hit too many loose shots and then on the last hole, I had a lip out which I thought I put a good putt on it. Unfortunately it lipped out. I looked up to see it lipping out. I thought I had made the putt,” said Hend.

Prom came home strongly in 32 but fell one short shy of forcing a play-off. He rued a rollercoaster start where he went bogey, birdie, bogey, birdie in his opening four holes. “I had a good back nine but it was up and down in the first four holes.

But to finish on five under for the round, I’m happy. My goal was to stay inside the top-three. It was not going to be easy to catch Hendy or Anirban,” said Prom.

Meanwhile, The Venetian Macao® has extended its title sponsorship of the Venetian Macau Open for a further two years until 2016 following its successful association with Macau’s premier golf championship this week. The Macau Sport Development Board (MSDB) and its partners, the Asian Tour, Macau Golf Association and IMG, jointly announced that next year’s edition will return to the Macau Golf and Country Club from October 15-18, 2015.