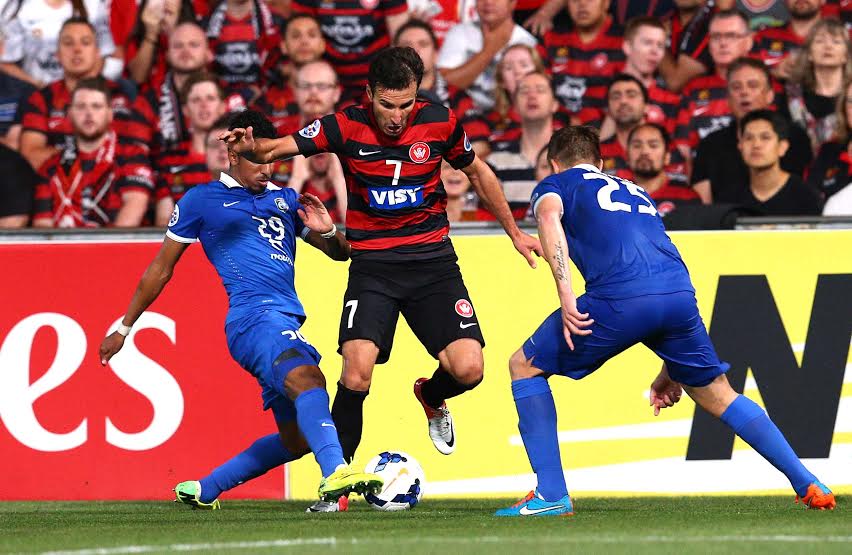 Western Sydney Wanderers took a huge step towards becoming the first Australian side to be crowned Asian champions after a second half strike from substitute Tomi Juric secured a 1-0 win over Saudi Arabia’s Al Hilal in Saturday’s AFC Champions League final first leg at Parramatta Stadium.

Juric was on hand to slide home Antony Golec’s cross four minutes after the hour mark as continental debutants Western Sydney scored with their first effort on goal after two-time Asian champions Al Hilal had dominated for the majority of the opening 60 minutes.

But after recording a sixth consecutive cleansheet at home in the competition, Western Sydney will take a slender one-goal advantage into next Saturday’s second leg at King Fahd Stadium in Riyadh.

With a capacity crowd inside Parramatta Stadium creating an electric atmosphere at kick-off as fans from both sides provided a colourful backdrop on a cool evening, it was Al Hilal who started on the front foot against a well-disciplined Western Sydney side.

But while Western Sydney goalkeeper Ante Covic was the busier of the two goalkeepers, Al Hilal struggled to turn that edge into a genuine effort on goal with the visitors restricted to long range efforts which posed no threat with the home side looking to extended their five-game cleansheet record at Parramatta Stadium in the competition.

Al Hilal’s best chance arrived in stoppage time as striker Nassir Al Shamrani, who had scored 10 goals en route to the final, blazed high and wide from inside the penalty area with Covic again untroubled.

Covic was forced to block low at his near post at the start of the second half from Al Hilal captain Saud Kariri as the two-time AFC Champions League winner cut into the penalty area from the right and attempted to cut the ball back across the face of goal.

Thiago Neves then guided a tame effort towards goal from the edge of the penalty area five minutes after half-time, but while it was on target, a composed Covic had time to make a regulation save low to his right.

And with Al Hilal remaining on top as the second half progressed, Western Sydney coach Tony Popovic introduced Juric in a straight swap with lone striker Brendon Santalab just before the hour mark.

Juric had been a doubt for the first leg having missed the opening two games of the A-League season due to a groin strain, but the decision by Popovic to start the striker on the bench paid off just six minutes later as Western Sydney’s number nine ghosted into between Al Hilal’s centrebacks to prod home Golec’s first-time cross from the edge of the six-yard area.

Al Shamrani blazed over with 20 minutes remaining as Al Hilal looked for an instant response, but it was Western Sydney who nearly doubled their lead two minutes later as Juric stuck the foot of the post from the edge of the penalty area with goalkeeper Abdullah Al Sdairy beaten.

Australia international Matthew Spiranovic, making his first appearance since the 2014 FIFA World Cup following ankle surgery, was introduced with a quarter of an hour remaining as Popovic sought to hold into his side’s advantage.

And despite Al Hilal pressing forward in the closing stages in search of a potentially valuable away goal, the visitors were unable to avoid a second consecutive away defeat in the competition as Covic stood firm.