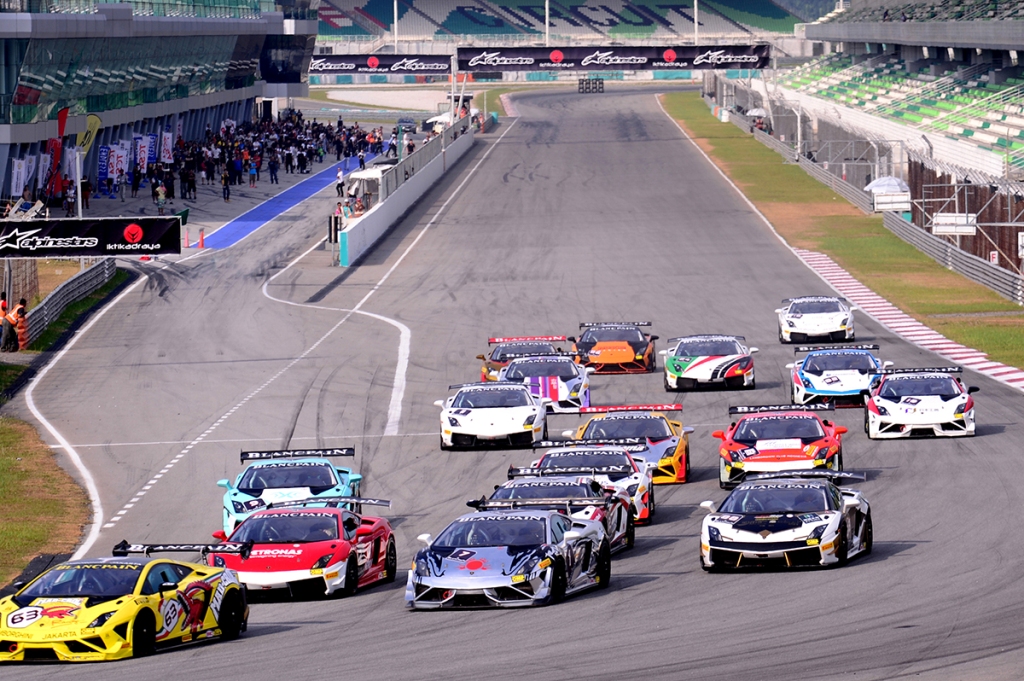 The third round of Malaysian Super Series, which will be held at Sepang International Circuit (SIC) this weekend, Friday 28th until Sunday 30th June, which will have an added attraction in form of the prestigious Lamborghini Blancpain Super Trofeo Series, which is returning to Malaysia for the second consecutive year.

Dubbed as the world’s fastest one-make series, the championship, which features the new Gallardo LP570-4 Super Trofeo machines this year, would be hosting its second round of the new season after a hugely successful opening round at Shanghai International Circuit last month.

That sensational round saw pre-season favourites Davide Rizzo and William Lok being upstaged by the partnership of Jiang Xing and Max Wiser in the opening Race 1 before the dynamic duo produced a perfect Race 2 on the following day to register their first race this season.

“With their awesome power and thunderous roar of the mean machines, the Lamborghini Blancpain Super Trofeo Series will be a very exciting race for the fans to enjoy this weekend here at our circuit,” said SIC Chief Executive Officer, Datuk Razlan Razali.

Organised by Super Sports Car maker Automobili Lamborghini and supported by luxury Swiss watchmaker, the series would travel this season to Korea, Japan and the legendary Macau Grand Prix before proceeding to the Super Trofeo Asia World Finals in Vallelunga, Italy in November.

The Super Trofeo series was first launched in 2009 in Europe as a platform to further enhance the brands emotional ties to motorsport. Now in its fifth consecutive year, Super Trofeo as an international race series now celebrates not only its second year in Asia, but its inaugural series in the United States.

Promoted as the world’s most exclusive platform for the ultimate lifestyle experience and encouraging the participation of gentlemen drivers, the 2013 series provides bigger excitement than the previous season with the new Gallardo LP 570-4 Super Trofeo 2013 machines fitted with enhanced aerodynamic efficiencies, increased thermal performance and a stronger balance as compared to the 2012 Gallardo model.

Similar to the opening round in Shanghai, the drivers would be competing in two races in Sepang with the first race on Saturday and Race 2 on Sunday. They would have their first official practice session on Friday.

Apart from the Lamborghini Super Trofeo series, fans would also be entertained by actions in four other international series brought in by race promoters from Macau and Hong Kong; making this weekend’s event a showcase of motor racing action which fans would not want to miss.

The Touring Car Series Asia (TCSA) – Road Sports Challenge, the TCSA N2000 Series, the TCSA by IMSP and the Asian Classic Car Challenge (ACCC), however, would not be unfamiliar to the local fans as they have regularly been featured at the MSS in the past.

For the MSS, Round 3 would again be run as a one-hour endurance race, like the previous Round 2 that happened last month, with competing teams having an option to field a maximum of two drivers.

Unlike the previous round though, the competitors for Round 3 would be separated into two races on Sunday starting with the one-hour GT Open and Sports Production classes before the commencement of the combined race for Touring Production and Malaysian Touring Car classes.

The Touring Production Class is currently led by the partnership of Damian Dielenberg and Tommy Lee with defending champion, Perajun Krishnan in close second.

The Malaysian Super Series 2013 will promise an exciting race this weekend at Sepang International Circuit, a must see event. Free Grandstand entrance for public while paddock passes are selling at RM50 each and first 200 visitors can look forward to complimentary refreshment pack for Sunday’s thrilling finale.