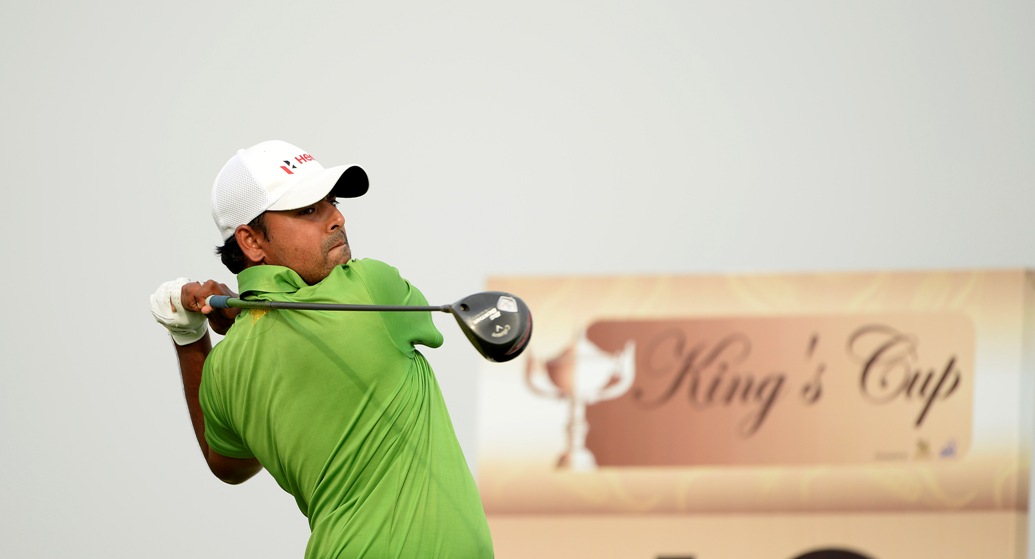 India’s Anirban Lahiri set up a mouth-watering showdown with some of Thailand’s finest golfers after taking a slender one-shot lead with a third round four-under-par 68 at the King’s Cup on Saturday.

Lahiri, who led from the opening day, surprised even himself after returning to find himself back atop the leaderboard at the US$500,000 Asian Tour event.

The 27-year-old struggled early in his round as he could only turn in 36, having one birdie offset by a bogey-four on the fifth hole.

“I’m actually surprised to find myself in the lead as I didn’t play well today especially on the front-nine. It was quite a struggle there. It felt like every step I took, I took two steps back again,” said Lahiri.

Lahiri’s game came back to life with two birdies in three holes after the turn. He dropped another shot on 13 but picked up a further gain on 15 before an eagle-three on the closing 18 saw him displacing Thaworn at the top with his three-day total of 16-under-par 200.

“I knew Thaworn was off to a hot start and I was struggling on the front-nine. I was just trying to catch up and stay ahead. So it was really nice to finish off with an eagle as I really needed that boost,” said Lahiri.

Thaworn, who wore yellow to honour the King, is expected to breathe down Lahiri’s neck when they tee off together in the final group.

“I want more wins. 17 titles is not enough and I’m going for more. It’s going to be an exciting day tomorrow as anything can happen and may the best man win,” said Thaworn.

The 47-year-old got off to a scorching start with five birdies in his opening six holes.

He could not replicate his birdie blitz after the turn, managing only one birdie on 11 but was his score was still enough to keep him in contention for his 18th win on the region’s premier Tour.

“It was a good start and I was glad I took all my chances there. Not as many birdies in the back-nine but it’s okay as I didn’t drop any shots and I’m still in contention. I’m confident,” said Thaworn.

Unlike Thaworn, fellow countryman Sutijet will be hoping to get the better of his nerves when he steps back to the tee on the final day.

The 27-year-old, who plays primarily on the domestic circuit, is in the final group with Lahiri and Thaworn.

Ranked fifth on the local tour, Sutijet is aware of the higher level of competition at an Asian Tour event and hopes to maintain his composure for his last 18 holes.

“It was a good round but I’m not sure how I’ll be tomorrow as I think I’ll be nervous. I will probably turn to meditation to calm myself down before I step onto the first tee tomorrow.

“The level of competition is definitely higher at an Asian Tour event and every player has a good chance to win. Hopefully, I can stay calm and do well tomorrow,” said the Thai.

Leading scores after round 3 of the King’s Cup being played at the par 72, 7449 Yards Singha Park Khon Kaen GC course (a- denotes amateur):