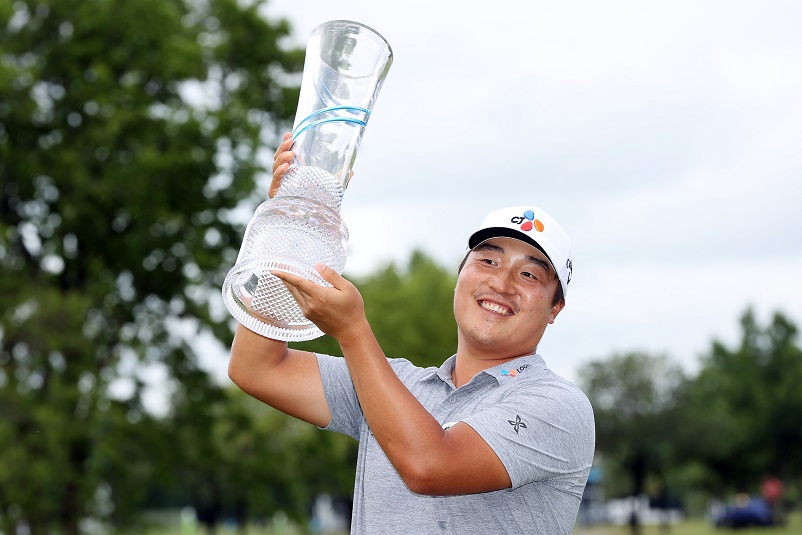 As K.H. Lee stood over a critical 15-foot par putt on the 16th hole Sunday at the AT&T Byron Nelson, a ferocious lightning strike nearby jolted him out of position and left him looking upward toward the sky. The horn would sound soon after, meaning a rain-soaked Lee would have to wait just a little bit longer for his maiden PGA TOUR victory.

More than two hours later, the 29-year-old finally stood back over that putt only to bogey for just the third time all week. Not that it mattered, of course. Lee might have begun the restart inauspiciously but he would close it in style, posting a final-round 6-under 66 to win by three shots over Sam Burns.

“I was not that nervous before the round, but I was very nervous when we resumed to play,” he said. “I was shaking inside last three holes.”

No one seemed to notice. The two-time winner on both the Korean and Japan tours promptly birdied the ensuing par-3 17th, pushing his lead over Burns to an insurmountable three strokes with one hole to play. That proved to be enough for Lee, who became the eighth Korean to win on the PGA TOUR and the second this year, after Si Woo Kim won The American Express in February.

“When I made bogey at 16, it felt like I had lost a little momentum, so I wanted to try and be more aggressive on Nos. 17 and 18,” Lee said. “Hit a good shot on 17, which was important to good some momentum back and have a good finish.”

The finish proved even more special when, after sinking a birdie to end the week, he was congratulated greenside by his wife, Joo Yeon Yu, and fellow Korean colleagues K.J. Choi and Sung Kang.

Burns, who earned his own maiden TOUR win two weeks ago at the Valspar Championship, would go on to finish solo second at 22-under. He tapped in for birdie at the 72nd to pull out of a five-way tie alongside Patton Kizzire, Daniel Berger, Scott Stallings and Charl Schwartzel.

The Louisiana product slept on a one-shot lead overnight, but bogeyed the first hole on Sunday to drop into a tie alongside his Korean playing partner. Lee capitalized on the error, carding birdies on each of the next three holes to open up an advantage he would not relinquish.

“(K.H.) played awesome. I was really proud of him,” Burns said. “When it was tough he hung in there and he got off to a great start. It was kind of gettable in the beginning. Got off to a really fast start, and then kind of midway through got tough for everybody, and he kept hitting one shot after the next and never gave anybody a chance.

“It was fun to watch. I was proud of the way he played, and it was tough to beat him today.”

Lee finished at an impressive 25-under 263 for the week, posting no worse than a 67 over four days. He rose 55 spots to No. 29 in the FedExCup Standings, the highest mark of his young PGA TOUR career, now just 80 starts old.

He also becomes fully exempt on TOUR through the 2022-23 season and, in the short term, earns a coveted spot in next week’s PGA Championship at the Ocean Course at Kiawah Island. He entered the AT&T Byron Nelson as the third alternate in next week’s field.

The soon-to-be-father also enters the conversation for a potential roster spot on Captain Trevor Immelman’s International Team, which will look to take down the United States in the Presidents Cup next September at Quail Hollow Club.

“Thinking of joining the Presidents Cup, that would be such a great present for me,” he said. “To represent my country and my team, those kinds of things are so special.”

Lee became the fourth Asian winner of the AT&T Byron Nelson and the second in as many tries, after Sung Kang captured the last rendition of the event in 2019. Shigeki Maruyama (2002) and Sangmoon Bae (2013) also claimed wins at the Byron Nelson.

Kang made sure to be among those congratulating him greenside afterward.

“It is always good to have Korean players around me and to play the TOUR together,” Lee said. “It definitely helps my game.”