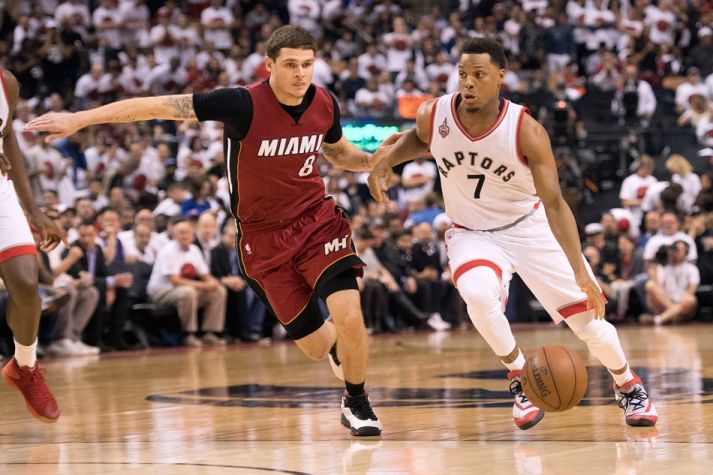 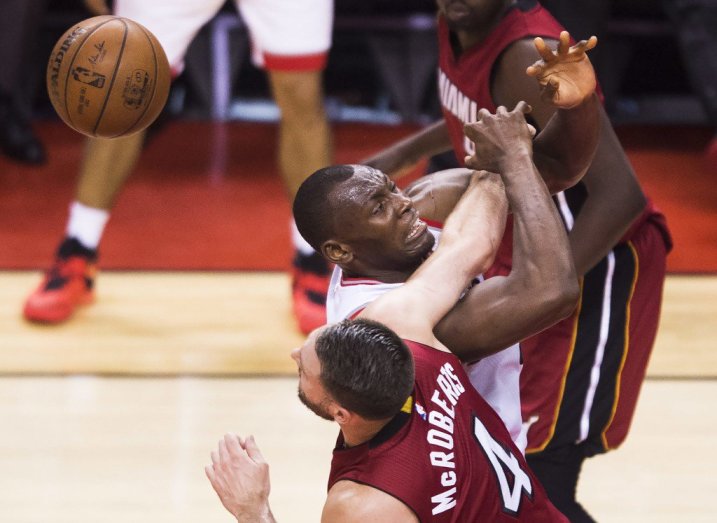 Kyle Lowry is relishing the prospect of taking on LeBron James and the Cleveland Cavaliers after leading the Toronto Raptors into the Eastern Conference finals for the first time in franchise history on Sunday.

Lowry scored 35 points as Toronto completed a 116-89 win over the Miami Heat to seal a 4-3 series victory — and set up a showdown with James and the Cavs on Tuesday.

Toronto will start against Cleveland with the odds stacked against them, having battled through two marathon seven-game series to reach the conference finals.

Cleveland however head into Game One well rested after back-to-back 4-0 sweeps in the previous rounds.

Yet Lowry said he is looking forward to pitting his wits against the in-form James and the likes of Kyrie Irving and Kevin Love.

“I’m looking forward to the opportunity to playing against those guys,” Lowry said.

Raptors coach Dwane Casey says the challenge posed by Cleveland will be “another step for us” as his team chase the ultimate dream of an NBA Finals victory.

“I think we’ve done everything we set out to do, but again, we’re not done yet,” said Casey. “This group is hungry and never say never. I know one thing, our guys will compete.”

Lowry and teammate DeMar DeRozan stole the show as Toronto powered their way to a convincing victory in front of a raucous home crowd at Toronto’s Air Canada Centre.

Lowry had nine assists and seven rebounds while DeRozan finished with 28 points and eight rebounds as Toronto finally pulled away in the second half.

– ‘Nothing easy in postseason’ –

Goran Dragic and Dwyane Wade led the scoring for the Heat with 16 points apiece.

The Raptors had led 25-24 after an even first quarter, with DeRozan scoring 11 points. Toronto built a 53-47 lead at half-time but the real damage was done in a dominant run in the third quarter.

Miami rallied to get within six points as the seconds wound down in the third, but a two-pointer on the buzzer by DeRozan restored Toronto to an eight-point lead heading into the final quarter.

With a first-ever place in the Eastern Conference finals beckoning, the Raptors turned the screw and quickly extended their lead with both Lowry and DeRozan outstanding.

Two Biyombo free throws powered Toronto into a 106-86 lead with just under five minutes left, leaving no way back for Miami.

DeRozan said Toronto would be ready for the test posed by Cleveland.

“We tip our hats to the Toronto organization,” Spoelstra said.

“You have to respect an organization that has gone through some pain in the playoffs and then to be able to overcome that. It was a heck of a series to be involved with.

“It’s unfortunate that people thought that this was maybe not the most elegant series but it was one of the more competitive ones.” – Agence France-Presse