Home Football ‘He made us champions’ – Barcelona pays homage to Cruyff 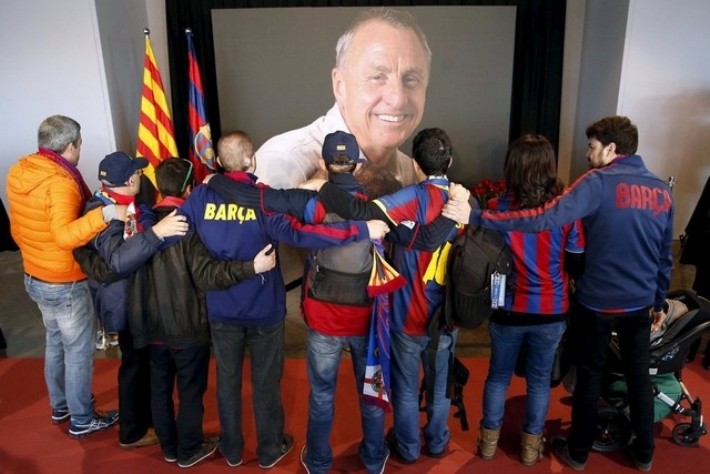 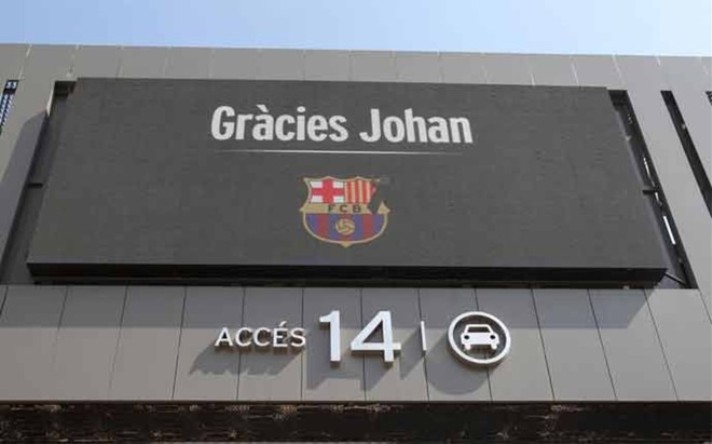 It was Johan Cruyff who “made us champions”, wept long-time Barcelona fan Jose Gilabert Cortina, a retired printer who joined the thousands of fans who came to the Camp Nou on Saturday to pay tribute to the Barca legend.

Dutchman Cruyff, who first moved to Barcelona from Ajax Amsterdam in 1973, died on Thursday in his adopted city aged 68 after a five-month battle with lung cancer.

“When he arrived as a player 43 years ago I came to all the matches for the sheer entertainment he provided,” recalled the bespectacled 69-year-old.

“We were a team of losers, it was 14 years since we’d won the Liga and he changed everything. You would have thought that football had been transformed into another sport,” he recalled with tears in his eyes like many of his generation who mixed with the international crowd including Spaniards, Chinese, Japanese and Moroccans who came to the special condolence area opened by the club at the Camp Nou.

The style and freedom with which the 1.80 metre athlete with blue eyes and a Beatles haircut played was a breath of fresh air during a time when Spanish dictator Franco was still in power.

“Franco was still in power and you couldn’t wear long hair at that time without being taken for a transvestite. Cruyff did it,” said Fidel.

“He was always inventing something,” recalled 70-year-old composer Franck Charles, particularly of Cruyff’s time as a coach from 1988 to 1996. “I remember a lovely phrase that he said to the players before they took to the pitch: ‘guys have fun’. And they had fun!”

“Today it’s Messi who resembles him the most. Like Cruyff said there’s no need to run a lot to control the game and Messi doesn’t run much.”

Suddenly, Fidel, the former taxi driver with grey hair, begins to laugh loudly as he recalls Cruyff’s legendary goal against Atletico Madrid in 1973 when the striker leapt into the air, twisting his body to score as he faced away from goal.

And it amuses him now to see top officials from Barcelona’s eternal rivals Real Madrid – such as president Florentino Perez – come to pay tribute to the player who “changed the face of football”, 43 years after Real’s humiliating 0-5 home loss.

When Cruyff arrived at Barcelona the team were second bottom in the league. But they won 17 games in a row to win their first La Liga title in 14 years.

The relationship between player, club and fans became even stronger after he took over as head coach in 1988.

In an eight-year spell in charge he won four consecutive league titles, and Barcelona’s first European Cup in 1992.

“He was a Dutchman more Catalan than a lot of Catalans,” recalled Franck, noting Cruyff’s insistence on naming his son Jordi (the patron saint of Catalonia), a regional name banned at the time by the Spanish administration.

“He supported the Catalans a lot in their battles,” Franck continued.

“Under Franco, Cruyff was the first to wear the armband bearing the colours of Catalonia as captain,” added Jose. “That he was pro independence or not, I don’t know, but he was clearly for a self-determination referendum for the Catalans to decide their future.”

On front of the cameras, the president of the region, the separatist Carles Puigdemont, praised Cruyff’s ability to “bet on the collective talent”. “On behalf of the country, thank you for all Catalans.” – Agence France-Presse