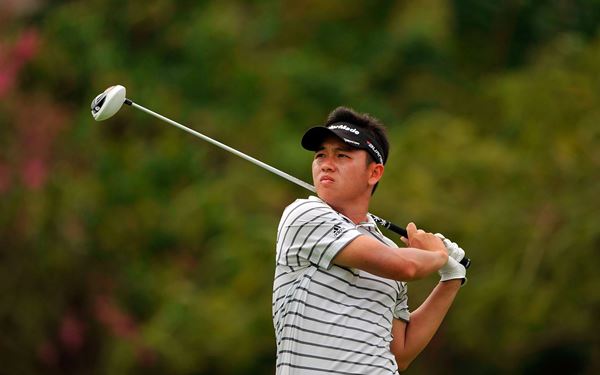 Malaysia’s Ben Leong signed for a flawless three-under-par 69 to share the second round clubhouse lead with compatriot R. Nachimuthu at the weather-disrupted PGM UMW Impian Championship on Thursday.

Play was suspended at 3.44pm local time due to lightning threat and abandoned for the day shortly after. A total of 44 players will return to the Impian Golf and Country Club at 7.30am on Friday to complete their second rounds. The third round will not start before 10.00am.

Leong nailed three birdies for a two-day total of eight-under-par 136 to match with Nachimuthu, who returned with a sizzling 66, at the RM200,000 (approximately US$60,000) ADT event.

The leading duo held a three-shot advantage over Chinese Taipei’s Chan Shih-chang (68), Pijit Petchkasem of Thailand (69) and American Casey O’Toole (71) who sit in third place on 139 at the PGM UMW Impian Championship, which is the penultimate tournament of the 2014 ADT season.

Thailand’s Sattaya Supupramai, who held a share of the overnight lead, and current Order of Merit leader Pavit Tangkamolprasert are amongst the players who have yet to complete their second rounds.

Leong, who sat out the entire 2013 season due to a back injury, regained confidence in his game following two commendable rounds at the PGM UMW Impian Championship.

“The back to back birdies after the turn made me believe in my round again, especially after shooting nine straight pars on the front nine. Today’s round was a test of my character and my patience. I missed a few putts which I shouldn’t have out there but this is golf,” said the 28-year-old Malaysian.

Leong, a one-time winner on the Asian Tour but not since 2008, had showed glimpses of his old form when he won a domestic tournament in August.

“I’m trying to get to a final score of 12-under-par this week. I will just play within myself. It’s a goal for me to achieve. I haven’t been playing for a month and I’ve been struggling with my putting after the win. My goal was to win once this year and I have already done it. A second win would be a bonus but I am not thinking a lot about it right now,” added Leong.

Nachimuthu, winner of the Professional Golf of Malaysia (PGM) Tour’s Order of Merit in 2011, is delighted to soar into the lead after marking his card with one eagle and five birdies against a lone bogey.

“I got off to a great start from the 10th with three birdies in four holes. I had a pretty solid round today. I hit the ball good and I putted well too. I will keep to the same game plan for the next two rounds and we will see how it goes,” said the local stalwart, who sank a 10-foot putt for eagle on the third hole.