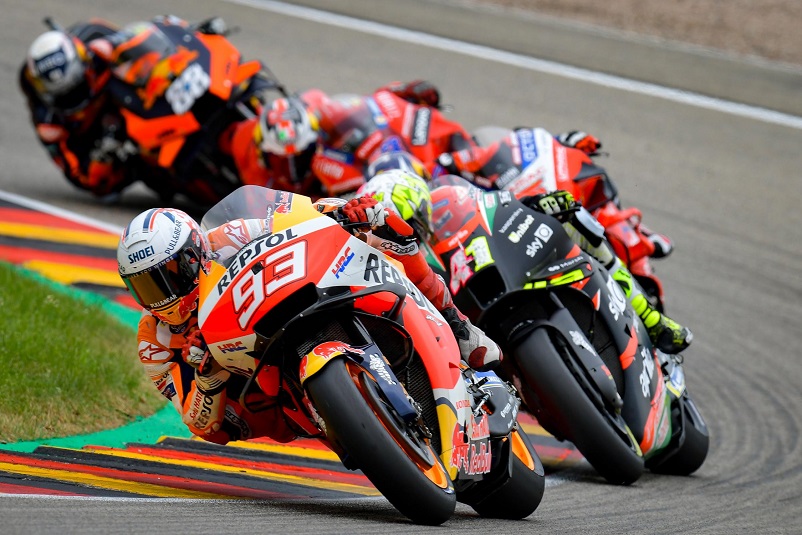 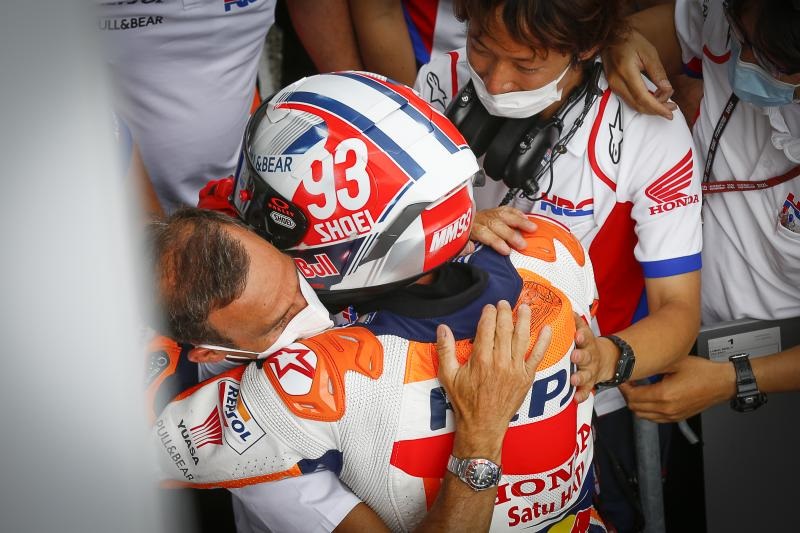 581 days of waiting for his next victory are over, Marc Marquez is back on top of the rostrum!

The Liqui Moly Motorrad Grand Prix Deutschland was a thrilling encounter right from the start, with a rain threat looming large over the Sachsenring. In one of the most emotional Grand Prix in recent years, it would be one of the most sensational comeback stories in sport as the King of the Ring Marc Marquez (Repsol Honda Team) took victory after 581 days since his last, with a topsy-turvy race right from the start. Miguel Oliveira (Red Bull KTM Factory Racing) fought his way through to challenge Marquez but had to settle for second, whilst Championship leader Fabio Quartararo (Monster Energy Yamaha MotoGP) took a solid and crucial third.

In what was an electric start, it was Aleix Espargaro (Aprilia Racing Team Gresini) who blasted into the lead to grab the holeshot, whilst Marc Marquez started pushing Fabio Quartararo out wide for second, leaving the Frenchman down in fourth behind pole-man Johann Zarco (Pramac Racing). Into Turn 13 for the final time and Marquez made his move for the lead, passing Espargaro and leading over the line. The two would trade places at Turns 12 and 13 on a couple of occasions in the coming laps, whilst Jack Miller (Ducati Lenovo Team) would make his way through on Quartararo at Turn 1.

Further down the field, it was a disaster for Danilo Petrucci (Tech 3 KTM Factory Racing) and Alex Marquez (LCR Honda Castrol) as both crashed together at Turn 1 on Lap 4. They would soon be joined though in a list of retirees as Lorenzo Savadori (Aprilia Racing Gresini Team) suffered a fast Turn 10 crash as his front-end washed out. All three riders were able to get up and walk away, making it back to the pits.

On Lap 9, the white flag was waved, along with the white flag with the red cross, indicating that it was raining and that if the riders wanted to, they could come into the pits and change bikes and thus tyres. At this moment, Marquez began to pull out a gap to the opposition as risked everything to put time into the chasing pack, headed by Aleix Espargaro, although the Aprilia rider was acting as a cork in the bottle as the opposition queued up behind him whilst Marquez leapt away at the front. However, soon enough, Miller and then Miguel Oliveira (Red Bull KTM Factory Racing) would come on through, with Oliveira now on fire as he picked his way through the pack, including pole-sitter Zarco and Aleix Espargaro.

Oliveira then made his move for second on Miller, and now set his sights on Marc Marquez out front, with the gap constantly hovering around 1.8s, although with ten laps to go, it was now coming down through the one second bracket. Further back, it was now Fabio Quartararo who had picked his way through into third, but another man on the move was Brad Binder (Red Bull KTM Factory Racing), as he carved his way into contention by getting ahead of Zarco, then Aleix Espargaro and then Jack Miller with just four laps to go.

Meanwhile, in the battle for the lead, it had briefly come under one second but in the final three laps, Marquez broke Oliveira’s will and pushed the gap back to over one and a half seconds, and now, he was in full flow, riding like he’d never been away as he went to end a 581 day wait for victory at a circuit he had been undefeated at since his graduation to MotoGP™ in 2013, and even before that, winning everything he’d competed at in Germany in 2010. Further behind, it was now a battle over fifth between the factory Ducati teammates of Miller and Francesco Bagnaia (Ducati Lenovo Team), with the Italian storming through the field in the latter third of the race. At Turn 9, Bagnaia made his move on the final lap, demoting Miller to sixth.

Despite the action behind, the emotions were only just beginning as one of sport’s greatest comebacks was about to be completed. After all of the hard work to be fit again, to get back racing and to go in pursuit of more MotoGP™ success, Marc Marquez’s comeback to the top had been complete and the wait was over. Across the line, Marquez took his first victory since Valencia in 2019 to finally stand on not just the podium again, but to stand on the top step. It was a valiant effort from Miguel Oliveira, who took a stunning second, his third consecutive top-two result, whilst third place went to Fabio Quartararo, who fought back to extend his Championship lead to 22 points over Johann Zarco. Brad Binder took fourth ahead of Bagnaia, Miller and Aleix Espargaro.