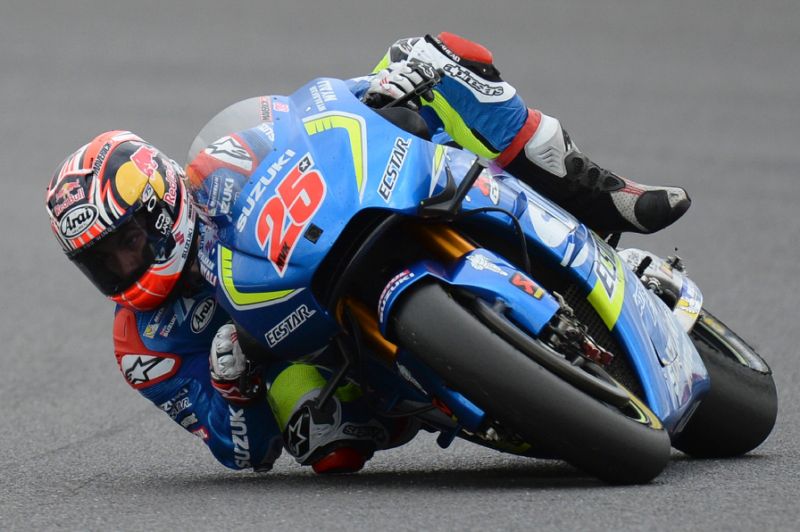 Spaniard Maverick Vinales (main pix) rode a masterful race to secure his first ever MotoGP victory, easing to take the chequered flag in the British Grand Prix at Silverstone on Sunday.

The 21-year-old — the 2013 Moto3 world champion — gave Suzuki its first win in the British edition in this category since American Kevin Schwantz in 1994.

It was their first in the category overall since Chris Vermeulen triumphed in France in 2007.

Vinales led home Honda’s Cal Crutchlow — the first Briton since Barry Sheene in 1977 to take pole — with legendary Italian Valentino Rossi third on his Yamaha for his 217th podium placing.

Rossi marginally reduced Marc Marquez’s lead in the overall standings, the Spaniard holding a 50-point advantage over the Italian, 210 points to 160.

The race had to be reduced to 19 laps after it was halted following a brutal first-lap collision between French rider Loris Baz and Pol Espargaro of Spain.

Baz, on a Ducati, and Espargaro on a Yamaha Tech3 were at the back of the field but debris from their bikes littered the corner and the track.

Once the race got underway for a second time, Vinales made a superb start on his Suzuki to lead from Marquez with Crutchlow in third and Rossi fourth.

Rossi produced a supreme passing movement with 14 laps to the chequered flag, relegating Marquez to third.

Vinales was well clear of the pack and maintained his advantage of 2.5sec despite Rossi’s best efforts.

Marquez lost further ground as Crutchlow and Andrea Iannone passed him in quick succession with the latter then overtaking the Englishman and Rossi to move into second with eight laps remaining.

Rossi fought back to take second again as an engrossing tussle took place for the minor placings with six riders involved.

Iannone dramatically fell out of that equation when he came to grief with five laps to go while Marquez’s overzealous attempt to pass Rossi saw him exit off the track but return just behind the Italian.

Crutchlow was now the lead pursuer of Vinales with Rossi and Marquez conducting their private duel behind him — the Spaniard going past him with four circuits of the track to cover.

Crutchlow staved off a stern challenge by Marquez for second spot in the closing stages and the latter also had to concede third place to Rossi. – Agence France-Presse