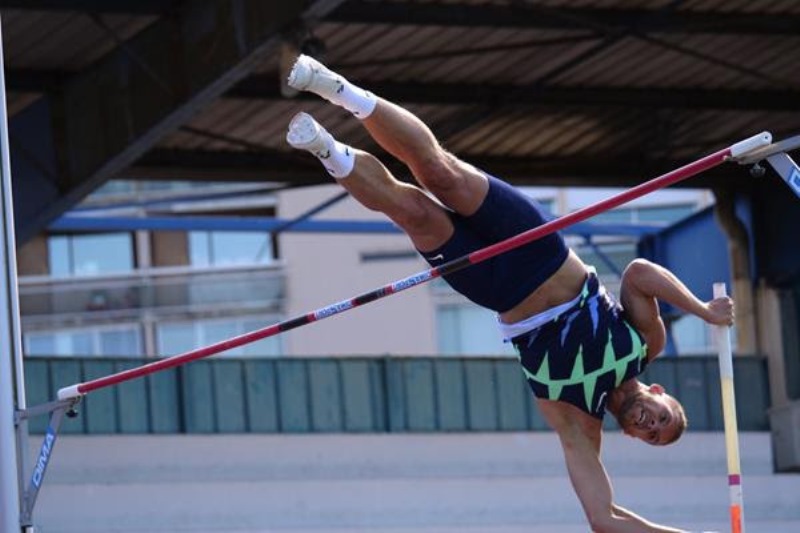 Kevin Mayer produced a dominant victory in the Ultimate Garden Clash – Combined Events edition on Sunday (7), a unique triathlon competition that brought together three of the world’s best decathletes competing in three countries on two continents.

Competing in Montpellier, France, Mayer, the decathlon world record-holder, took on world champion Niklas Kaul of Germany and world silver medallist Maicel Uibo of Estonia, who were competing from their training bases in Mainz, Germany, and Clermont, Florida, respectively.

The grueling contest began with a pole vault competition where the trio set out to clear 4.00m as many times as possible during a 10-minute period. Action then continued in the shot put ring where the challenge was to produce as many 12-metre throws as possible, again over the span of 10 minutes. It then concluded with a shuttle run competition in which two cones were placed 20 metres apart, with the athletes collecting points for each completed back-and-forth lap over the course of five minutes.

Despite a late start – the Frenchman was on the sidelines with a bottle of water as the other two began their initial run-ups – Mayer ate up that 25-second deficit quickly as he settled into his vaulting rhythm to take control midway through the first session. Mayer, who has a 5.45m personal best, nailed a 17th clearance just as time wound down, two better than Uibo. Kaul ended the round third with 14.

With a personal best nearly two metres better than those of his competitors, Mayer took firm command during the shot put, quickly falling into a rhythm that proved unstoppable. Taking just 20 to 22 seconds between efforts, Mayer produced 28 throws that sailed well beyong the 12-metre line to Kaul’s 22. Further back, Uibo tallied 20.

That put Mayer in the proverbial driver’s seat with 45 points and a nine-point lead over Kaul, who in turn was one ahead of Uibo.

Despite that comfortable cushion, Mayer’s momentum continued over the five-minute final event. The trio ran fairly even for the first four minutes until Kaul, the fastest 1500m of the three, took a narrow lead. He held it to win the round with 27 circuits, one better than Mayer and Uibo. Mayer collected 71 points to seal the win. Kaul totaled 63 with Uibo another two back.

Mayer said he didn’t know what to expect from the competition so he didn’t really do much, if any, planning. He simply wanted to have a bit of fun and enjoy the feeling of a competitive atmosphere again.

“It was a little stressful since I knew I had great competitors out there,” Mayer said, adding that the key to his win came in the shot put.

“In the shot put I think I made the difference because my PB is 17 (metres) so it was easy for me to throw 13 every time and I got in a rhythm that felt good. I was really really tired at the end but it was a good effort for me.

Kaul, who competed in an indoor facility, said he woke up feeling a little nervous knowing that he was returning to competition today.

“I was really happy that I could compete with the other guys because we haven’t been able to do that for the last three or four months.”

Uibo, who also faced 30 degree temperatures and high humidity, also enjoyed the competitive spirit, even if it was from a long distance.

“Obviously none of us had done something like this before, but it was a great thing to be able to come out on a Sunday and have a bit of fun.”

World Athletics President Sebastian Coe said: “I am in total awe of these three athletes and be under no illusion – that was a lot tougher than they made it look. It was also great to have two legends of the decathlon sharing their insights. And just how good were those insights? My heartfelt thanks to all involved in bringing another Ultimate Garden Clash edition to our fans around the world.”