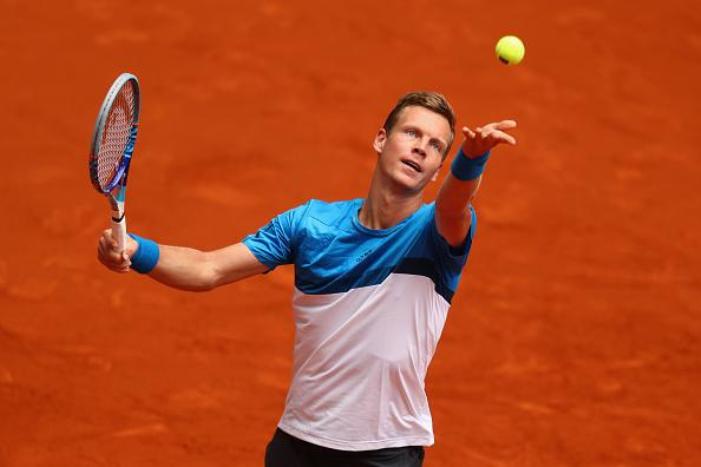 Murray didn’t even face a break point for the second consecutive match as he adjusted to the indoor conditions caused by the unusually inclement weather in the Spanish capital to extend his winning record over Berdych to 8-6.

“There were different conditions playing under the roof, I adjusted to them well and that was the most pleasing thing for me,” said Murray.

“I’ve only played three or four indoor clay matches in my life, so they weren’t easy conditions against a tough opponent.”

A fast start put Murray in control as he broke the Berdych serve at the first time of asking to lead 3-0 before serving out for the set.

And the Scot’s mixture of deep hitting, slices and drop shots caught the Czech even more off guard in the second set as he won the last five games to seal victory in just over an hour.

The two-time Grand Slam champion could face a resurgent Rafael Nadal in Saturday’s semi-finals in a repeat of last year’s final should the Spaniard overcome Joao Sousa later on Friday.

Murray beat Nadal on clay for the first time in his career to claim his first Masters title on the surface in 2015.

However, Nadal has looked more like his old self in recent weeks with tournament victories in Barcelona and Monte Carlo, where he beat Murray in the semis.

“You have to learn from every match that you play against the best players. When you get to the semis or finals you want to go onto the court with a very clear game plan and understanding of the things that work against them.

“If he wins I need to learn from the match I played against him in last year’s final and put in a good performance again tomorrow.

“A lot depends on the conditions. It is pretty different to Monte Carlo, it is supposed to rain here the next few days and playing indoors changes things.”

World number one Novak Djokovic is also in action later on Friday as he faces big-serving Canadian Milos Raonic.

Dominika Cibulkova booked her place in the final of the women’s Madrid Open as she routed American qualifier Louisa Chirico 6-1, 6-1.

Chirico was making her first appearance in a WTA semi-final and nerves seemed to get the better of the world number 130 as Cibulkova roared into a 5-0 lead.

The Slovakian was just as dominant in the second set as she won the last five games to set up a final meeting on Saturday with sixth seed Simona Halep or Australian Sam Stosur. – Agence France-Presse