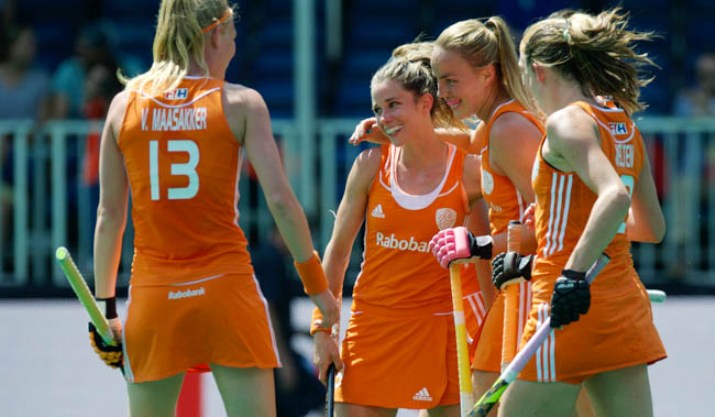 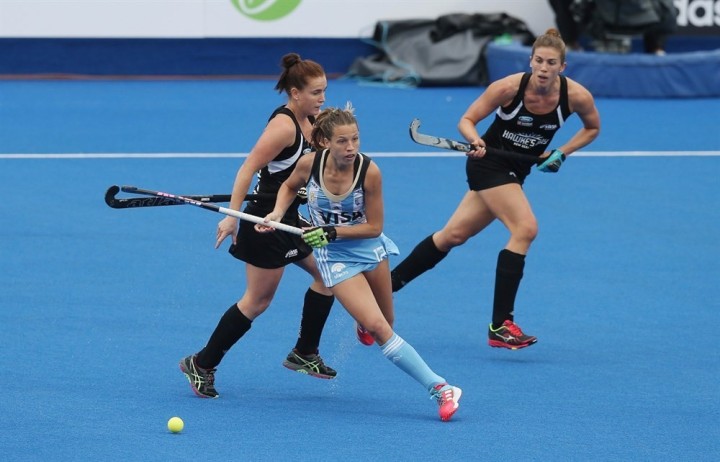 On day four of the Women’s Hockey Champions Trophy 2016 in London, the Netherlands and Argentina both recorded victories to seal their places in Sunday’s showpiece final with one match of the pool phase remaining.
Reigning Olympic champions the Netherlands celebrated Olympic Day with a 2-1 win over Australia’s Hockeyroos to claim their fourth successive win at the event being played at the Lee Valley Hockey and Tennis Centre Olympic legacy facility.
The Netherlands’ victory was also good news for Argentina – who were 4-2 winners against New Zealand thanks to a double strike from Carla Rebecchi – as they now cannot be caught by third placed Australia and will therefore meet the Dutch in the gold medal match.
The two teams will also meet in their final pool match on Saturday, ensuring that the fans in London will be treated to not one but two potentially thrilling encounters between the top ranked teams in world hockey.
Although the finalist are known, the race for the bronze medal game is very much alive. Australia and New Zealand currently sit in the third and fourth positions in the pool, but fifth-placed New Zealand and sixth-placed Great Britain are still mathematically capable of overhauling the teams above them.
Match 10: Argentina 4, New Zealand 2
Las Leonas captain Carla Rebecchi continued her remarkable form at the event by scoring twice to help Argentina to victory over New Zealand’s Black Sticks in Thursday’s opening match.
Florencia Habif opened the scoring for Argentina with a first quarter penalty corner before in-form attacker Rebecchi scored field goals either side of half time. Although Sophie Cocks pulled a goal back for New Zealand, Maria Granatto – another player who has been outstanding throughout this event – made the score 4-1 early in the fourth quarter before New Zealand’s Olivia Merry completed the scoring.
I’m really happy because we really wanted to win this game”, said Rebecchi after the match. “We knew that it was very important if we wanted to reach the final and I think we played a good game, creating lots of scoring situations. Maybe we could have scored some more and maybe we can defend a little bit better because every time they entered the circle they got something, so I think that we still have things to improve.”
Match 11: Australia 1, Netherlands 2
The Netherlands sealed their place in Sunday’s final by defeating Australia in the second match of the day.
A field goal from Michelle van der Pols gave the Netherlands a sixth minute lead before team captain Maartje Paumen doubled the advantage with her sixth penalty corner goal in just four matches. Kathryn Slattery was on target for the Hockeyroos, who were hugely competitive throughout.
“We played well, but there is always room for improvement”, said Netherlands star Lidewij Welten. “Our aim is to get better with each game, that is our group mentality. It is good for us to play Australia in a tournament like the Champions Trophy because we don’t get to play them so often. They didn’t surprise us today as we know they want to be fast and attacking, although today neither of us could play our true games.”
Australia captain Madonna Blyth said: “We played pretty well for parts of that game. We created good opportunities and put the Dutch under a lot of pressure. There are still a lot of things that we can improve upon, but we are  strong as a unit and I am happy with the way we are going.”
Match 12: Great Britain 0, United States 2
USA claimed their first win of the competition with a 2-0 triumph over host nation Great Britain in the final match of day four at the Lee Valley Hockey and Tennis Centre.
The result moved USA up to fourth place in the standings, keeping alive their hopes of medalling at this event. Great Britain are still mathematically capable of qualifying for the bronze medal game, but need a convincing win against Australia in their meeting on Saturday if they are to achieve that goal.
Both of USA’s goals arrived in the third quarter of the match, with Emily Wold scoring from open play in the 39th minute before Kathleen Sharkey added a second two minutes later with a penalty corner.
“We knew that they were going to battle for the entire 60 minutes and we knew that it was going to take everything that we had”, said USA’s Katie Bam after the match. “We had to be constantly on our game defensively and also taking care of things on the attacking side and we did that today.”
Tickets for the women’s Hockey Champions Trophy 2016 are still available and can be purchased by clicking here.