Home 2019 Nirun pips Green in play-off to win his first ADT title in... 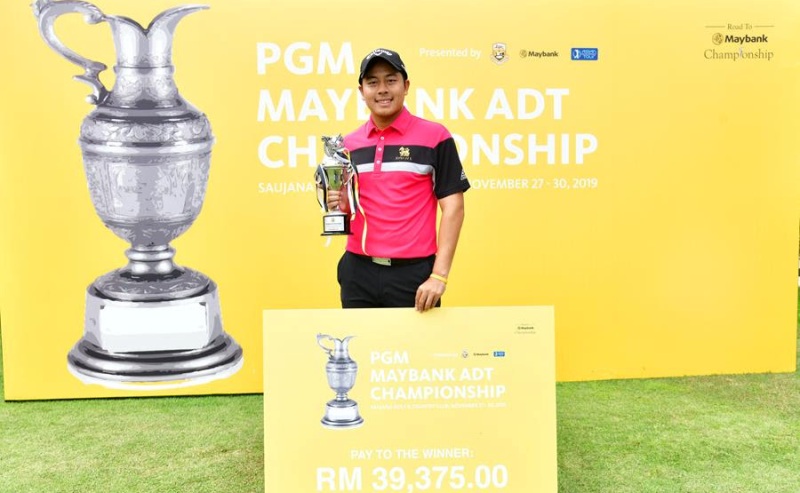 Nirun and Green both staged a remarkable comeback from six and eight shots back at the start of the day to end regulation play tied on 15-under-par 273 after posting final rounds of six-under-par 66 and 64 respectively at the Saujana Golf and Country Club.

While Green impressed with his flawless round that contained eight birdies to claim the clubhouse lead, it was Nirun who made heads turn when he eagled just when it mattered most, on the 18th, to overturn a two-shot deficit and force  extra-time.

The duo returned to the par-five 18th hole for the play-off battle where Nirun pipped Green with a par against a bogey to triumph at the US$54,000 event.

Thai overnight leader Atiruj Winaicharoenchai failed to convert his commanding four-shot advantage into victory after battling to a 74 to finish sole third on 275, while Amir Nazrin finished one shot further back after closing with a 71.

Nirun admitted that he was left in disbelief when he eagled the last hole.

“I knew it was going to be tough to overtake Gavin, who was two shots clear at the top. For the last hole, I was just trying to finish with a flourish by aiming for a birdie.

“I hit my shot to about 75 yards and tried to chip onto the green. I didn’t think it would go in!

“I didn’t notice it went in as the pin was behind the hill. I only realised I made the eagle when I heard the loud cheers and fellow players came to congratulate me as I approached the green.

“But the eagle on the 18th really set me up well for the extra hole. Gavin would have a great advantage as he’s capable of hitting it real far. I just focused on my game, put the ball on the fairway, and then the third shot to the green.

“I two-putted for the win after Gavin failed in his chip-in attempt and missed the putt as well,” said Nirun, who pocketed US$9,529 to move from 51st to 19th on the Order of Merit.

Having collected US$14,842 from nine starts, Nirun has set his sights on claiming a big share of the season-ending US$160,000 Taifong Open in Chinese Taipei next month to make his last-ditch bid to crack into the top-seven.

“The victory has opened up the opportunity for me to try sneak into the top seven.. The Taifong Open is a big money event and I can still earn my Asian Tour card if I could finish top three there.

“Winning my first ADT title in four years has restored my confidence and ambition,” he said.

Maybank ambassador Green was meanwhile philosophical in his defeat.

“I’m disappointed in the playoff of course but I had a good final round. Putts went in and I hit it great to make 17 out 18 greens, I would say it’s still a solid week.

“I have been working really hard on some stuff with the swing and I’m liking the way I’m striking it. It’s a great preparations for the next year’s Maybank Championship, that’s for sure,” said Green.

Order of Merit leader Naoki Sekito of Japan could only manage to finish tied 30th but it was good enough for him to keep himself at the top on US$50,278, giving him a US$21,000 cushion over second-placed Pannakorn Uthaipas of Thailand (US$29,794).

But with the Taifong Open offering a top prize worth US$28,000, as many as six contenders including seventh-placed Kosuke Hamamoto of Japan (US$22,449) can still topple Sekito to become the ADT number one.