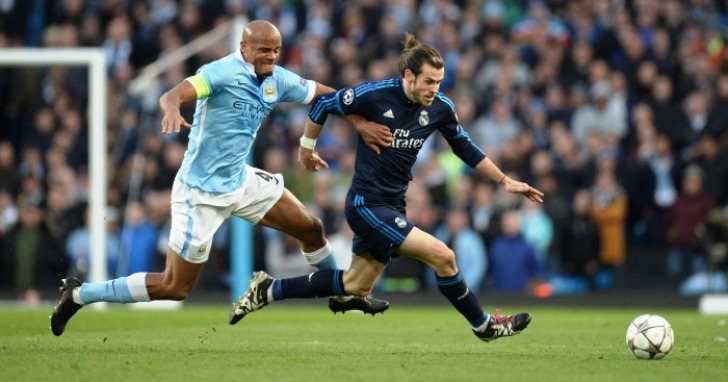 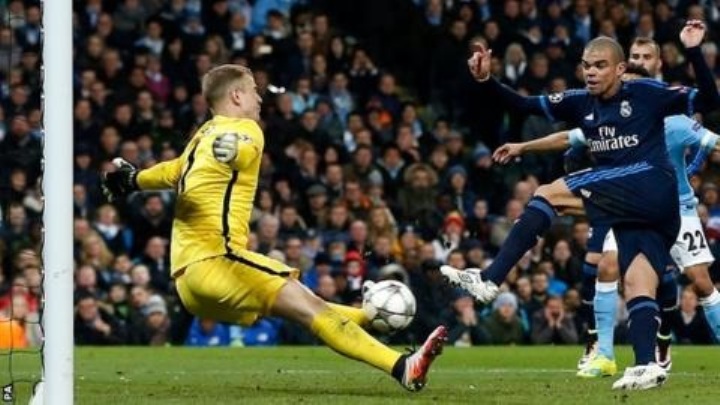 Champions League top-scorer Cristiano Ronaldo was a frustrated spectator as his Real Madrid side played out a slow-burning 0-0 draw at Manchester City in Tuesday’s semi-final first leg.

Injury prevented the Portuguese superstar from adding to his 16-goal tally and in his absence the visitors were unable to convert the handful of chances they created, with a sensational late Joe Hart save to deny Pepe the closest either side came to a goal at the Etihad Stadium.

As an occasion, City’s first semi-final appearance in the competition was a let-down, but by preventing Madrid from notching an away goal the tie’s underdogs safeguarded their hopes of reaching the final ahead of next week’s return leg at the Bernabeu.

“This season we have played very well away. Now we go to the Bernabeu with the same attitude as playing at home.

“Real Madrid must attack a little bit more. You cannot take too much from the first leg. We can see from the second leg who will go through.”

Pellegrini, though, will be without David Silva for the second leg after he was forced off by a hamstring injury, while his Madrid counterpart Zinedine Zidane was left sweating on the fitness of Ronaldo and Karim Benzema, who went off at half-time.

“I’m happy with the game,” said Zidane, who expressed hope that both his ailing forwards will be fit for the return leg.

“We had the ball more in the second half, had a couple of chances. We’re a little bit disappointed, because we possibly deserved more.

City’s semi-final arrival was an event seven and a half years in the making for the club’s Emirati owners and there was a carefully stage-managed attempt to generate an atmosphere prior to kick-off, with fans given blue and silver foil flags and a flurry of streamers greeting the teams.

The star attraction, alas, was on the bench, glowering in a grey Real Madrid anorak. Ronaldo took his place among the visiting officials after failing a pre-match fitness test on a thigh strain.

City seemed determine not to let their guests settle into a rhythm and with Fernandinho setting the tempo for their pressing, they did exactly that.

But with neither side able to create any chances, the most notable act of the first half was the departure of Silva after he injured himself in a sliding challenge on Gareth Bale that earned him a booking, which saw 19-year-old Nigerian forward Kelechi Iheanacho join the fray.

Benzema, a pre-match doubt with a knee problem, was replaced at half-time by Jese and despite the touchline exhortations of Zidane, who split his trousers for the second Champions League match running, his side could not make the breakthrough.

When they belatedly hit the target, Sergio Ramos hanging in the air to meet Toni Kroos’s corner from the right with a firm header, Hart saved comfortably.

And when they conspired to beat Hart, Jese looping a header towards goal from Dani Carvajal’s right-wing cross, the crossbar came to the England international’s rescue.

City started the second half with a left-foot sighter from Sergio Aguero that whistled over the bar, but they did not threaten again until a stoppage-time Kevin De Bruyne free-kick that Keylor Navas tipped over.

In the minutes prior to that, the visitors had started to knock on the door.

After Bale had given City a scare by curling narrowly wide from the edge of the box, Hart produced two demonstrations of the razor-sharp reflexes that have come to his side’s rescue so many times on big European nights.

First, he stuck out his left boot to deflect away a downward header from Casemiro and moments later a starfish-style block prevented Pepe from snatching a late winner from point-blank range. – Agence France-Presse