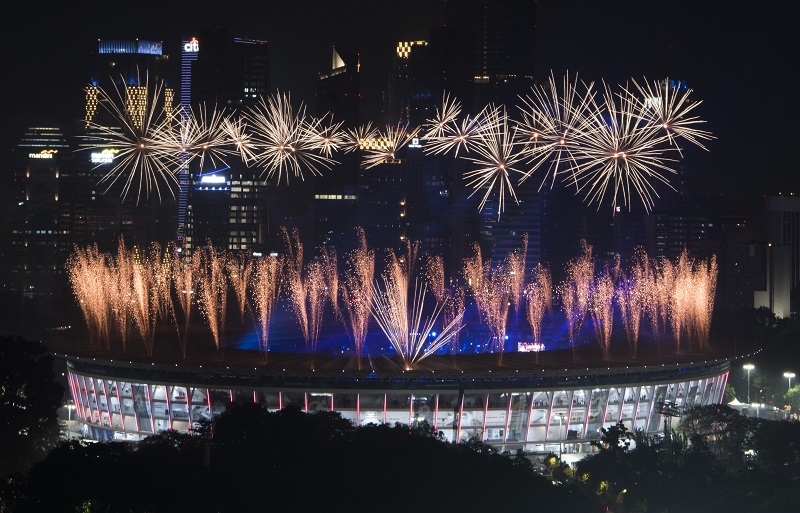 The 18th Asian Games closed in a glittering ceremony in Jakarta on Sunday as hosts Indonesia dreamed of stepping up to host the Olympics in 2032.

Thousands of athletes in ponchos marched in heavy rain at the Gelora Bung Karno stadium at the close of a two-week tournament featuring 40 sports.

“You did it! You made the energy of Asia come through… Jakarta has the capability to host any such major international event,” he added.

Indonesia has defied expectations to host a smooth Games, which with 17,000 athletes and officials is second in size only to the Olympics.

Riding high on the Games’ success, President Joko Widodo has announced a bid to hold the 2032 Olympics — which would have seemed unthinkable just a few weeks ago.

The president addressed the ceremony by video link from an emergency shelter in Lombok, where a string of earthquakes in recent weeks killed 555 people.

“This (Games) is the energy of Asia united to make a difference to the world,” he said.

Olympics chief Thomas Bach has welcomed Indonesia’s bid but he warned the sprawling Southeast Asian country needed to maintain the positive energy generated by the Games.

“I think what is important now for Indonesia is to keep the momentum of this Games,” he said. “So for you now not to fall into a black hole the moment after everybody has left.”

China topped the medals table for the 10th Games in succession, a streak stretching back to New Delhi 1982, with a runaway 132 golds.

They will now look to make a deafening statement by repeating the feat at the 2020 Olympics in Tokyo, capital of their war-time colonisers and bitter rivals Japan.

Japan, who won the Games’ 465th and final gold medal in Sunday’s mixed team triathlon, placed a distant second with 75 golds, while South Korea had 49 and hosts Indonesia finished with 31.

Japanese swimmer Rikako Ikee, who became the first woman to six gold medals at a single Games, was named the best athlete or Most Valuable Player.

“I still haven’t won a world title so that’s my next goal,” she said after a small awards ceremony on Sunday.

The 18-year-old, who looks set to be the face of the Tokyo 2020 Games, stole the limelight at the pool from China’s triple Olympic champion Sun Yang and Singaporean butterfly hero Joseph Schooling.

Premier League star Son Heung-min’s joyous celebration at winning football gold, a title that earned him an exemption from South Korea’s military service, will live long in the memory.

Tobacco and banking billionaire Michael Bambang Hartono, one of Indonesia’s richest men, was the Games oldest medallist at 78, in the card game bridge.

He is 66 years older than 12-year-old Indonesian skateboarder Bunga Nyimas, whose bronze medal in the street event made her the youngest athlete to mount a podium.

They were part of a bumper Games for Indonesia, whose 31 golds was a record for a Southeast Asian country and who, more importantly, proved the critics wrong by hosting a successful tournament.

Despite concerns over air pollution, traffic and a pre-Games police crackdown that killed dozens, the venues were ready on time and most events went off smoothly.

It came after the 2011 Southeast Asian Games in Indonesia were plagued by corruption and delays — and may have put the country in line to host the biggest tournament of all, the Olympics. – Agence France-Presse