Home News Others Organisers Of Sports Meets Must Not Hope For Aid From KBS –... 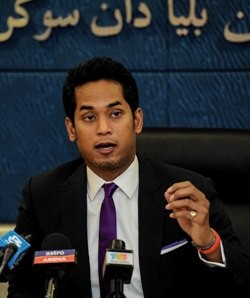 Organisers of sports meets must be independent and not expect the government to bail out their programmes if they encounter problems, said Youth and Sports (KBS) Minister Khairy Jamaluddin.

He was commenting on running of the oldest cycling race in the country, the Tour of Malaysia, which was almost cancelled due to financial constraints.

“The organiser of the Tour Of Malaysia made an appeal to KBS but from the outset we had informed them we had no allocation to help the programme.

“It is the responsibility of the Malaysian National Cycling Federation to make the Tour Of Malaysia a success but I understand they also have financial problems,” he told reporters after witnessing the final of the Supermokh Cup at the Malaysian Sport Council (MSN) here, Sunday.

Khairy said he did not want organisers to get into the habit of seeking aid from KBS when failing to organise a championship.

He said KBS had a list in its financial planning every year for championships but the organisers had to find their own sponsorship if the funds given were inadequate.

The Tour Of Malaysia, which received the 2.2 recognition from the Union Cycliste Internationale, almost could not be continued at the fifth stage of the race and the original distance of 86.6 km had to be shortened to 47 km.

For the record, a similar incident had taken place in the history of the organisation of Tour of Malaysia prior to this, due to financial problem when the event was held in 2003. – BERNAMA