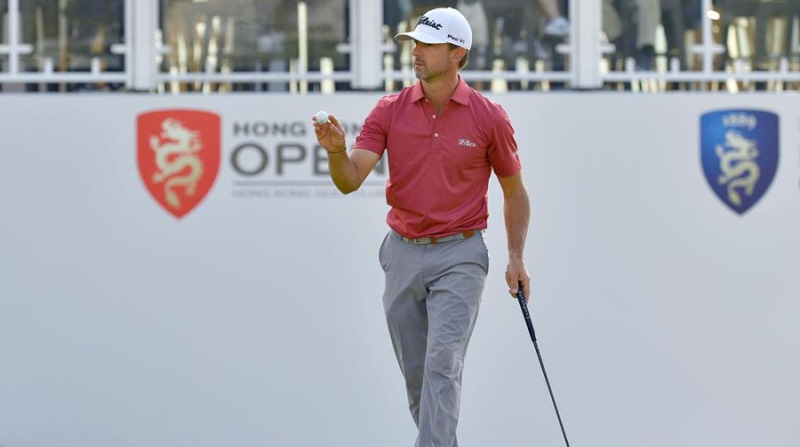 Australia’s Wade Ormsby remained as the player to catch after he signed for a four-under-par 66 to head into the final round of the Hong Kong Open with a two-shot cushion on Saturday.

Ormsby has held the lead since the opening day and never looked likely to relinquish his place atop the leaderboard after soaring ahead with an eagle, three birdies and a long bogey for a three-day total of 13-under-par 197.

Thailand’s Gunn Charoenkul displayed his consistency again at the Hong Kong Golf Club by signing for a 65 to trail the 2017 Hong Kong Open champion in outright second place at the Asian Tour’s season-opening event.

While Gunn has yet to make his breakthrough on the Asian Tour, he has racked up 19 top-10s across all Tours in 2019 and the father-to-be showed he could be on the verge breaking into the winner’s circle this week.

A fit-again Rashid Khan of India returned to full fitness as he made his move with a splendid 63 to share third place with Australia’s Terry Pilkadaris, Korea’s Taewoo Kim and Thailand’s Jazz Janewattananond, who is the reigning Asian Tour Order of Merit champion.

Wade Ormsby (Aus) Third round 66 (-4) Total 197 (-13)
The game feels pretty good. I probably struck it the best I have all week early today. Being in front everyone’s chasing you, but I kept the mistakes off the card on the back side there. So, I’m in a pretty good position. There’s no point in getting too up or too down, I’m just trying to keep going doing my thing. Whether it’s an eagle or a birdie, I’m trying to do the same when I make a bogey. I feel like I’m is good spot mentally, so I just keep on working on that. I’m just going to keep doing what I’m doing, there’s no reason to change what I’m doing. Obviously, people are going to chase me. I’m not going to play conservative, I’ll play the golf course exactly the same way I played it for 10-15 years and let them come at me. And if they do, they do, I’m just going to keep doing my thing. Of course I like the course, my game is hitting the ball quite straight and scrambling quite well you know. I’m actually hitting my irons really good this week. I’m hitting a lot of greens in regulation so I’m not really having to use the scrambling part of it too much. It is a good golf course and you know I’m not a massively powerful player, so I just have to play to my strengths and this golf course does fit my strengths.

Gunn Charoenkul (Tha) Third round 65 (-5) Total 199 (-11)
I’m really thrilled. I got off to a good start today, but most of the time I got off to a good start, then it didn’t end well. So, I was just telling myself just to be patient out there, but fortunately today I got away with a lot of shots. There were a lot of shots where I duffed it, and then it just went straight to the pin. I just tried to stay calm out there with a straight face. But you know there was too much out there that I got away with, like I’m on number 14 which inches away from falling off the green. It would have been a different story. Like on 18, I hit a bad shot on my second, it was really bad, but I got away with it, it was just off the green again. And early on the front nine, I think I duffed four or five shots at number. I duffed on number 10 as well, I duffed on number eight. On the par three I duffed it and it went straight at the pin and I made birdie.  Just really lucky today to be in contention again. I would rather be very consistent throughout the year, rather than win and then not perform well at all. So, I’m just going to stick to my game and then when it’s time it’s going to come.

Terry Pilkadaris (Aus) Third round 64 (-6) Total 201 (-9)
It was a good back nine from the ninth hole onwards. I got a good birdie there and just got the momentum going again. Australians have done really well here in the past and hopefully I can follow in their footsteps. You can’t overpower the Hong Kong Golf Club, it’s tight so you got to be accurate off the tee. And there’s a lot of mid to short irons, so it’s a matter of just capitalizing on it, putting the ball in play and then giving yourself a chance. Tomorrow I’ll just go out and play and what will be will be. You can’t control what everyone else does, I’ll just control what I do. And if it goes my way it goes my way.

Rashid Khan (Ind) Third round 63 (-7), Total 201 (-9)
It was the same thing for me the first two days too. I was hitting it really well and I hitting it close also but didn’t really hole any putts. Today, I hit the ball bad but still getting good result. That was pretty good I thought. I was amazed when I finished around. I made a lot of birdies and I holed some really good putts. Made some good up and downs on holes where I got really stuck with. It’s that situation where I had to keep my momentum going. I have given myself a chance to go for the title now. I have one more round to go so let’s see. I hope to finish well. I have no expectations to be honest. When I played the last tournament, I wasn’t hitting it good and didn’t do well scoring wise. I was too tired from playing so many tournaments last year, especially at the end of the year. I had only like one week off. I came to this week on Tuesday feeling sick as well. So I wasn’t expecting to be in contention. I got better now and I told myself that I have played the course before and I should try my best to play well. Luckily, I did and I’m scoring well.