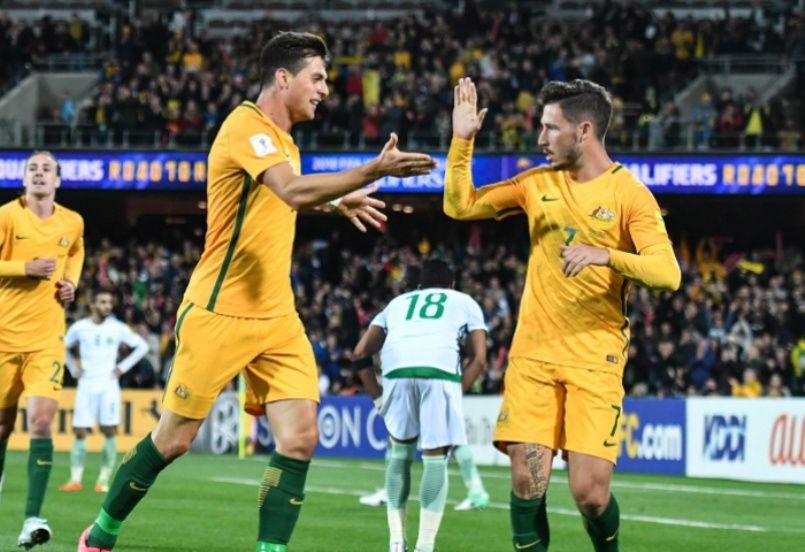 Australia edged a five-goal thriller against Saudi Arabia on Thursday as Ange Postecoglou’s Socceroos pulled themselves back into contention for an automatic berth at the FIFA World Cup finals in Russia next year.

Tom Rogic fired a blistering effort into the top corner 64 minutes into the second-half to give Australia a win that moves them level on points with the Saudis, who hold on to second place in Group B on goal difference despite the loss. Japan, who play Iraq on Tuesday lead the standings.

Tomi Juric twice gave the home side the lead in the first-half, capitalising on goalkeeper Yasser Al Mosailem’s mistake to put Australia ahead after just seven minutes before Salem Al Dawsari used his pace to latch on to Mohammad Al Sahlawi’s return pass to level the scores 16 minutes later.

Juric’s second in the 36th minute – a header from close range – was cancelled out by a fine team effort on the stroke of half-time when Al Sahlawi struck from eight yards out after Taiseer Al Jassam had nodded Mohammad Al Burayk’s sweeping ball from the right into the Al Nassr forward’s path.

Rogic, though, claimed the decisive third for Australia 18 minutes into the second-half when the Saudi defence gave the Celtic midfielder time and space on the edge of the area to drive his shot into the top corner of Al Mosailem’s goal.