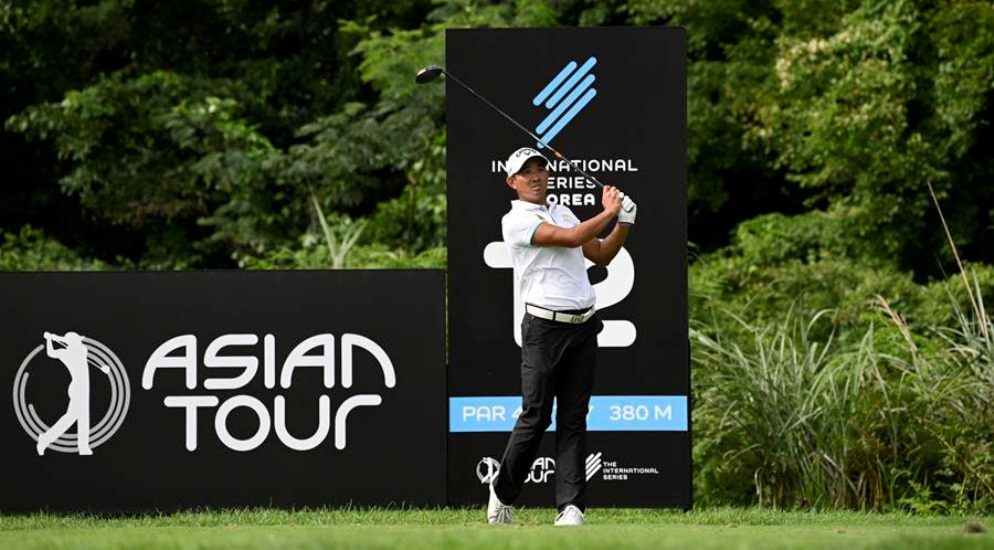 Thailand’s Pavit Tangkamolprasert is famous for winning a record seven titles on the Asian Development Tour but today he was in seventh heaven on the Asian Tour after sensationally making seven birdies in a row from the first to help him take the lead in International Series Korea.

Pavit, also a two-time winner on the Asian Tour, shot a sublime eight-under-par 63, with the preferred lies rule in play, at Lotte Skyhill Country Club Jeju to top the leaderboard ahead of Korean Eric Chun, in with a 65.

The most number of consecutive birdies on the Asian Tour is nine – achieved by Bernd Wiesberger from Austria at the 2017 Maybank Championship, impressively when preferred lies were not used.

However, Pavit’s feat did match the record for most birdies at the start of a round, which three others players have done.

The 33 year old said: “I was a little but lucky on the front nine, but I hit my long irons and mid-irons quite good. The first nine is quite long for me, I had about 170 to 180 yards mostly. I hit it close and made the putts. I think it is the first time I have had seven in a row.”

His eye-catching run came to an end with a bogey on eight, his only dropped shot of the day.
“I hit a bad shot on eight, that was the only mistake I made today, I pushed it off the green to the right. I had to accept that bogey, but everything flowed on the back nine, two birdies coming back,” he added.

He made birdies on 11 and 16 but also had numerous other chances to make gains.

“I didn’t think about a lower score [after seven birdies]. I just enjoyed my round today. I know I hit my driver good, and then I have a chance to hit from the fairways. I can spin the ball on the green here so that’s okay, I just need to hit the fairway first,” said the Thai.

His round today is the continuation of good form recently which saw him record top-15 finishes in his last two events, last week at the International Series Singapore and prior to that the Mandiri Indonesian Open.

Chun produced one of the finest tournament rounds of his 10-year professional career.

Two birdies on the front nine and four on the back at put him out in front for the first time in an Asian Tour event, when he took the clubhouse lead in the morning.

“I think there were a couple of holes that really defined the round for me,” said Chun.

He birdied the fourth and seventh to make the turn two under, before making further ground on the homeward stretch with birdies on 11, 12, 14 and 17.

He added: “After my putt dropped on the first I felt like I could hole everything, and I pretty much did, and my iron shots were pretty good. It’s definitely my best round recently, I haven’t been playing well recently so this is a good turn around for me.

“It is actually not an easy course, you have to hit good drives and make putts. So just going to start again tomorrow and try and shoot 65 everyday.”

A graduate of Northwestern University in the US, the Korean also spent much of childhood growing up in Malaysia, where he was one of the top junior golfers.

Jazz, who won four out of his six Asian Tour titles, including the Korea Open, when he claimed the Tour’s Order of Merit list in 2019, started on the back nine and made birdies on two of his last three holes to start the event strongly.

“It was just a normal round, easy going,” said Jazz.

“Nothing went wrong, nothing went special – it was a boring round which is what I like! I haven’t had one of those for a while. Golf is a weird game, sometimes you find it and sometimes you don’t find it. It is good to have one of these rounds after a couple of months.

“Maybe it is because I’m back in Asia and feel a bit more like at home. I can’t really tell, I can’t quite pinpoint what it is. Hopefully it will continue tomorrow, get some good food tonight and hope the trend continues!”

Harding, always a pre-tournament favourite boasting two Asian Tour wins as well as two on the DP World Tour, made six birdies and dropped one shot.

He said: “I am pretty pleased with it to be honest. I came out of the blocks nicely. I gave myself a lot of chances and rolled in a couple of putts. It felt pretty solid and then had a wobble halfway through.  Hit some poor shots but managed to keep the pars on the card.

“At the end of day I am a little grumpy and I would like to have not made bogey on the par three fifth, I would have liked to have not made bogey on seven. It’s got me in there with a shout and yeah I am looking forward to rest of the week. At the end of the day it’s not the guy who makes the most birdies, it’s the guy who makes the least bogeys.”