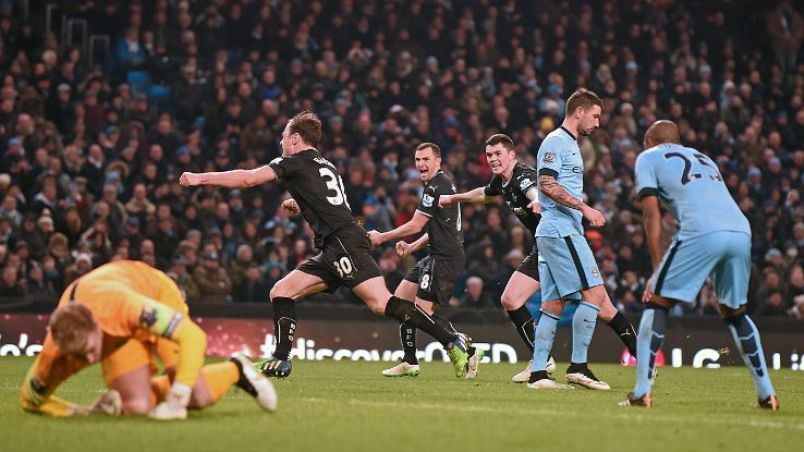 Manuel Pellegrini accused his Manchester City players of complacency after they allowed a two-goal lead to slip away in a costly 2-2 draw against lowly Burnley.

The defending champions wasted the opportunity to pull to within a point of Premier League leaders Chelsea, who were held by Southampton earlier on Sunday, after first half goals from David Silva and Fernandinho had put City well in control at Eastlands.

An early second half effort from Burnley’s George Boyd was followed by a dramatic 82nd minute equaliser from Ashley Barnes which ended City’s bid for a club record 10th consecutive victory.

“The way we’re playing, we need to run a lot of metres,” said Pellegrini.

“Maybe leading 2-0 we thought that the game was over but until the last whistle the game has never finished. We couldn’t continue with the same pace.

“In football, two balls can decide the score. At the beginning of the second half, Burnley scored a clear offside goal; after that, with a rebound, they scored the second.

“In the second half, they scored the early goal and that was very important for them. They grew a lot and had a lot of trust in what they could do.”

Pellegrini, who revealed he had left Yaya Toure out of his squad as a precaution after the Ivory Coast international reported a slight groin problem, remained defiant about City’s title chances despite the setback.

“Of course, this was a chance to have two points more, but not a chance for anything else,” he said.

“We have to play the complete second round (of fixtures). We have finished the first round with 43 points, which is a good amount of points.

“After leading 2-0, it’s more disappointing to lose the two points but we have all the second round to see who is the best team.”

Stevan Jovetic returned as a second half substitute, meaning City’s run of games without a fit, recognised first team forward is over, but news about the fitness of club captain Vincent Kompany, laid off with a hamstring injury, is less positive.

“We will see tomorrow if he’s fit for the next game,” said Pellegrini whose side next face Sunderland on New Year’s Day.

“It is very difficult to know for now. He still has some problems in his calf.”

Pellegrini also blamed the fixture schedule, and the fact his players had to perform on a heavy, snow-bound pitch at West Brom on Boxing Day, for their poor second half showing.

But opposite number Sean Dyche not only named the same starting line-up that lost to Liverpool on Boxing Day but also resisted the temptation to make a substitution during the 90 minutes at the Etihad.

“I find it incredible people are making that point,” said Dyche. “When I was playing, we would put out the same team if we were playing well.

“I don’t over-think it. If the team is ready to play, we play and today the players were ready to deliver.

“I keep reading about ‘struggling Burnley,’ But the expectation was we had no chance at all.

“If you look at the way the team is performing, we’re not struggling, we’re playing really well and I’m delighted with all the players.

“I’m intrigued to see where the journey is taking us and I’ve been very much enjoying the way the team has been playing.” – Agence France-Presse