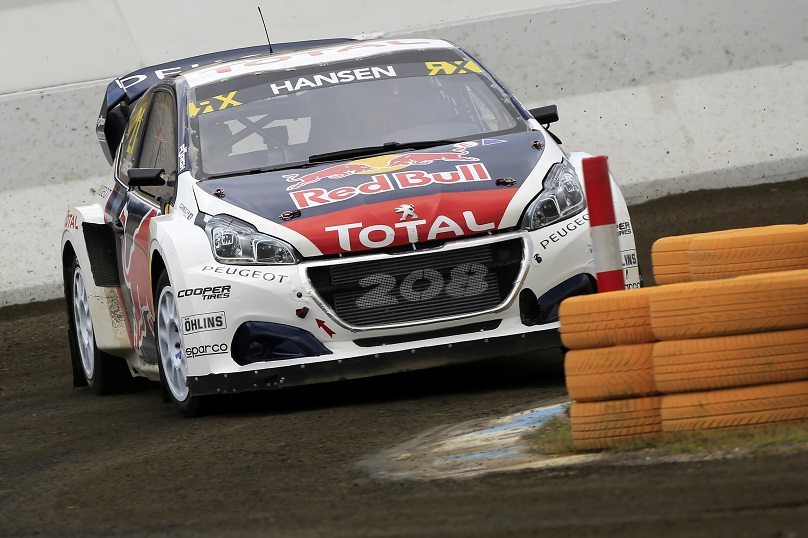 After dominating the qualifying phase of Round 3 of the 2017 FIA World Rallycross Championship at Hockenheim. Team Peugeot Hansen left Germany with a second straight podium finish ahead of next weekend’s clash at Mettet, Belgium.

• The first qualifying heat at Hockenheim saw the PEUGEOT 208 WRXs emerge as the cars to beat. Sébastien Loeb followed up his assertive Q1 victory with another in Q2, while Timmy Hansen took a convincing win in Q4. Sébastien Loeb and Timmy Hansen were consequently first and second overall after heats, with Kevin Hansen following in seventh spot after strong runs in Q1 and Q2.

• The team’s hopes for the semi-final phase were understandably high, but the conditions were rendered tricky after rain swept across the circuit just before the start. Both Sébastien Loeb and Timmy Hansen reached the final, but with second- and third-row starts respectively. The Swede responded by claiming his first top-three result of the season.

Quote, unquote…
Kenneth Hansen (Team Principal)
“We took a big leap forward today. When the conditions were dry, we were in our element and the result was three heat wins in qualifying. The semi-finals and final were more of a mixed bag after the rain, though, but Timmy ended up on the podium and Team Peugeot Hansen was the highest points-scorer at Hockenheim. That’s all very encouraging ahead of next weekend’s trip to Mettet…”

Timmy Hansen (driver, PEUGEOT 208 WRX #21), 3rd
“It was great to score my first podium finish of the season. My car was fantastic in qualifying but the conditions turned more delicate after it rained before the semi-finals. I started my semi-final from pole position but Kristoffersson was slightly faster on the damp track. In the final, I pushed as hard as possible but I couldn’t manage any better than third. That really wasn’t the sort of result we had been hoping for after qualifying but nobody can deny our potential on the dry and I believe we will be at least as competitive at Mettet.”

Sébastien Loeb (driver, PEUGEOT 208 WRX #9), 5th
“The final phase turned out to be far more complex than qualifying for us. The rain that fell just before the start of the semi-finals made the conditions extremely trick and slippery. I led into the first turn of the first semi-final but somebody then passed me and I also made a small mistake. I ended up third. I chose rain tyres for the final but it wasn’t the ideal call and I was unable to improve on my grid position. The two heats I won this weekend show that we are competitive, though. That’s a positive and we will be out to improve further at Mettet which is a track I enjoy. It was there that I finished on the podium for the first time.”

Kevin Hansen (driver, PEUGEOT 208 WRX #71), 8th
“Everything went very well on Day 1 and I managed to mix it with the championship’s pace-setters. I didn’t have the same feeling on Saturday, however, and I lost a little confidence. So ending up seventh after qualifying wasn’t so bad. I had hoped to find some of Friday’s form again in my semi-final and I was third at the first turn when sometime hit me hard from behind and forced me into a spin. After that, I couldn’t hope for much better than fifth. It was a frustrating weekend, so I’m glad there’s only a week to go until the next race!”