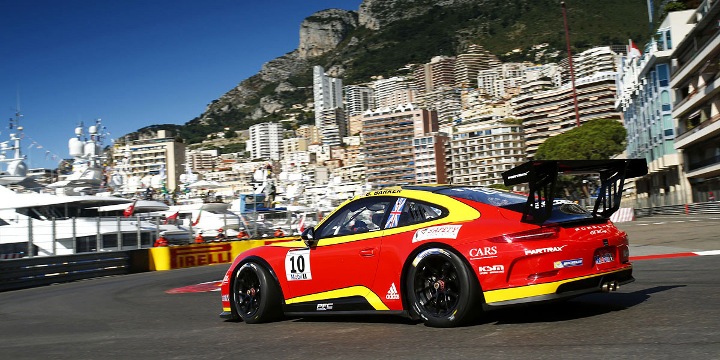 MOMO Megatron Team Partrax is hoping for a strong weekend in the 2016 Porsche Mobil 1 Supercup at Monaco. The race there is considered as the highlight of the season due to the very special atmosphere and track in the principality, so reaching the podium is extremely valued by everybody, as team principal Andreas Leberle can confirm. “We are really looking forward to show our strong form from Barcelona here as well. We were not far from the podium there – so hopefully we can do the final step here.”

Top favourite within the team for this achievement would be Ben Barker, as the Englishman already knows the streets of Monte Carlo quite well and managed to claim third place here already last year. “Of course qualifying is even more important here than anywhere else, as overtaking is nearly impossible. So every minute of practice time counts a lot. I just hope that contrary to Spain we will not be hit by any trouble, then I feel confident that quite a lot will be possible”, he is adamant. “For sure I want to repeat last years success – it was a great feeling for everybody in the team to get to the podium here.”

For Barker´s teammate Paul Rees it will be his Monte Carlo debut, which he is already looking forward to very much: “I can´t wait to hit the track here for the first time. I guess Monaco is special for any racing driver, with all the history you encounter at every corner,” he says, hoping to learn the track quite quickly and being able to deliver at least a Top Ten finish again after Barcelona. “That race was a great foundation to build on and we will just grown stronger and stronger.”

Dylan Pereira is also a newcomer at Monaco. The 19-year-old from Luxembourg feels more than a bit excited about the challenge: “It´s kind of a dream come true for me to be able to race her for the first time. Of course I know that I still have to learn a lot, but I will try everything to reach a good result for MOMO Megatron Team Partrax and also improve my position in the rookie classification, where I currently lie in third place.”

Afterwards the two of them together even managed to climb the highest step of the podium. Traditionally the end of each Porsche Sports Cup weekend is marked by the Sports Cup Endurance with two different heats of 50 minutes each, separated by a 15 minutes pitstop break for tyre change, refuelling and eventual driver change. In both races there is a ten minutes pitstop window for a mandatory driver change. Here Mauron and Rindlisbacher again managed to show their ability and finally crossed the finish line in first place.

“This is of course a great and to a fantastic weekend,” Mauron was ever so happy. “Thanks to the whole MOMO Megatron Team Partrax Team, which enabled us to reach such fantastic results already at our debut race in this series. It was a great start – now let´s continue this way. Also Rindlisbacher could not stop beaming all over his face: “To be on the podium twice at our first race weekend in this new series for me means a lot. It´s really great and I am glad I could immediately justify the confidence the team has put in me.”