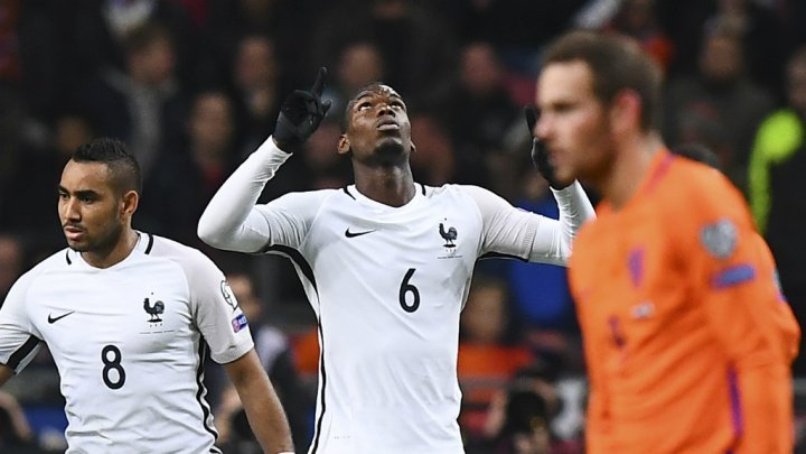 A searing first-half strike from Paul Pogba handed France a 1-0 win at rivals the Netherlands as Belgium and Portugal clocked up 6-0 victories and Christian Benteke grabbed a slice of World Cup qualifying history.

Criticised by coach Didier Deschamps for his performance in Friday’s 4-1 win over Bulgaria in Paris, the world’s most expensive footballer emphatically replied with a towering display for Les Bleus in Amsterdam in the most eye-catching fixture on Monday.

The Manchester United midfielder’s powerful hit from 25 metres out after half an hour left diving Dutch goalkeeper Maarten Stekelenburg able to get his hands to the fizzing ball but unable to stop it.

“I didn’t speak to him (Pogba), I just said a few words to him before entering the changing rooms, ‘I have confidence in you,'” said Deschamps.

“The match confirms what he is able to do. Pogba was much better in everything he did. He showed what he can do.

“We never doubted he could do it. We mustn’t forget Paul is relatively young and he can still progress.”

France, losing finalists on home soil at Euro 2016, are equal on seven points at the top of Group A with Sweden, who beat Bulgaria 3-0 at home in Solna. The two countries will play on November 11 at the Stade de France.

Pogba, 23, was imperial in front of a central defence made up of Raphael Varane and Laurent Koscielny, who pushed back wave after wave of Dutch attacks.

And Pogba nearly doubled his account with a header off a Dimitri Payet corner on 66 minutes just lacking power.

“We’re not going to talk about individual performances. It’s true it’s not always nice to hear criticism, ‘bad things’ about myself. There wasn’t any answer. Today it was a good team effort.”

The French had a slight scare in the final minute but Hugo Lloris did well to keep out a Memphis Depay effort on the line.

“It’s an important win for us, even if we could have had a larger lead,” said Deschamps.

“We could have hurt them more in the first half. It’s good to have got these two victories.”

The Dutch failed to make it to the Euros and now sit third in the group, needing to improve fast if they are to make it to Russia in 2018.

“Our goalkeeper made a mistake which he never makes in training,” said coach Danny Blind.

“We played better in the second half and we should have had at least a point because we had chances at the end of the match.”

Belgium and Portugal went on goal sprees against minnows Gibraltar and the Faroe Islands.

Belgium striker Benteke set a new World Cup record for the fastest goal ever — just seven seconds — on his way to a hat-trick in Faro.

Belgium top Group H on nine points out of nine, ahead of Greece on goal difference.

The 25-year-old Crystal Palace forward picked up the ball in the first action in Faro and racing towards goal with the Gibraltar defence in disarray left goalie Deren Ibrahim with no chance.

Portugal, bidding to catch Group B leaders Switzerland, matched their 6-0 win over Andorra on Friday.

Andre Silva scored a hat-trick for the European champions before captain Cristiano Ronaldo netted his fifth goal in four days, with Joao Cancelo and Joao Moutinho also scoring late on.

Switzerland maintained their unbeaten run, coming away 2-1 winners from Andorra with Fabian Schaer and Admir Mehmedi scoring in either half. – Agence France-Presse