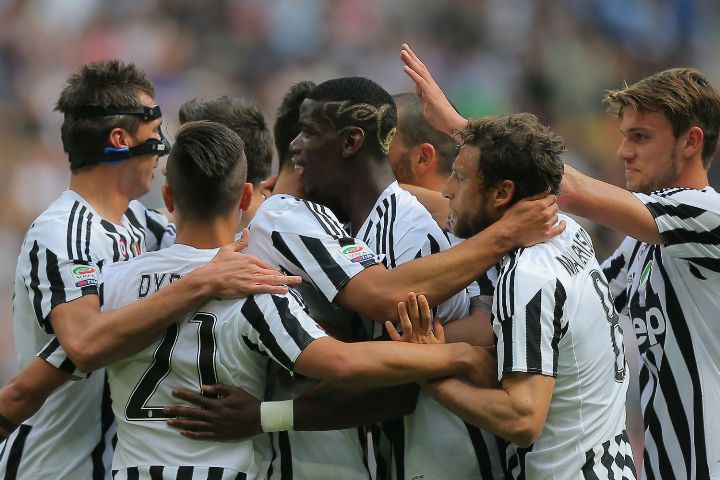 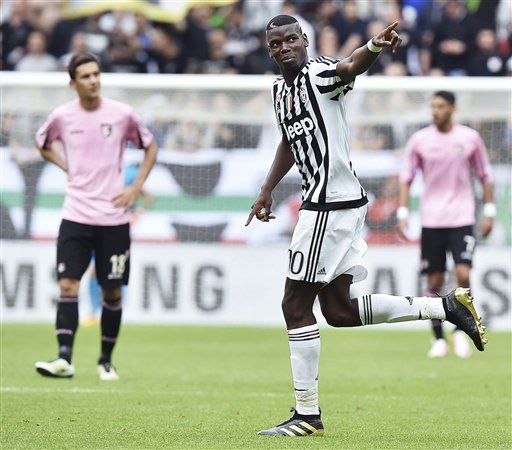 Paul Pogba inspired a second-half blitz as champions Juventus put one hand on a record-equalling fifth Serie A title on Sunday with a 4-0 win over Palermo.

Juventus last achieved the feat of five straight league titles in 1935, and the Turin giants were given extra incentive when title challengers Napoli suffered their second reverse in three games with a 2-0 defeat to Inter Milan Saturday.

It left Napoli in second at six points behind but Juventus turned the screw to leave Maurizio Sarri’s men nine points adrift with five games remaining this season.

The grin on Juve coach Massimiliano Allegri’s face relayed the joy displayed by all of Juve’s top brass in Turin on Sunday, including sporting director Pavel Nedved. But Allegri insisted it’s still too early to celebrate.

“We have a nine-point lead and a good goals difference, but the scudetto fight isn’t over yet,” Allegri told Mediaset.

“We still have to win two games and draw one, then we can talk about the title.”

Juventus, stretching their unbeaten run to 23 games, broke the deadlock on 10 minutes when Germany midfielder Khedira controlled Pogba’s cross on his chest before volleying past Stefano Sorrentino from close range.

Palermo were unlucky not to level before the interval when Juve ‘keeper Gianluigi Buffon was called into action on several occasions before seeing defender Andrea Barzagli clear Aleksandar Trajkovski’s delicate shot off the line.

But Juve finally turned the screw in the 71st minute, Pogba converting at the back post after Alvaro Morata made contact with Juan Cuadrado’s corner. Further strikes from Cuadrado and late substitute Simone Padoin wrapped up the win.

Napoli now appear out of the title race and will remain wary of Roma, who struggled to a 3-3 draw at Atalanta but remain in contention for the league’s second automatic Champions League qualifying spot.

Roma coach Luciano Spalletti was not a happy man after seeing his side let slip a two-goal lead, club icon Francesco Totti coming off the bench to secure a share of the spoils with his 245th Serie A goal.

“If they had scored a fourth goal, it was all over for us,” said Spalletti, reported to have had a row with Totti afterwards.

Roma remain in third at five points behind Napoli, and Inter’s precious win on Saturday means Roberto Mancini’s men are only four points adrift of the Giallorossi in fourth.

Fiorentina are fifth, but closed the gap on Inter to two points thanks to a 3-1 win over Sassuolo that saw an impressive volley from Viola midfieler Josip Ilicic and an incredible own goal by visiting ‘keeper Andrea Consigli.

Elsewhere, a first-half penalty from Antonio Candreva and a 44th minute strike by Ogenyi Onazi handed Lazio a 2-0 win over Empoli, coach Simone Inzaghi’s first at the Stadio Olimpico since he replaced Stefano Pioli two weeks ago, having started his appointment with a 3-0 win at Palermo last time out.

Lazio remain eighth and are still four points behind AC Milan, who sit in sixth and a possible Europa League spot after a cagey 1-0 win at Sampdoria.

It was Cristian Brocchi’s first game in charge since he was promoted as youth team coach to replace sacked Sinisa Mihajlovic last week.

Brocchi ditched Mihajlovic’s 4-4-2 to deploy a 4-3-1-2 with Giacomo Bonaventura playing just behind Mario Balotelli and Carlos Bacca, and it ultimately paid dividends.

After Bacca came close on seven minutes, Sampdoria had a goal chalked off when Fabio Quagliarella was ruled offside having nodded Fernando’s spectacular overhead kick into the path of Dodo, who tapped past Gianluigi Donnarumma and into the net.

Bacca saw his attempted chip over Viviano deflected by the ‘keeper on the hour, then Juraj Kucka fired wide of the far post after a great build-up with Bacca.

Bacca eventually broke the deadlock on 71 minutes to end the seven-time European champions’ five-game winless streak and hand Brocchi his first win as coach in Serie A. – Agence France-Presse