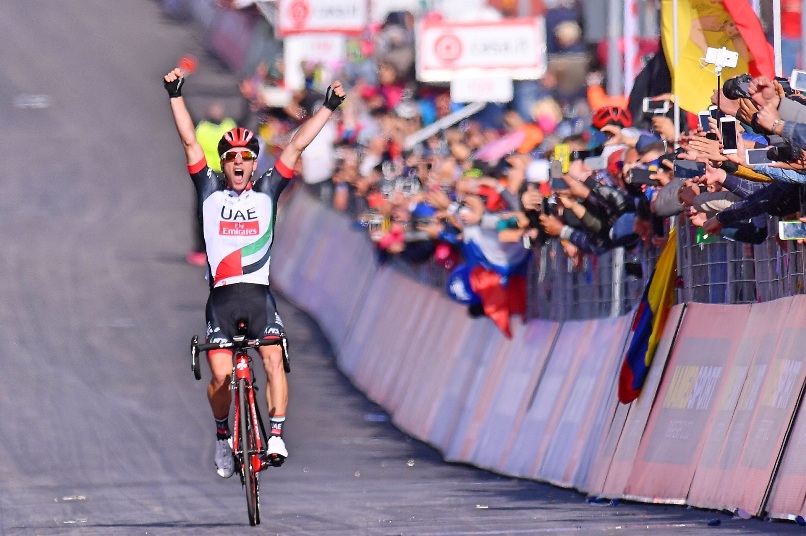 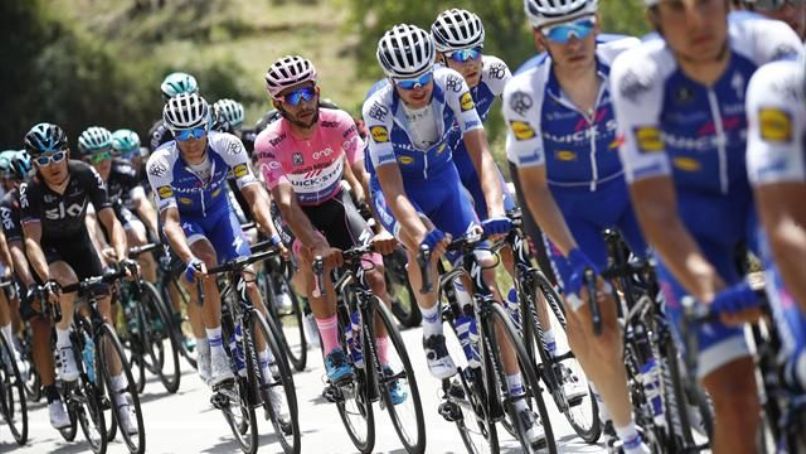 Climbing specialist Polanc, who races for the United Arab Emirates (UAE) team, was part of a four-man breakaway that pulled free early in the 181 km ride from Cefalu.

Despite being left on his own for the last 16 km of the 18.1 km climb to the summit, Polanc held on to solo over the finish line in just over 4hr 55min.

“It was probably the hardest day of my life,” said Polanc. And most of the peloton agreed.

While locals are used to seeing sparks from the regular eruptions on Europe’s highest active volcano, a tough headwind ended hopes of a stage four duel between defending champion Vincenzo Nibali and Colombian challenger Nairo Quintana.

“The climb was difficult with a constant headwind, especially after a long break,” added Polanc, who finished 19secs ahead of Russia’s Ilnur Zakarin after the Katusha rider made a last-gasp bid for glory.

A reduced peloton containing all the main favourites crossed the line 29secs behind the Slovenian, Britain’s Geraint Thomas (Sky) beating France’s Thibaut Pinot to finish third and claim precious bonus seconds that moved him up to second overall.

The Welshman, leading Team Sky’s bid for glory along with Spaniard Mikel Landa, is now six seconds behind Jungels with compatriot Adam Yates (Orica) in third at 10.

Claiming he felt “good”, Thomas said the expected hostilities were tempered by the tough conditions.

“It (the climb) didn’t go ballistic, there was a strong headwind and it’s the first big stage of the race,” said Thomas.

“Everyone was unsure, testing each other, it was a little bit of cat and mouse.”

Despite his reputed climbing abilities, Polanc was given little chance of taking his escape all the way to the finish from a four-man breakaway that went early in the stage.

But after the peloton upped the pace significantly with 30km to race to begin eating into their deficit, the Slovenian was given a gentle push to the finish.

A straightforward, right-hand bend on a wide road caused confusion, some riders hesitating to take the bend while others rode straight on.

The scene would have been comical had it not left several stage contenders, including Steven Kruijswijk and Zakarin, among the bodies lying on the ground suffering road rash.

It was the second disaster in four days of racing for the pair, who are among several riders looking for a podium finish.

“I’m not so good. I crashed pretty hard, which wasn’t great just before the climb,” said Kruijswijk, who saw his hopes of winning the 2016 race crushed by a crash while chasing Nibali on the descent of the Colle dell’Agnello.

A number of solo attacks came and went in the final kilometres, but none stuck.

Astana veteran Paolo Tiralongo, 39, had hoped to dedicate a victory to former teammate Michele Scarponi, whose death in a training ride accident last month has prompted fans to display banners in memory of the 37-year-old Italian.

But the Astana rider was quickly reeled in, as was Frenchman Pierre Rolland after an attempt 12km from the finish that lasted only minutes.

Three kilometres from the finish, Nibali pulled away from the chasing peloton in a move designed more, said Bahrain teammate Giovanni Visconti, to see how his rivals would respond.

“He’s (Nibali) obviously not in peak form yet, but it will be different by the time he arrives on the third week,” said Visconti. – Agence France-Presse