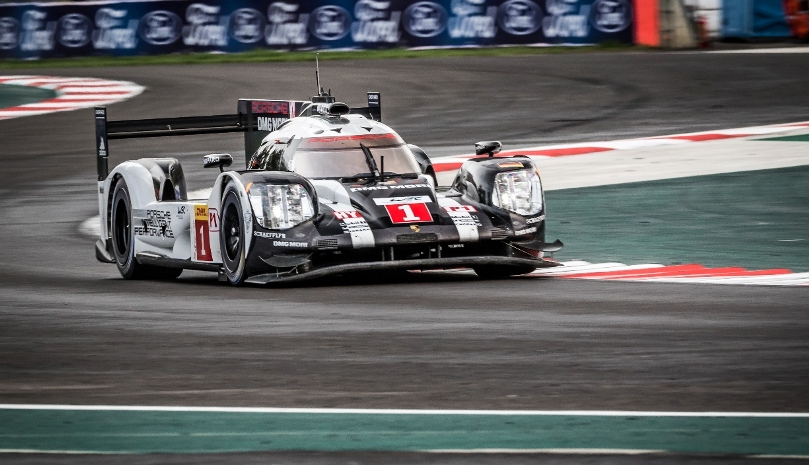 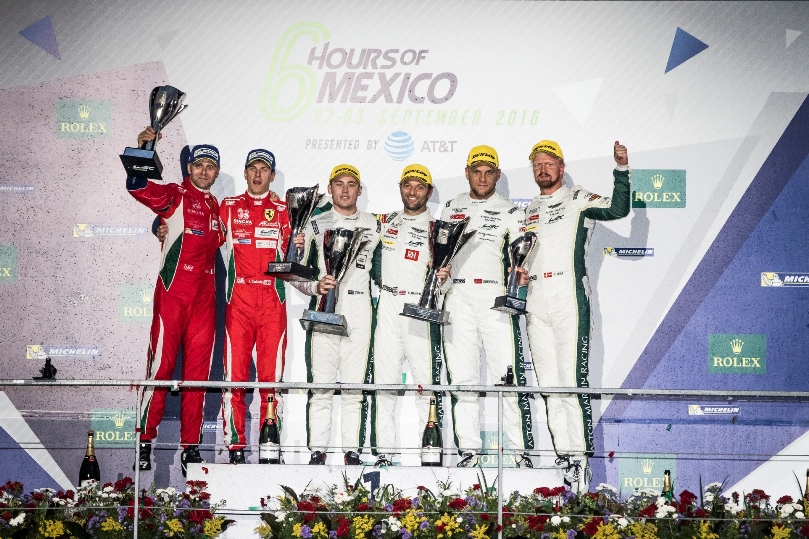 The fifth round of the FIA World Endurance Championship in Mexico saw a six hour race that had drama and excitement that had the large and enthusiastic Mexican crowd on the edge of their seats.  The weather also played its part with two periods of rain forcing the teams to adjust their strategy to cope with the changing conditions.

The No.1 Porsche 919 Hybrid of Mark Webber, Brendon Hartley and Timo Bernhard took their second win of the season but they had to overcome some setbacks to come through to take the chequered flag ahead of the No.7 Audi R18 of Andre Lotterer and Marcel Fassler and the No.6 Toyota TS050 of Mike Conway, Stephane Sarrazin and Kamui Kobayashi.

In LMP2 it was joy for the Mexican fans as the RGR Sport by Morand Ligier of Ricardo Gonzalez, Bruno Senna and Filipe Albuquerque took a home win for the Mexican team, their second victory of 2016.  Albuquerque raced for more than two hours in the extremely tricky track conditions to bring the car home just 2 seconds ahead of the No.36 Signatech Alpine of Nicolas Lapierre.

The No.26 G-Drive Racing Oreca was fast in race trim and Rene Rast was holding a comfortable lead when brake failure forced the German into the pits and out of contention for the victory.

In LMGTE Pro the No.97 Aston Martin Racing Vantage of Darren Turner and Richie Stanaway gave the British manufacturer its first victory in the category this season, finishing just 0.9 seconds ahead of the No.51 AF Corse Ferrari 488 of Gianmaria Bruni and James Calado, with the No.95 Aston Martin of Nicki Thiim and Marco Sorensen just 18 seconds behind their teammates.

In LMGTE Am the No.88 Abu Dhabi Proton Racing Porsche 911 of Pat Long, Khaled Al Quabaisi and David Heinemeier Hansson scored their first win of 2016, one lap ahead of the No.83 AF Corse Ferrari 456 of Emmanuel Collard, Rui Aguas and Francois Perrodo.

Audi led at the start with the No.7 Audi moving up from 3rd to 1st on the opening lap with the two Porsches in 3rd and 4th but an early stop for Lotterer in the no7 Audi dropped him back to 6th.

The first of two Full Course Yellows was declared in the first hour after the No.37 SMP Racing BR01 of Victor Shaytar hit the wall at Turn 11, putting debris on the track.  After the race went green again the Porsche’s began the fight back and Webber took the lead in the No.1 919 when the No.8 Audi of Lucas di Grassi was forced wide avoiding some spinning back markers.   The G-Drive Racing Oreca had moved up from 4th on the grid and was fighting with the No.43 RGR Sport Ligier.  After the pitstops the Russian team were ahead of the Mexicans.

There was contact between the No.6 Toyota and the No.31 ESM Ligier, which saw Conway handed a drive through penalty for the incident.  Toyota’s problems were still not over when the no5 TS050 was pushed back into the garage with an issue with the hybrid system that eventually meant the car’s retirement. 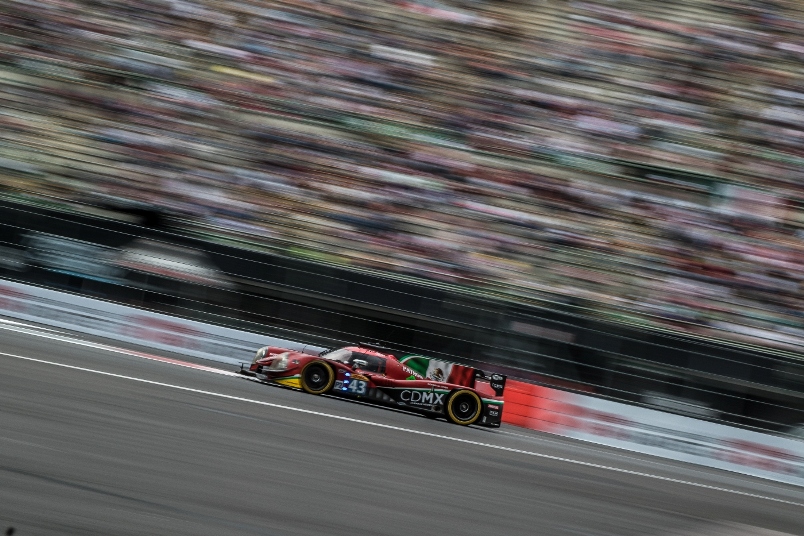 In LMGTE Pro it was the no95 Aston Martin leading ahead of the No.97 Vantage.  Early contact between the no51 Ferrari and no66 Ford GT saw Olivier Pla facing the wrong way on the exit of the stadium section in the Ford.  In the LMGTE Am class it was a 1-2-3 for Porsche, with the no86 Gulf Racing 911 leading the No.88 Abu Dhabi Proton Racing Porsche.

The No.98 Aston Martin was making its way up from the back of the grid but an ambitious move saw contact with the No.83 Ferrari and the No.98 had to serve a drive through penalty, undoing all the good work. The bad luck continued when the No.66 Ford pushed the Aston Martin into the wall at Turn 12.  Paul Dalla Lana recovered the car to the pits and the Ford had to serve a drive through.

The battle between the No.26 G Drive Oreca  and No.43 RGR Sport Ligier continued to rage, with a clash that resulted in the Oreca heading to the pits with front left damage.

The second Full Course Yellow was called to clear debris from the track after a collision between the No.27 SMP Racing BR01 and the No.30 ESM Ligier. Timo Bernhard in the No.1 Porsche headed to the pits but appeared to change his mind and crossed the white line to rejoin the track.  This resulted in a drive through penalty.  After 10 minutes the race went green again with reports of rain from parts of the circuit.

The No.8 Audi of Loic Duval was leading the race from the No.1 Porsche of Hartley and the No.2 Porsche of Lieb but the Audi was soon caught and passed by both 919s.  The rain now started to fall heavily and the Porsches pitted for wets.

The Audi stayed out for an extra lap before coming in for intermediate tyres and to hand over to Oliver Jarvis.  Jarvis rejoined the track only for a wheel bearing failure and pitch the Audi into the barriers in Turn One.  The British driver recovered the car to the pits but extensive repairs meant the car that started on pole position was out of contention.

In LMGTE Am the No.78 KCMG Porsche was leading from the no88 Proton Racing 911 but a puncture forced the KCMG car into the pits.

Andre Lotterer in the No.7 Audi was now leading after the No.1 Porsche pitted for fuel and slick tyres on the drying track but the roles soon reversed as Lotterer took his pitstop.  The Audi was the quickest  car on track and Lotterer was pushing hard to catch the lead Porsche.  However as he entered the stadium area he locked up and went straight on, hitting the wall and losing 30 seconds rejoining the track.

It looked to be all over as the no.1 Porsche of Timo Bernhard had a large lead.  However with the rain returning Bernhard went straight on at the last corner and narrowly missed hitting the wall.  The German lost several seconds rejoining the track but he still held a healthy lead over the chasing Audi.

The No.50 Larbre Competition Corvette of Yutaka Yamagishi spun off at Turn 12 and speared into the wall, causing the marshals to display waved yellows for the remaining five minutes of the race.

At the chequered flag it was victory for Porsche ahead of Audi and Toyota, but the biggest cheer was for Filipe Albuquerque who crossed the line to give the RGR Sport by Morand team a home win for the Mexican team and for his Mexican teammate Ricardo Gonzalez.

The next round of the FIA World Endurance Championship will be at the Circuit of The Americas in Austin, Texas on Saturday 17 September.