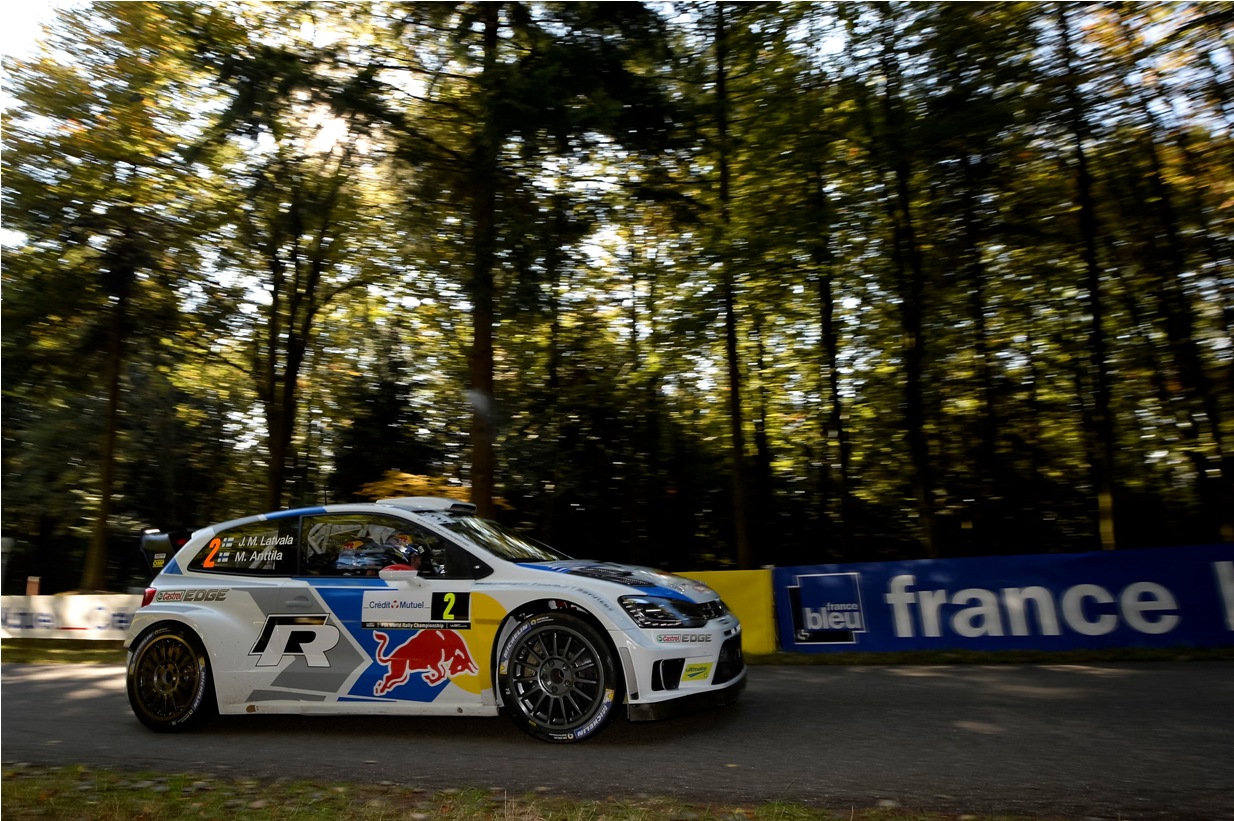 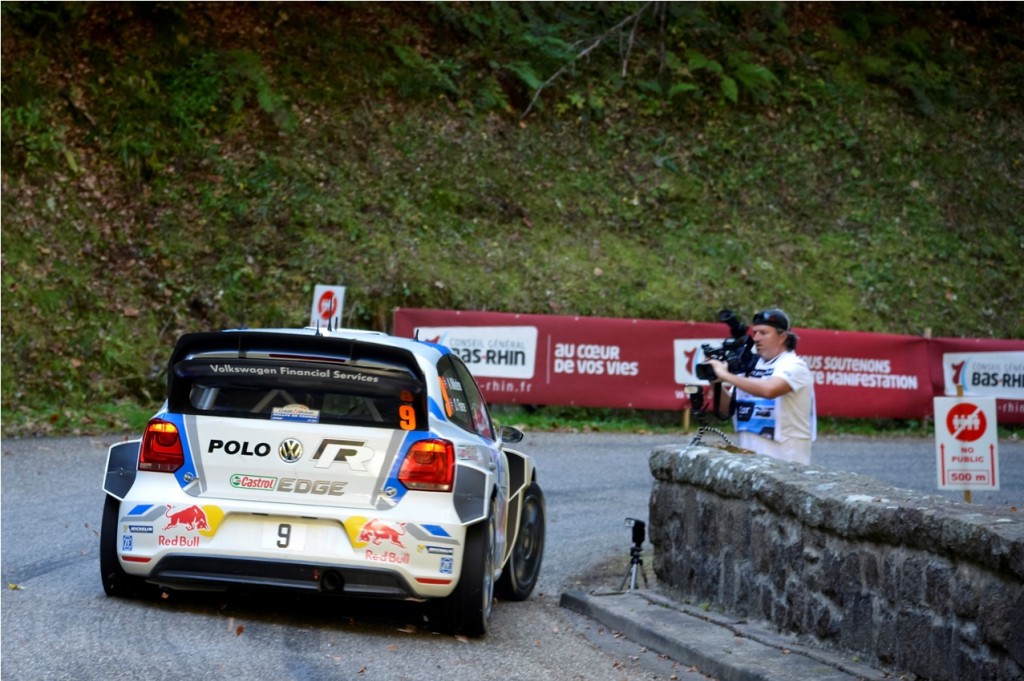 Finnish party in Alsace – Jari-Matti Latvala and Miikka Anttila won the Rally France and made history in the process. The Volkswagen duo is the first Finnish pairing for just short of 15 years to win an all-asphalt round of the FIA World Rally Championship (WRC). With their fourth win of the season, the twelfth of their career and the fifth in a Polo R WRC, Latvala/Anttila kept the race for the title in the Drivers’ and Co-Drivers’ Championship well and truly alive.
Andreas Mikkelsen/Ola Fløene (N/N) finished runner-up to complete the historic result and present Volkswagen with its seventh one-two of the season. Fans must remain patient to discover which Volkswagen duo will eventually secure the Drivers’ and Co-Drivers’ title in the World Championship: Sébastien Ogier/Julien Ingrassia (F/F) ended their home leg of the World Rally Championship in 13th place, but did win the Power Stage to pick up three valuable bonus points.

Victory for Latvala/Anttila was Volkswagen’s 20th in the World Rally Championship with the Polo R WRC – from 24 outings. The manufacturer now has 38 podium finishes to its name since first lining up at the Rally Monte Carlo in January 2013.

“In finishing first and second, we have continued exactly where we left off with the superb result in Australia,” said Dr. Heinz-Jakob Neußer, Volkswagen Board Member for Technical Development. “Our drivers all drove at the highest level. Jari-Matti Latvala is not only among the very best on snow and gravel, but is also extremely quick on asphalt. He is now a member of the exclusive club of rally drivers who have won on every surface. Our rising star Andreas Mikkelsen is a regular feature on the podium, and it is only a question of time until he picks up his first win. Sébastien Ogier showed his extra class with the outstanding Power Stage win. The World Championship remains exciting and our fans cannot wait to discover which Volkswagen driver will ultimately be crowned world champion.”

14 years, eleven months and 23 days – that is how long has passed since Tommi Mäkinen became the last Finn, before today, to win an all-asphalt round of the World Rally Championship. That is exactly 5,471 days between the Mitsubishi driver’s success at the 1999 Rally San Remo and Jari-Matti Latvala’s win at the 2014 Rally France. The long-awaited first win of Latvala/Anttila’s career on this surface was confirmed at 12:47:33 on Sunday afternoon. And it came about in dominant fashion: Latvala/Anttila took the lead of the Rally France on the opening stage, and surrendered it only briefly for just one stage to team-mates Mikkelsen/Fløene. They won nine of the 18 special stages, finishing in the top three on six of the remaining nine stages. Their only compatriots ever to win on asphalt before today were Tommi Mäkinen and Markku Alén.

High speed: The Rally France is a real challenge on asphalt

With its fast but narrow asphalt roads through thick forests and small villages, the Rally France represents a genuine challenge for the teams. The consistently high speed made this the fastest asphalt rally in the history of the WRC. With an average speed of 115.07 km/h, the Rally France was the third fastest rally of 2014, after the Rally Finland (122.09 km/h) and the Rally Poland (118.5 km/h). Volkswagen won 17 of the 18 special stages with the Polo R WRC, the Volkswagen duos occupying a total of 42 top-three positions over the course of the rally.

Sweden, Poland, Germany, Australia, and now France – Andreas Mikkelsen celebrated his fifth podium of the season in Alsace, adding another highlight to what has been a dream year in the World Rally Championship. This was also the fourth podium of co-driver Ola Fløene’s career – and a valuable one at that. Second place in France sees Fløene, who only took his place at the side of Andreas Mikkelsen in the Polo R WRC at the fifth rally of the season, climb into third place overall in the Co-Drivers’ Championship. As such, the dream of finishing third overall is drawing ever closer for both Mikkelsen and Fløene: Andreas Mikkelsen is now 50 points clear of Mikko Hirvonen (M-Sport Ford). Should he still hold an advantage of at least 28 points after the coming Rally Spain (23-26 October), he will be out of reach in third place.

First a set-back, then a fightback – Ogier/Ingrassia take the Power Stage

A small sensor dashed any hopes of a home victory and securing the Drivers’ Championship with two rallies still to come: Sébastien Ogier/Julien Ingrassia lost over eight minutes at the very start of the Rally France due to a faulty sensor and a time card error. Whilst others may have thrown in the towel, the World Championship leader and defending champions in the Drivers’ and Co-Drivers’ Championship fought back from 30th to finish 1th overall. More importantly, Ogier and Ingrassia won the closing Power Stage, on which bonus points were awarded to the fastest three cars. Their team-mates Jari-Matti Latvala/Miikka Anttila finished third on the Power Stage, for which they also picked up an extra point. In the 23 Power Stages since January 2013, the Volkswagen duos have scored extra points on 41 occasions.

A 27-point lead – the Rally Spain, the 12th of this season’s 13 races, presents Sébastien Ogier and Julien Ingrassia with their second opportunity to successfully defend the World Championship title they won in 2013. Should they score one point more than Latvala/Anttila in Spain, the crown will be theirs.

Quotes after day three of the Rally France

Sébastien Ogier, Volkswagen Polo R WRC #1
“We got as much as possible out of this weekend with victory on the Power Stage. All in all, the Rally France did not really go well for us, but Julien and I still lead the World Championship by 27 points. Congratulations to Jari-Matti on an impressive display. I would like to thank the French fans for their fantastic support. That meant an awful lot to me and Julien. Unfortunately, however, we have received bad news from Japan today: my friend Jules Bianchi has had a bad crash at the Formula One Grand Prix in Suzuka. I hope he makes a speedy recovery.”

Jari-Matti Latvala, Volkswagen Polo R WRC #2
“A great and important win for us. For years I have worked hard to win my first asphalt rally. Unfortunately I missed out on the chance in Germany, but I have now shown that I learned from my mistake and went away and improved. With this win I would like to thank Volkswagen and the entire team for the magnificent support. Every rally driver dreams of winning on asphalt, gravel and snow, and I am overjoyed to have finally achieved this milestone. The World Championship is still wide open and all WRC fans can look forward to an exciting Rally Spain.”

Andreas Mikkelsen, Volkswagen Polo R WRC #9
“An absolutely outstanding Rally France for us! We have improved greatly on asphalt since the Rally Germany. We feel more at home than ever on this surface in the Polo. We prepared perfectly during the tests and developed a really good set-up. Friday was superb, as was Saturday – but we were unable to match the pace of my team-mate Jari-Matti Latvala. After that we focussed on securing second place. It feels absolutely awesome to have achieved that on asphalt. Not bad for a Norwegian, hey?”

Jost Capito, Volkswagen Motorsport Director
“Today is a very special day for Jari-Matti Latvala and Miikka Anttila. And also for the World Rally Championship. It is almost 15 years since a Finn won an all-asphalt rally. With this historic performance, they have kept the title race alive. It is a very comfortable situation to know that it can only be a Volkswagen driver who is eventually crowned world champion. However, we have even more reason to be proud today: Andreas Mikkelsen and Ola Fløene crowned an outstanding performance with second place today. Having been hugely unlucky on Friday, Sébastien Ogier and Julien Ingrassia won the Power Stage to make the best of an unfortunate situation. They can still successfully defend their World Championship title without having to depend on others’ results. All in all, we are proud of the performance of the entire team, and of our seventh one-two of the season.”

… the motto of the day. “Build. Race. Party.” The Volkswagen team will bring these words to life on Sunday evening. The title win* in the WRC Manufacturers’ Championship will be celebrated in the Service Park. As well as journalists and officials, the Hyundai, Citroën and M-Sport Ford teams are obviously also invited. Having won the title in Australia, where it was not possible to hold a big party, this is Volkswagen’s way of catching up on the World Championship celebrations.